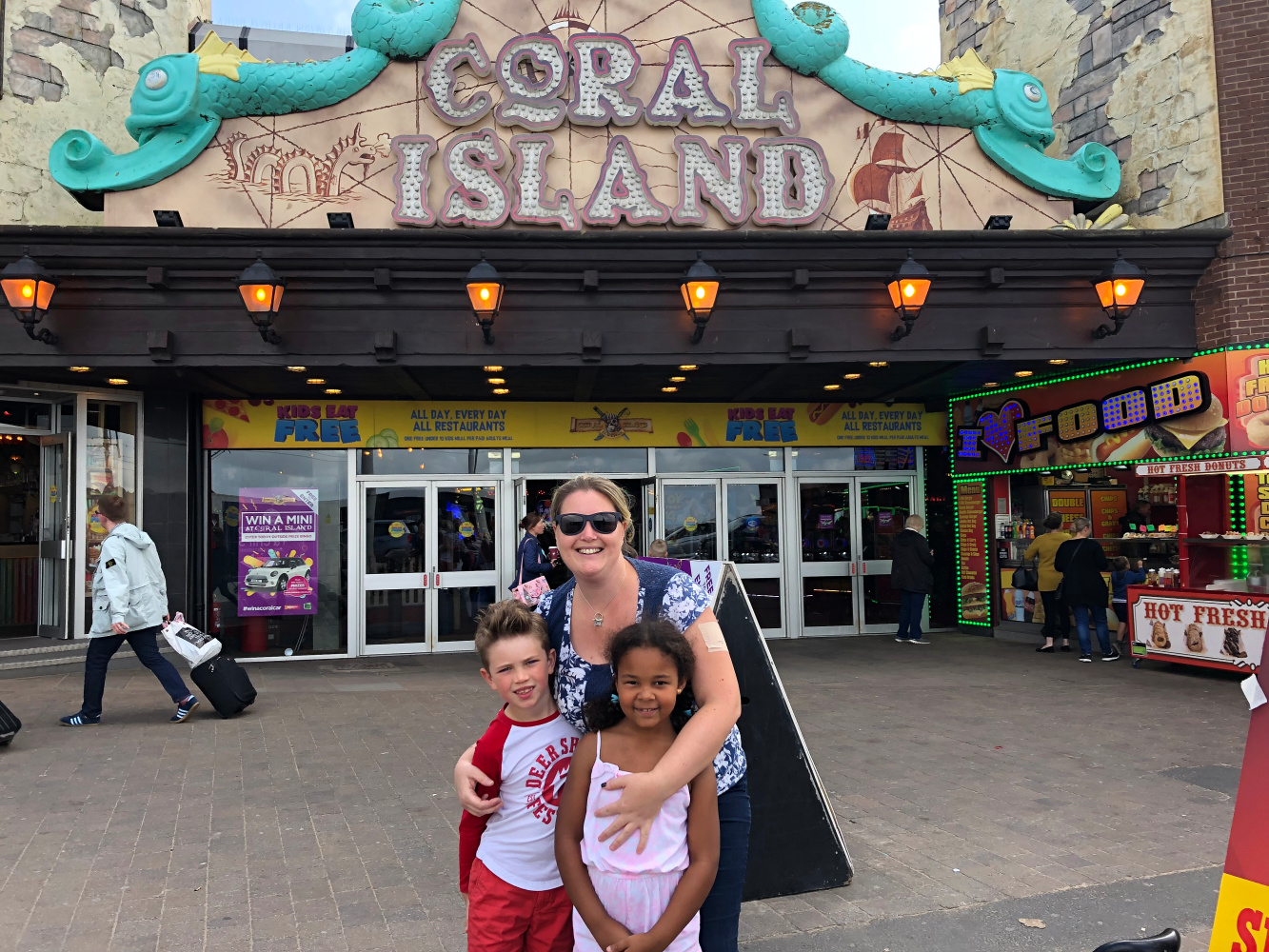 Disclosure: We received payment for our hotel and travel costs and were given vouchers, meal vouchers and money to spend in Coral Island. Despite this, all views are my own and unbiased.

Coral Island is located just to the right of Blackpool Tower on the Central Promenade (with your back to the sea) and almost directly opposite the Tower tram stop. There is also a large car park near to the back entrance of the amusement centre.

What is Coral Island?

In other words, it is a huge, indoor amusements, pirate-themed and similar to those you find in other UK seaside towns, but huge and oh so different in many ways.

First of all, Coral Island has 3 rides – the type that you would usually find at a fairground. The Pirate Flyer, a Ghost Train and a mini-coaster for younger and smaller children. (Bear and his friend were too tall to ride at 1.3m)

The Pirate Flyer is a monorail that travels around the amusement centre, above the families and attractions. It seats 4 and in the front two seats, there are imitation pirate guns that you can aim at targets throughout the building.

I took Bear and one of his best friends on our trip to Blackpool and we all enjoyed the Pirate Flyer. The kids loved the view and getting a birds-eye view of the amusements. They planned their next move from above and I enjoyed a rest!

You do have to climb a staircase to get to the ride which I managed the first couple of times but due to my health conditions and disabilities, I couldn’t climb them for a third time. There is a small area near the stairs, that you can leave pushchairs in but there is no other access. We were lucky and the queues were very small but if you do have to wait and have health conditions like myself, be aware that you will have to stand.

The Pirate Flyer costs £2 per rider and you purchase your tickets from a machine at the bottom of the staircase to the ride.

The ghost train is child-friendly in that there aren’t any crazy jump scares and although it is dark, there are glow in the dark and lit up skeleton pirates etc. Each carriage only seats 2 people and goes through the shipwreck one at a time which made it a bit tricky for our party of 3. Bear was super brave and went through before his friend and I, on his own and we followed. Bless his heart, he said that it was ok but he didn’t want to ride it on his own again!

Like the Pirate Flier, the Ghost Train was upstairs so bear this in mind if you have physical difficulties. This ride also cost £2 per rider.

The mini coaster has multiple vehicles for little ones to pretend to drive or ride as it takes them around a track with a slight incline.

A lot of the machines and games give you tickets that you can exchange for prizes. 10 tickets can be exchanged for sweets, 50 tickets for a small pot of slime and lots more choices up to the thousands with prizes including games consoles! The choices were vast and the staff were very patient with the children whose eyes were blinded by the huge array of prizes. This does lead to queues but you are grateful when it’s your child’s turn to choose.

One thing that neither Bear or his friend had ever tried, was a Virtual Reality ‘ride’. The ride is Virtual Rabbids (Rabbids are rabbit-like creatures from a computer game) and you can choose from lots of different tracks. The children chose a Christmas / Winter themed ride and they absolutely LOVED it! IT was the highlight of their day and they would have had multiple rides, had it not cost £3 per person. However, it was a fabulous experience and worth it for myself and the group of people that stopped to watch their hilarious reactions!

You climb aboard the ride and fit the goggles with elastic and velcro fastening and then choose your theme. As the computer-generated visuals take you on a sledge ride (in this instance), the machine moves the seat in time with the corners and tips you slightly forward and backward with the motion of the sledge. The children were shrieking, giggling and laughing, waving and saying hello to the animals and characters in the game, looking all around and enjoyed what I thought was a fair amount of time on the ride.

There is a large screen above the ride, which shows those who are not on the ride, what the riders are looking at.

Another difference between Coral Island and other amusements is that they have 3 Pirate themed restaurants and a further 3 award-winning Fish and Chip shops – 2 that you can choose to eat in or take away and 1 takeaway. In all of the eateries, ‘Kids Eat Free” with every adult meal purchased.

We ate lunch at Peggy’s Snack Bar. You take a tray and queue as you enter the snack bar and request your food choice, receive it, request your drink and pay before looking for your seat. The snack bar was quite busy but we didn’t have to queue for long and found a free table immediately. The children both had a burger and chips which was quite basic but they enjoyed it and were very excited to have a slush with it. I had a jacket potato with beans which was tasty and hot and I believe there was one other vegetarian option – a pasta dish. I think Peggy’s Snack Bar is a great choice for classic and traditional meals at great prices. We went to Peggy’s as soon as we arrived at it fuelled our 4 hour visit and then some!

At the end of our day, the children ate at one of their fish and chip bars and thoroughly enjoyed their Sausage and Chips with a carton of juice.

Alongside your traditional amusement attractions, Coral Island has a fabulous Camel Derby and a Bingo room.

The Camel Derby was so much fun! You take a seat and for £1, roll your 3 balls, aiming for the coloured holes, to make your camel race. The red hole makes your camel run the fastest, the blue medium speed and yellow the slowest. It was definitely the children’s favourite attraction and they were disappointed when I said that enough was enough. There is a winner every time and a fab choice of prizes.

The Bingo was surprisingly easy for all three of us. I had images of trying to help myself and the children find the numbers as they were called but I was pleased to see that each player had their own electronic screen to play with. Then I was told that we played 6 boards at a time and I had no idea how we’d scan so many until a member of staff helpfully told us to press the middle button on the bottom left board and that automatically stamped out numbers for us! It does slightly take a bit of the fun away – that little bit of panic when you look to see if your number is on the board definitely helps to build the suspense but for children, this meant that they could play independently. Bear’s friend was a winner!

We had so much fun at Coral Island. We arrived at lunchtime and spent our entire afternoon inside the amusements. We left and blinked as we entered the late afternoon sun – as I imagine you do after being in a casino in Las Vegas! It was clean and warm inside Coral Island, just what you need to make the most of a British Summer.