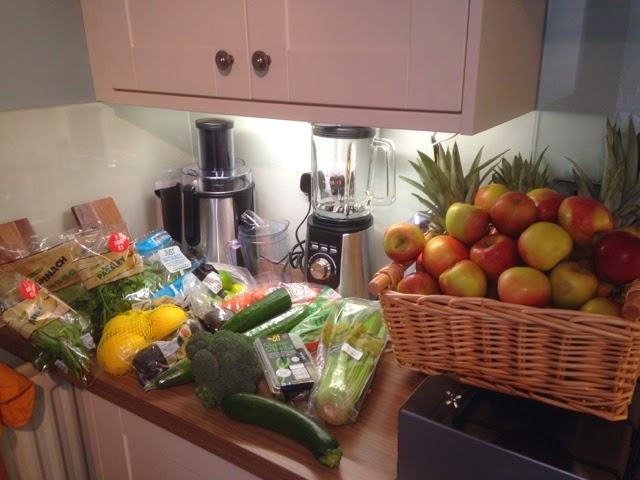 I’ve been feeling so unwell since whenever and so I decided it was time to try something new- obviously different from the medical professionals, so this is it! My last supper (or at least it will be later) and my last glass of wine 🙁 for at least 7 days! I imagine it will be longer though as I think this will be a part of my life for the foreseeable.

I’m starting the juicing diet/regime/ way of life, for weight loss- I’m still 2 stone overweight after having my baby. 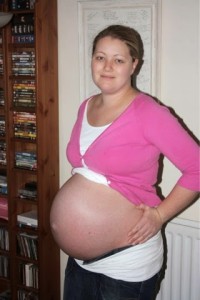 Oucha! This was about 4hrs before he was born by elective Caesarean due to my health issues.
Hmmn. My baby is 2yrs old though now. I should have lost the extra weight by now. Oops!! 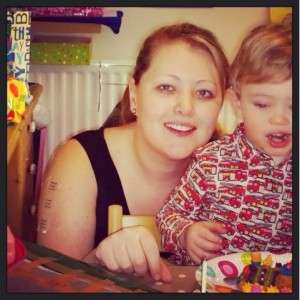 I’ve had a tough two years though and haven’t been able to exercise- at times, barely able to move and so the weight didn’t drop off. That takes me to the next reason why I am starting this- health. I have fibromyalgia which is a chronic pain condition and also likes to cause chronic fatigue. Alongside this, have a bad back, hips and pelvis, that started in pregnancy and were the reason why I had to have an elective section.
I’m on a huge amount of painkillers (you can see some Fentanyl patches on my arm in the above photo) and I would really like to reduce these….
I’m really hoping that the weightloss I’m expecting will boost my confidence and that not carrying so much around with me will help my bones.
I’m praying that the my energy will surge and I don’t want to even think about the possibility that the pain might reduce….
I’ve been inspired to do this by Martine McCutcheon (a UK tv star and singer who has battled for some years and faced bankruptcy due to her inability to work. She is rebuilding her life and has publicly said that the juicing program has helped her) after reading about her battle with ME and Chronic Fatigue syndrome. I’ve also chosen to follow the same juicing program, initially, Jason Vale’s 7lbs in 7 days and then will go from there. If it worked for her, maybe it will work for me? Please??! 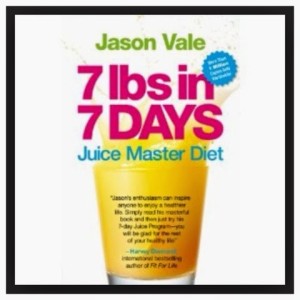 And so, to start.
I’ve been shopping for over a week to get everything that I need. It’s certainly not the cheapest ‘diet’ and if I was only doing this for quick weight loss, I’m not so sure that I could afford to. But…this isn’t going to be a fad! I am going to stick to this. I’d better do.
My kitchen has been blinged with a new blender and a juicer- both of which I’m too scared to use! Taking them apart to wash them required a phd.
Supplements! Along with a houseful of food, you need supplements. I’ve also bought some that weren’t on the list but these are for after the first 7 days.
Bee Pollen. It looks like little bits of honeycomb but is supposed to be amazing:
Chia seeds that will no doubt get stuck on your teeth, but claim to give you energy and fill you for longer….like the sound of that! :
Raw chocolate nibs. No reason required. I’m going healthy but I still need the taste.
Flax seed oil- it was an ingredient in a flat belly smoothie that I tried last week as I started to work towards this juicing. I think I’ll also be adding some Aloe Vera juice at some point as well. Again, it’s got a good reputation for helping with the pain of fibromyalgia.
These are the supplements you need for the 7lb in 7days and can be bought in Holland and Barrett or the internet. I think I found Jason Vales own ‘Power Green’ capsules on Amazon. 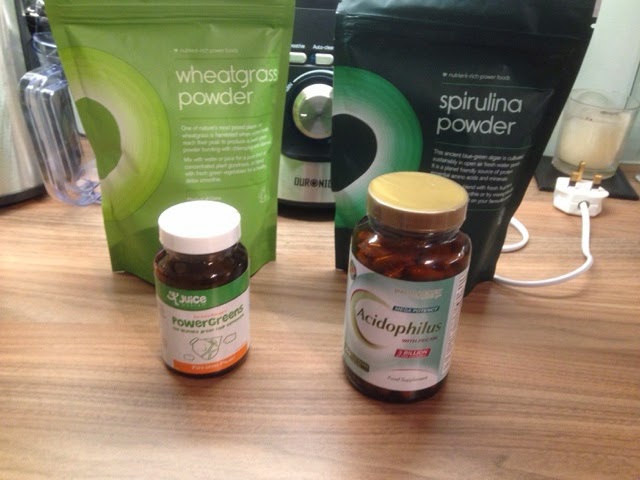 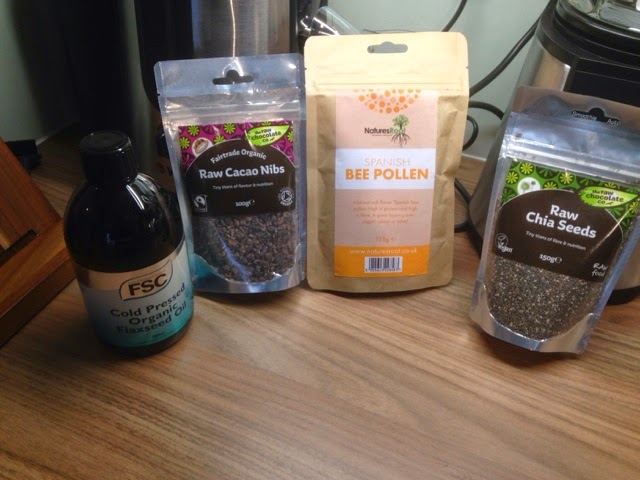 As you’d expect, you need the fruit and veg. Jason very cleverly gives you the shopping list for the first 3 days and then days 4-7 after. I thought it was so that you’d have the freshest possible ingredients and whilst I think that’s still true, I think that the other reason is that if you’re not a celebrity with a massive kitchen and huge double door fridge, you’ll struggle just to fit the first three says on your house! 34 apples is one ‘ingredient’. Can you envisage that? It’s one heck of a fruit mountain on its own. Then add three pineapples and all the veg and you’ve got yourself enough to take the place of a market trader having a day off. 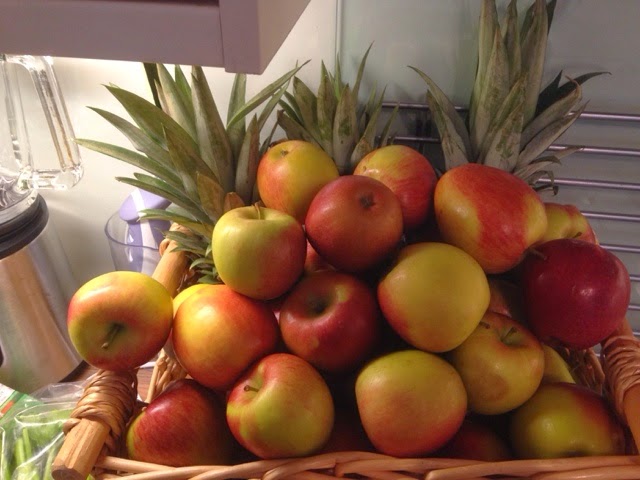 and a better look at what I’ve got 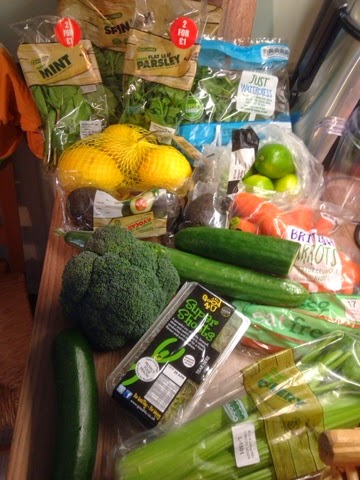 Can I remind you that what you see in the three photos is for 3 days. Not the full 7 days, but 3 days!! My local Lidl was a life saver for most of the above but I did need one or two things from Tesco. Neither, very disappointingly as there are no other supermarkets for about 10 miles, had fresh beetroot or any form of Kale. Two ingredients that were needed.
I should say that I live in semi rural North Yorkshire. You’ll no doubt be able to find them if you live any where larger than a small market town!
So I’m all set. Wine has been consumed, last supper eaten (followed by two small carrot cake cup cakes!) and the last thing to do is to measure, take photos and check which concoction my day will start with (an hour after my coffee replacement of hot water with lemon- how will I cope??).
Measurements. Eeeeek. Fatty bum bum is my new name.
I’m 5″9 inches tall.
Can I leave it at that?
Biceps: both left and right = 35cm
Chest: 38″ under
42.5″ across the ahem..fullest part.
Stomach: 42″ (not my waist that is slimmest and has nothing to do with the size of trouser I wear)
Hips: 42″
Thighs: 63cm both left and right. Thankfully symmetrical (small mercies).
I’ll start tomorrow’s post with my weight. No way am I fighting against end of the day bloat with all the pills I’m on!

*hides under the duvet shedding just a small tear.
Thanks for reading and please leave a comment.