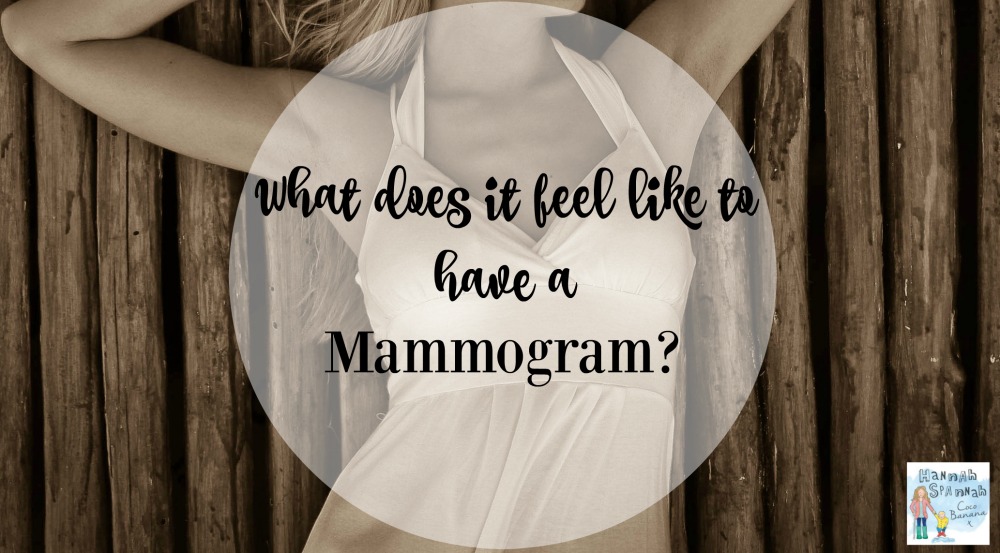 What does it feel like to have a mammogram?

You may also find yourself with a Mammogram appointment before you reach the routine screening age, if like me, you find a lump or have other symptoms that should be investigated.

I recently had pain, noticed a clear substance coming from and found a lump in my right breast and at 37, had my first Mammogram. I am so thankful to report that I have been given the all clear with regards to cancer. I will be having further hormone tests but the worst scenarios are behind me.

I thought I was quite informed and that I knew what to expect when having a Mammogram but it wasn’t quite what I thought. If you have stumbled across this post as you are having one soon, try not to worry. It isn’t that bad, just different.

I thought that it was a bit like a chest X-ray. That you stood, with the top half of your body naked, facing a machine that you rested your boobs onto, they pressed a button and hey presto, job done.

An actual Mammogram is similar to what I had thought but not quite the same.

I arrived at my appointment and waited to be called. I was taken into a room and asked to undress the top half of my body, cover myself with a sheet and wait for the consultant. All the professionals that I saw were women but I’m not sure if that is always the case.

The consultant came in, asked me questions to confirm why I had been referred to see her and she asked to examine me. She didn’t say anything about what she had felt but from what I had said, she told me that she thought it was probably something else but that I had just tipped the scales into an age bracket that meant I should have a Mammogram and that she would like me to have a ultrasound also.

I was then given a snazzy gown / top / robe that closed with lots of sturdy poppers and even had a drawstring to accentuate my waist – it was nice that they had made the effort! My hospital then has a brilliant way of letting you carry your belongings and clothes around with you – old shopping baskets. 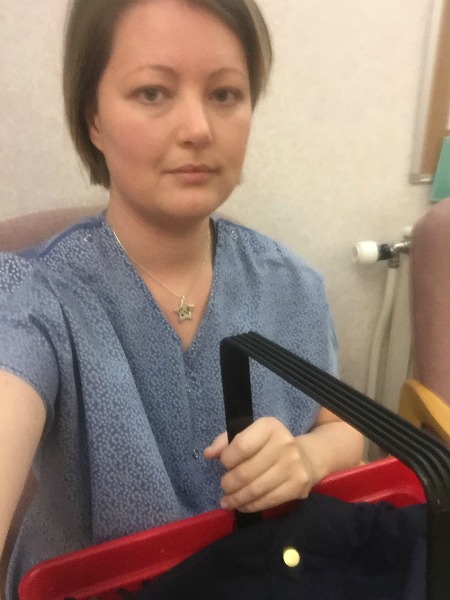 I returned to the waiting room, with ‘my girls’ unsupported and free under my gown that was (thankfully) made of thick material and noticed that I wasn’t alone, we were all wearing the same. Some under coats or cardigans or some like me, just wore the top. There were husbands and indeed male patients waiting to be seen (Men can get breast cancer in case you weren’t aware) and so you might want to take a cardigan to wear on top if you are worried but I felt well covered.

Oh, now obviously it will vary, but it can be a 4 hour process, or at least that’s what my letter said. It was only 3hrs or so for me but take a good book. I didn’t and of course, there was hardly any internet reception and Hello magazine’s got a bit boring after the first 6 issues. Yawn. We actually ended up chatting to each other. It was a specific clinic so you kind of knew why everyone was there and that they had probably had the same midnight worries as you and so I felt as though I had something in common with the other women and we chatted about our kids and what we were going to do at the weekend. It passed the time.

When I was called for the Mammogram, I was escorted to a room, by one female Radiologist and there was another already there.

I confirmed which breast the lump was in and it was explained that they would be scanning both breasts.

The machine is an upright machine. A rectangle pillar with a large, wide, ring on the front. Attached to that was an adjustable arm of sorts that had a two trays – one black and one clear.

I took my gown off and stood up to the machine. The black tray is where you rest your breast. The Radiologist that was positioning me, did so. She positioned my boob onto the tray, made adjustments and then lowered the clear tray down. It is uncomfortable and could be painful but don’t worry, if it is, it doesn’t last long.
In order to check all the breast tissue and find the smallest of lumps, they have to make your breast flatter. So think of a soft foam ball and imagine squashing it flat from above. That’s kind of what they have to do to you boobs. Marvellous!

The Radiologist retreated behind her clear screen and pressed the button to scan. 10 seconds or so later, it was released and the first of 4 images was done. For the next one, the arm and trays were rotated to almost vertical, sort of ten past two position on a clock. My boob was positioned onto the black tray and the clear one was lowered again. This had to be tighter and was the only image that was a little painful. Imagine holding a ball in your hands and squashing it from either side and thats similar to the shape that your boob will end up!

The process was repeated on the other side and it was over. I put my gown back on and went back to the waiting room.

That’s it. That’s what a Mammogram is like. Your boobs will be seen by one or two people (3 in my case) they will be touched and manoeuvred into position and squashed but it’s better than having undiagnosed cancer in my opinion.

The rest of my appointment was spent sitting, waiting and reading Hello!. I was taken for an ultrasound which was the same as any other – the Sonographer asked me where the lump was, applied gel and pressed the wand onto my boob. She didn’t look at every inch of my breast but she did perform a thorough examination and checked the nipple as well.

Back to the waiting room I went and then I met with the consultant who had examined me when I first arrived.

I was incredibly lucky and was told immediately that they couldn’t see anything other than normal tissue on the Mammogram and ultrasound. I need to have some blood tests to determine why I have been experiencing the symptoms that I have but there is no tumour.

If you sadly go through this process and are given different results then I am so sorry that you are facing a fight but fight hard, stay strong and look after yourself.

If you are nervous about going for a Mammogram then try not to be. It’s not that bad. It’s uncomfortable and can be a little bit painful but it lasts seconds. You might feel uncomfortable being examined, manoeuvred or baring yourself but they see so many pairs of boobs everyday. They are not going to remember anything about yours unless you have a funky tattoo and even then, they’ll not remember the colour of your nipple or the size of your boobs.