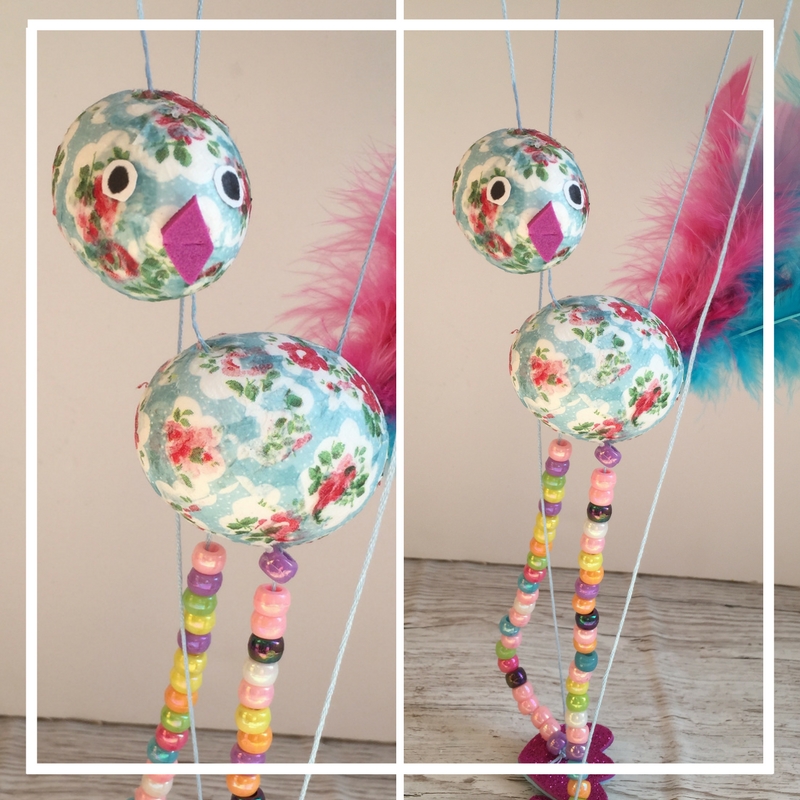 When Bostik send this month’s craft box with a theme of birds/flying, I wasn’t initially sure what to make but then Bear gave me the inspiration by talking about a puppet he had seen that had a “cross you hold to move it”. I deciphered that he was talking about a Marionette Puppet and that gave me the idea. 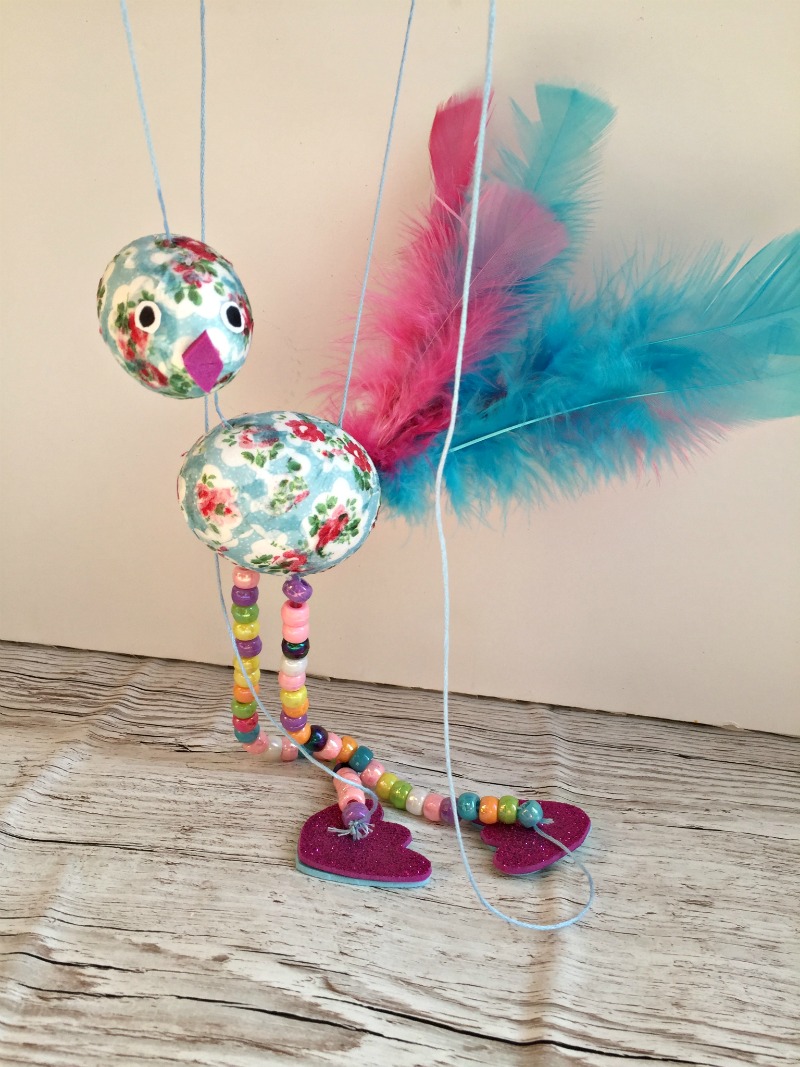 We both love the way s/he came out (we can’t decide) and had lots of fun making it. There are a few stages and so there is a video you can watch and the full write up below.

Heres what you will need although feel free to change it up, anyway that suits you! 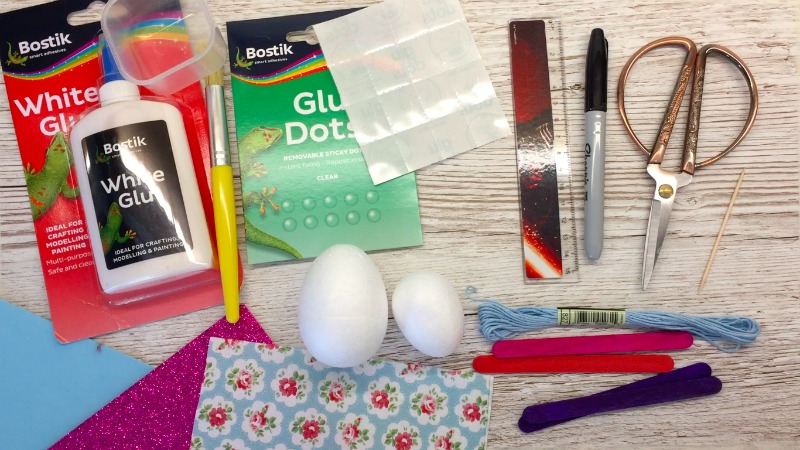 To start, tear or cut the tissue paper into small pieces. Spread White Glu onto one of the craft sphere’s or eggs and stick the paper on. Continue until they are both covered. 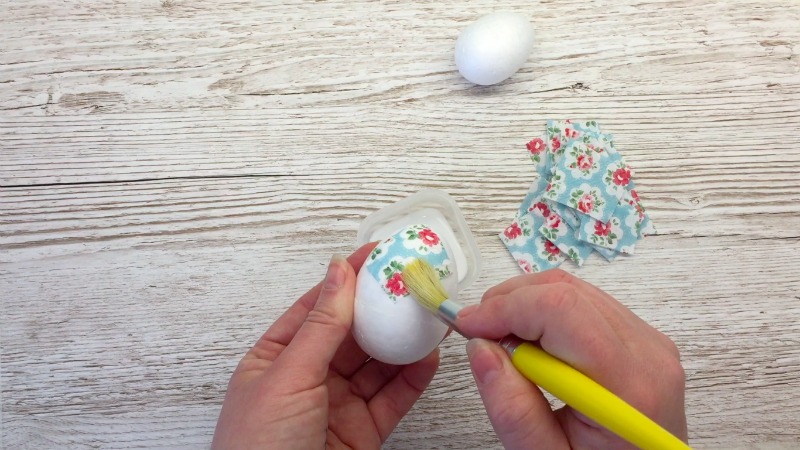 Put aside to dry and move on to making the birds feet. I used two different colours of craft foam – one of which was glitter. I drew the shape of the foot, twice, on the back of the glitter piece. 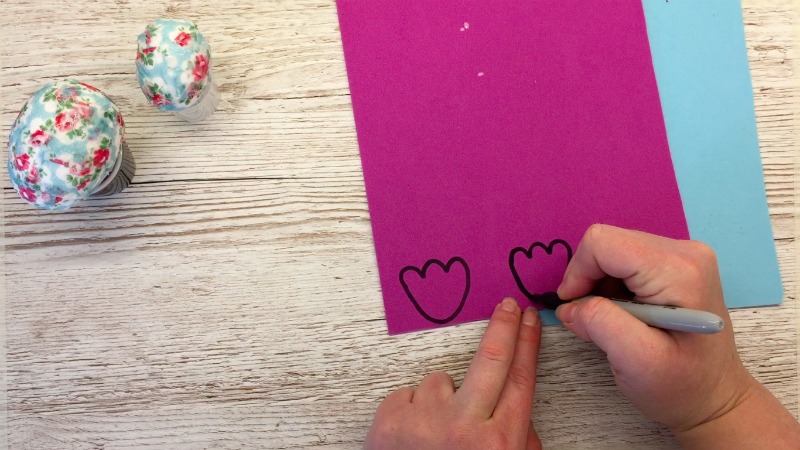 I then put that foot on top of the second piece of craft foam and cut them out, making four feet, two pairs exactly the same size. 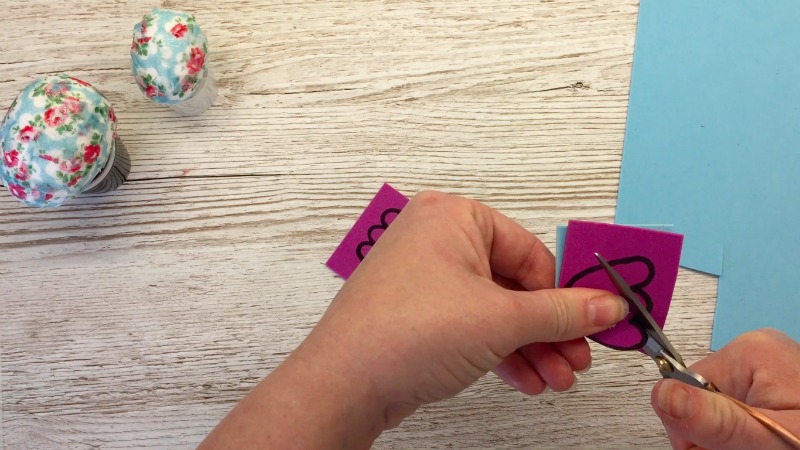 When they were cut out, I cut two lengths of embroidery thread, about 20cm long. You want them to be longer than you need so that you can trim them. 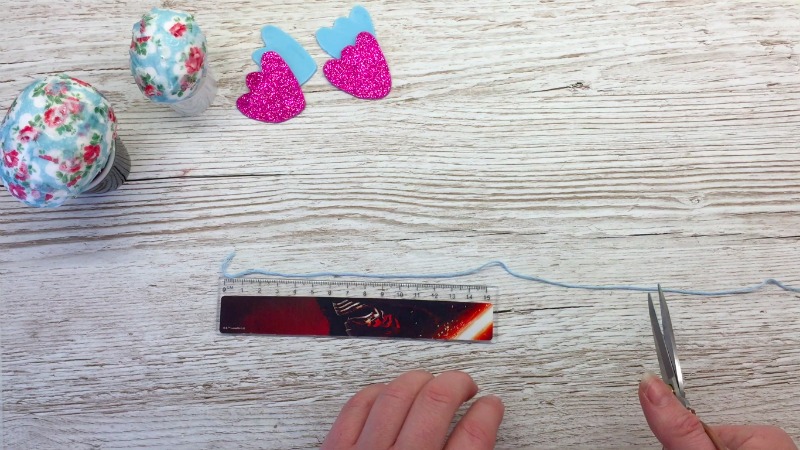 Then, I used a cocktail stick to make a hole in the middle, just through the top feet. 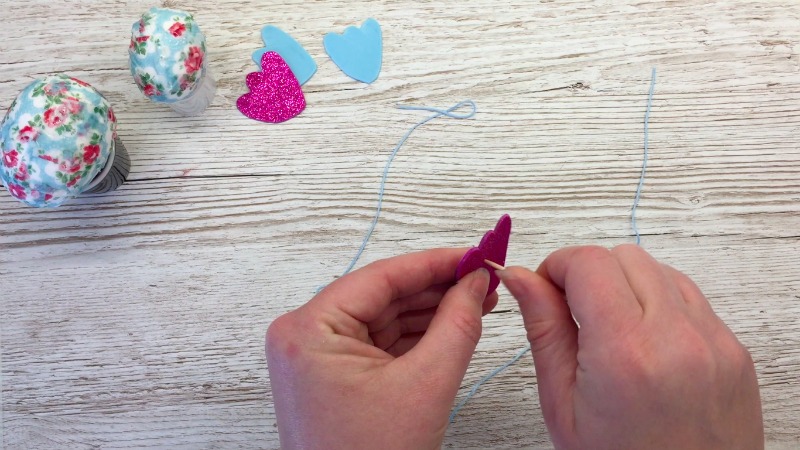 Then, again using the cocktail stick, I poked one end of the thread through the hole. 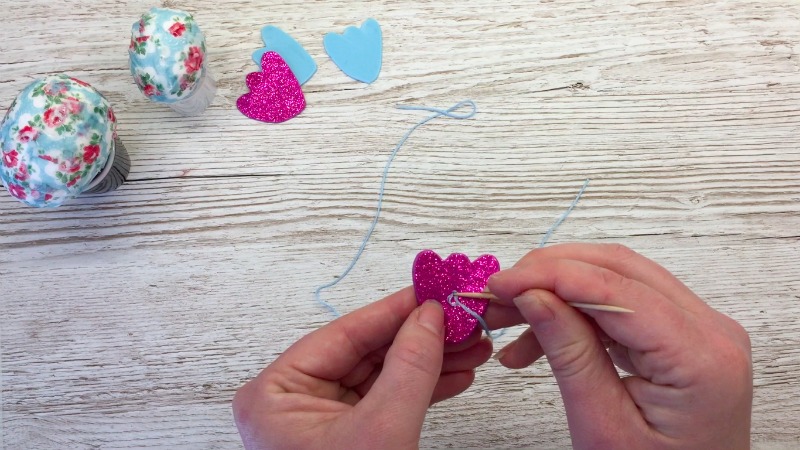 Now you need the Bostik Glu Dots. Stick one on top of the thread – this secures the thread in place and also will stick the bottom foot on. 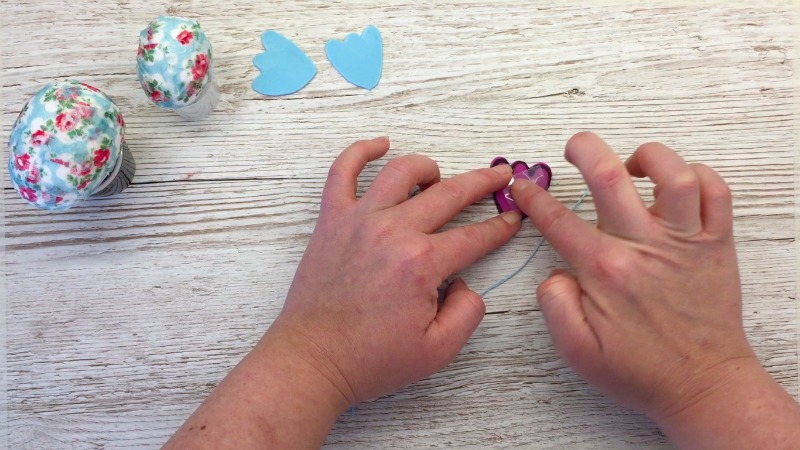 I used about 4 Glu Dots per foot to make sure that it wouldn’t peel apart at the edges and then stuck the bottom foot on both. 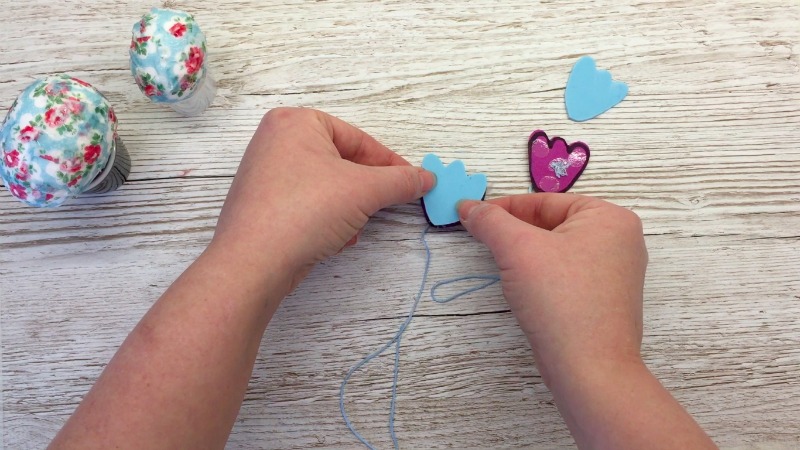 Up until this point, Bear hadn’t been all that interested as the sunny garden and the lure of his new climbing frame had won over crafting, but now, he decided that he would thread all the beads onto each leg. To help him, I wrapped a little bit of sticky tape on to the end of the thread so that it would be easier to put the beads on. We just ‘eyeballed’ the amount of beads but ket checking to see what looked good and in proportion. 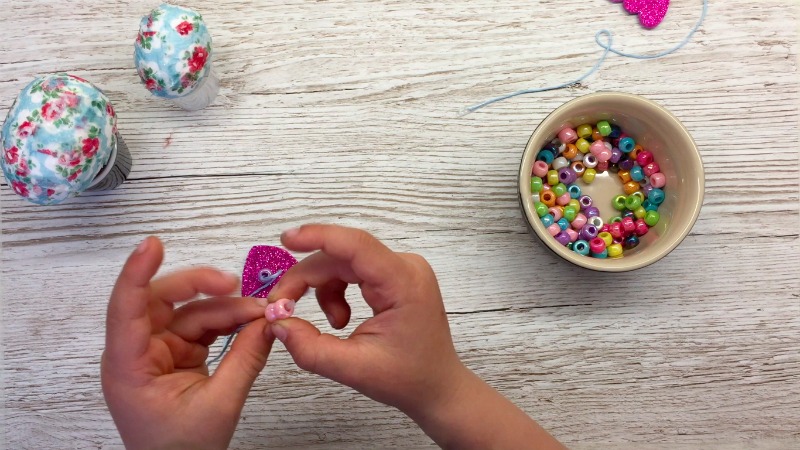 When both legs were threaded with beads, I trimmed the ends until there was about an inch spare above the last bead. To attach the legs, I poked a hole into the body in the body with the cocktail stick. 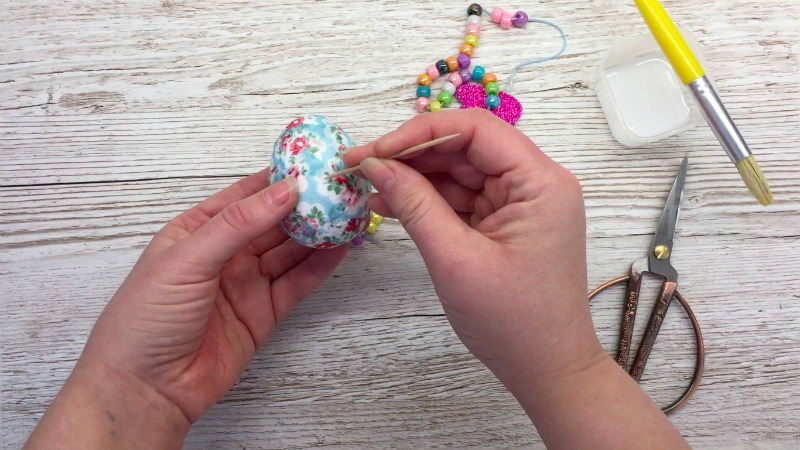 Then, I put a spot of glue over the hole and just like with the feet, used the cocktail stick to poke the thread into the body. When I had pushed most of the inch of thread in, I put another blob of glue on top to secure it. 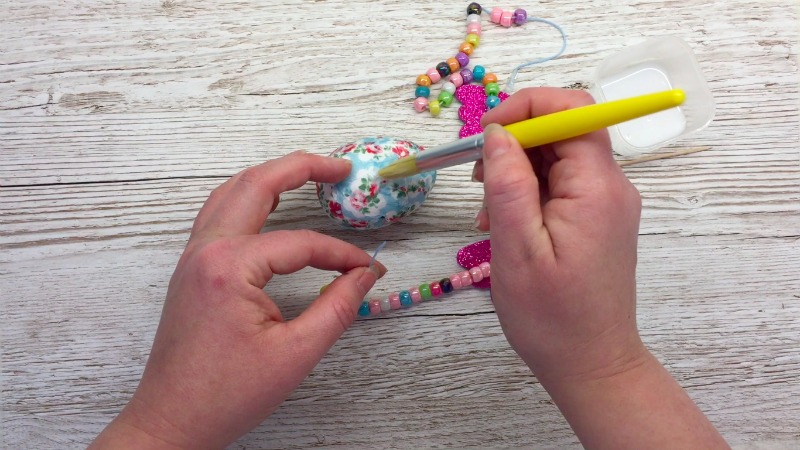 I attached the head in the same way and the ‘neck’ ended up being just under an inch long. 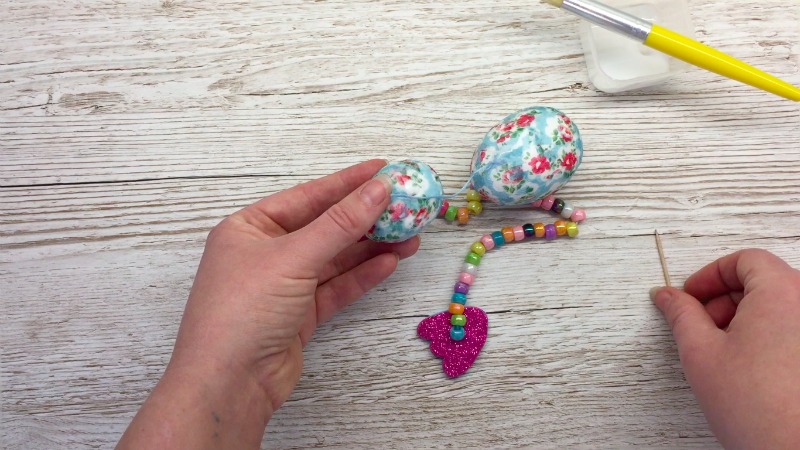 I put the bird aside to dry and now it was time to make the crossbar. First, cut 4 lengths of embroidery thread (or fishing line if you have it but I didn’t so thread it was). I would make them about 20-25cm long, again, so that you have some spare.

Take your 4 lollypop sticks and put a Bostik Glu Dot on each end of one. Then stick one of your 4 threads on each dot. 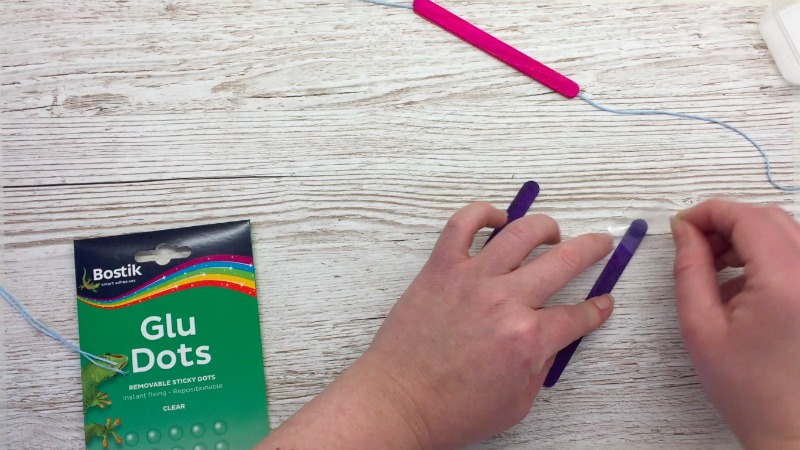 Now take some of the White Glu from before and spread it in between the glu dots. Finally, put another lollypop stick on top. Repeat this with the other two lolly sticks and threads. 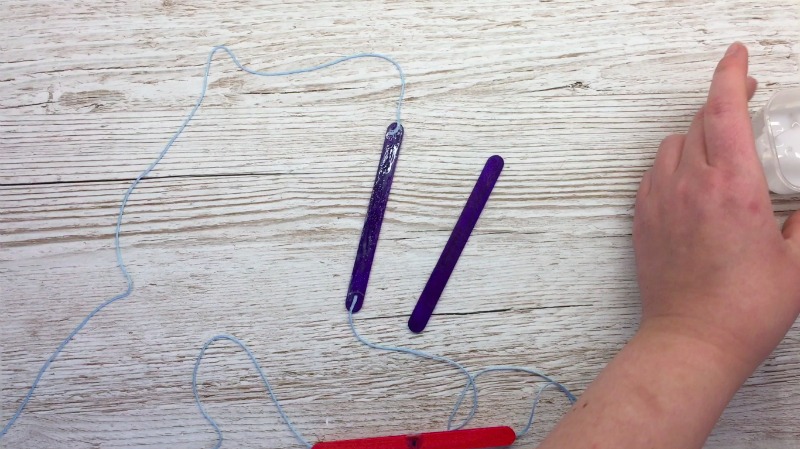 I then found the centre of each lolly stick and put a small dot of black pen to mark it. 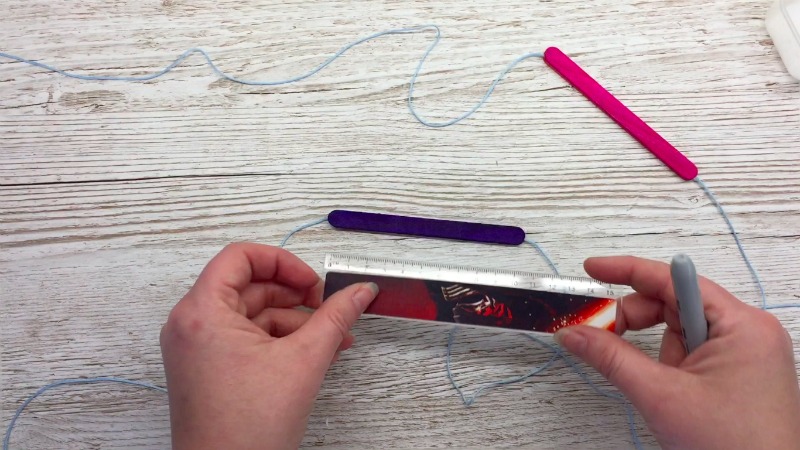 I then used a glu dot to stick them together in a cross shape. 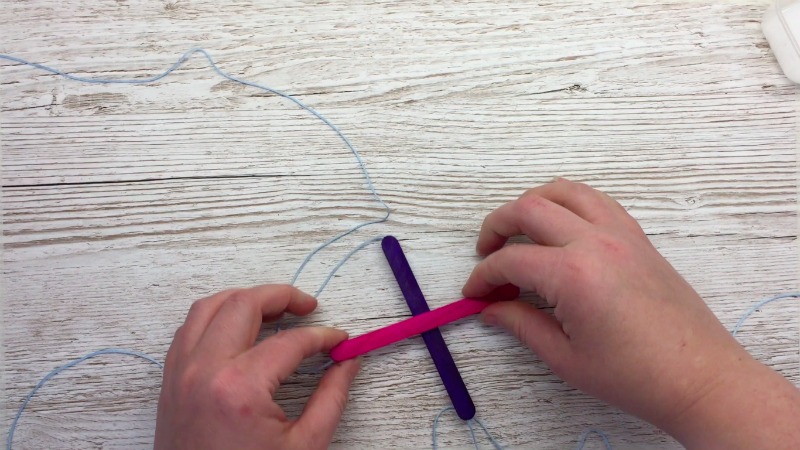 Now it’s time to join it all together. Take two threads that are stuck to the same lollypop stick and tie them to the ankles of the bird. It’s a bit of trial and error here as you need the threads that lead from the cross bar to be the same length on either side. Too short and the feet won’t sit flat. 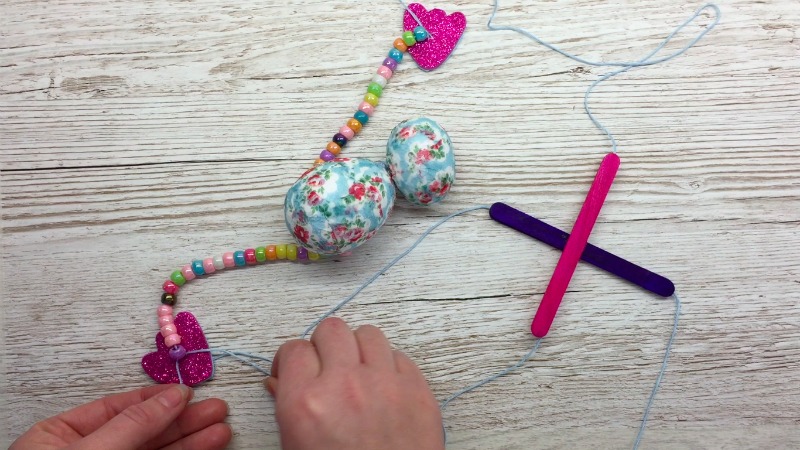 Next, you need to shorten the thread that will attach to the body. Poke a hole and add glu as you have before and begin to poke the thread in. Keep checking that that when the legs stand straight, the body is in the right position and not too low or high. Then do the same to the head so that it is higher than the body. 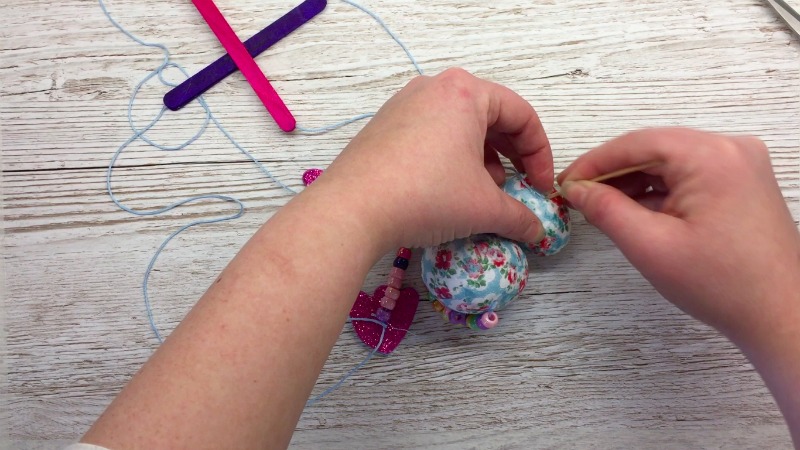 Almost done! Add some eyes (I cut two tiny circles of scrap paper and drew a black dot) then stuck them on with White Glu and cut a diamond of craft foam or card, fold it in half and stick it on as the beak. 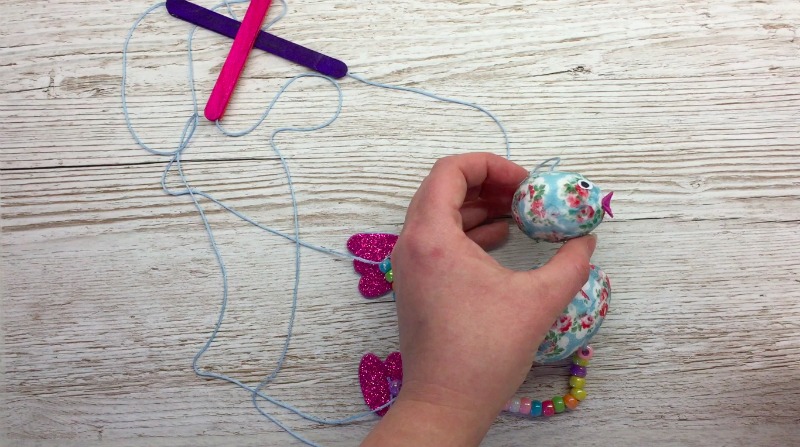 If your joints are all still a bit wet and you have an impatient child, a hair dryer on low heat really helps to speed the drying process up. 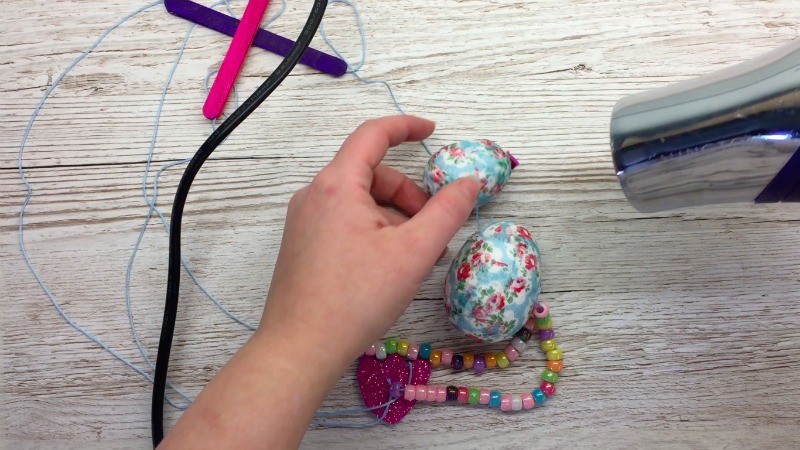 Last bit, I promise. If you have a little bit of wire, such as jewellery or florist wire, wind it around your feathers. 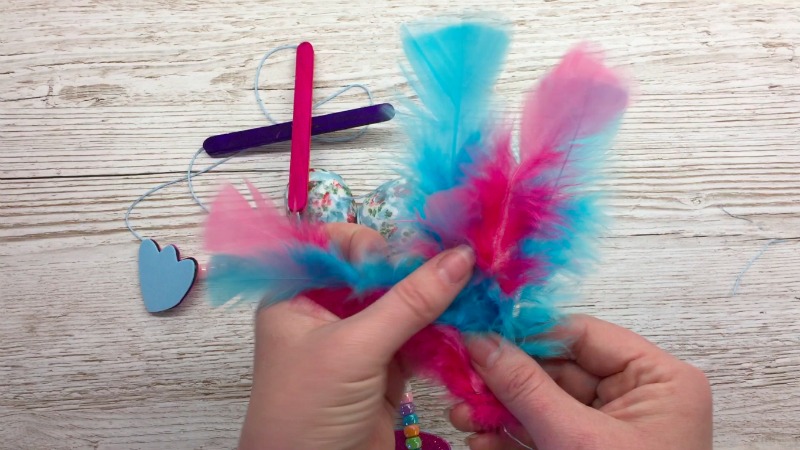 If not, you can stick them on but if you do have wire, poke a hole in the bottom and then push the wire in. 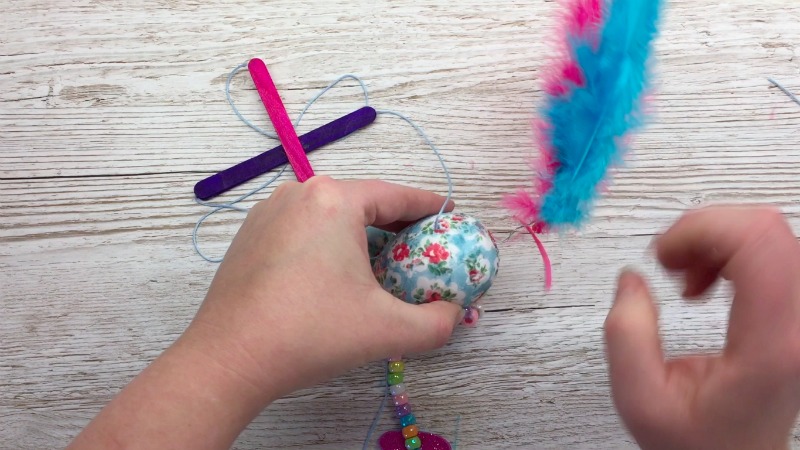 Tadaa!! You now have a Bird Marionette Puppet. 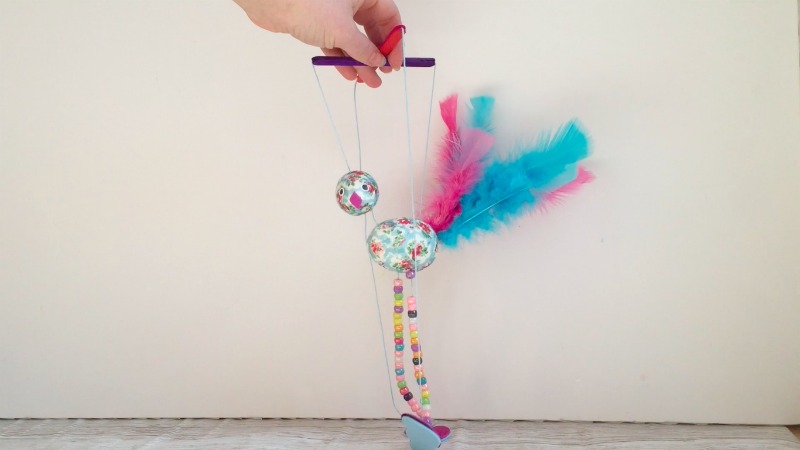 Have fun. I hope you all enjoy making this and then playing with it. You can apply the technique to so many different animals and people, depending on the shape of your polystyrene spheres. 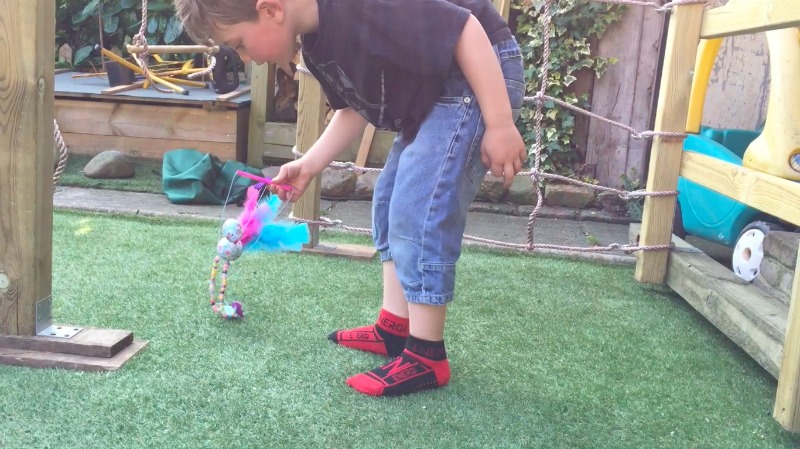 Thanks for reading. If you made it this far, leave me a comment saying ‘I made it’.

Pin this for later 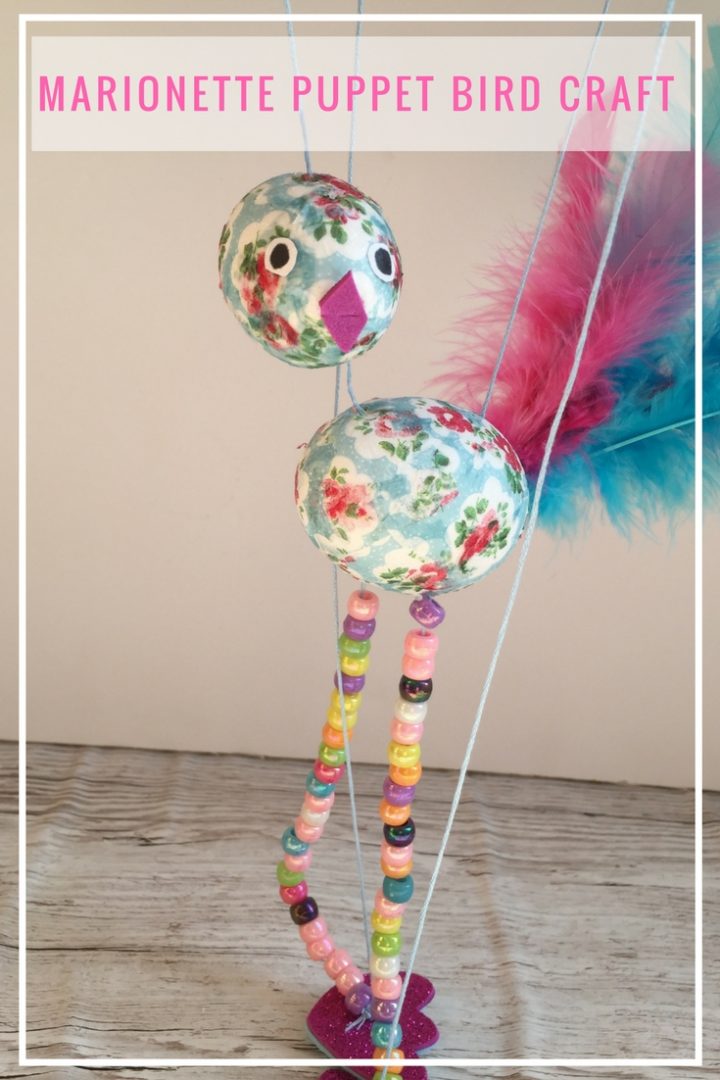