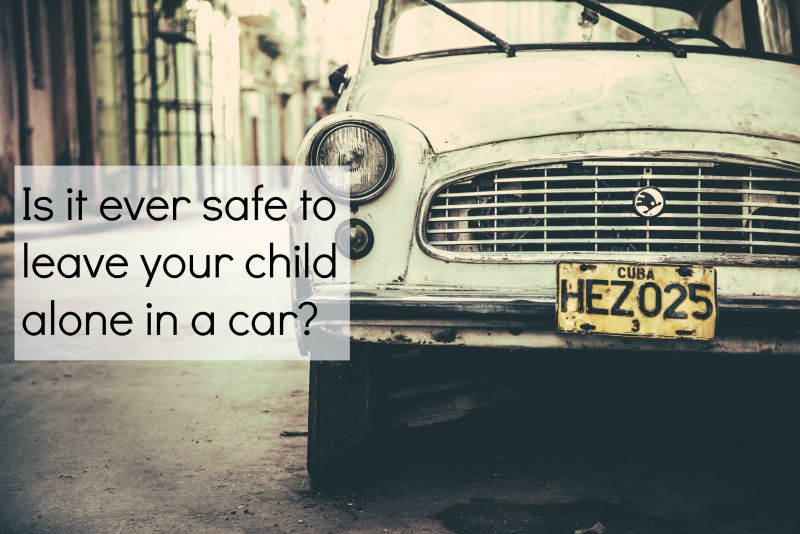 Is it safe to leave your child alone in a car?

So, last week, an ex pop star left her two children aged 4 yrs and 18 months, alone, unattended and locked in her car for 10 minutes. The four year old was unrestrained and sat in the front street and the younger daughter was strapped into her car seat whilst Mum ran some errands and was in and out of shops, unable to keep her girls in her line of sight.

This has opened a huge debate. Super Nanny has even waded in and although not condoning the actions of Rachel Stevens, the mother in question, but more the way that we ‘bash’ celebrity mothers.

I agree that it must be horrible for her, facing such a backlash and questioning of her parenting, in the papers for days and debates up and down the country, but I wonder, why would someone in the public eye take the risk?

There are so many reasons why you’d think that they wouldn’t.

Lets ignore the basic safety issues (for now) that we face as mere non celebrity mothers in this situation, but as a celeb, she’s likely to attract attention. Be it paparazzi (that stood and took photo’s of the children) fans or weirdo’s. So, knowing this, you’d imagine that she’d maybe think ‘I won’t leave them as I could be photographed doing so and it won’t look good’ or maybe ‘If fans see me, it’ll take me longer to shop, I’ll be away from the girls longer and what if they hang around the car and take photos of the kids and upset them?’ or finally, ‘what if a weirdo is watching me and upsets the girls or worse?’

I just don’t get it. I know I am lucky – I have a pay at the pump petrol station near me and so I don’t need to leave my son unattended whilst I pay but I used to be a nanny for 3 children under 5 and pay at the pump didn’t exist in those days. They all had to come into the petrol station with me and of course made the job 20 times harder but that, in my opinion, is what you sign up for when you have children. My sister can whizz through her high street shopping, in and out of shops and the same trip could take me 3 times as long but that’s my life. I chose to have a child, my sister has chosen not to.

What is a safe age then? I think you need to obviously take your childs personality and how much you trust their instincts into account but I think I wouldn’t leave my child alone in the car until I’ll leave him alone in the house and that would be at secondary school age – 11yrs old.

The majority of cars don’t have cigarette lighters anymore but in my childhood, myself, my sister  and our neighbours girls approximately me at 5yrs, sister at 10yrs, neighbours 12yrs and 13yrs, were left in the neighbours car after church. I remember that we kept on heating up the lighter and watching the red glow. The end result was a circle burnt into the leather steering wheel. Oooops. I do think as an adult though, what if it had been the upholstery or a blanket or clothes. Yikes.

Most cars, even when locked, have a switch that can override the door locks or even just pulling the door handle lever can unlock the doors. I’m pretty sure that my son could do this if he wanted to. That would be that. He’d be out of there and half way down the street.

I’m not even going to start with the temperature debate. On this occasion, it was an overcast, cool winters day but we have all heard the horrifying stories of children being left in a hot car for too long. A cold car can also be very harmful. Most of know what it feels like when you park up for a minute and switch the engine off. The heat rises or cools very quickly so that does need to be taken into consideration.

My story for you. This is true and is not exaggerated for the sake of this article.

As a nanny, the family and I were preparing to go on holiday. The two children were about 1yr and 3yrs. The car was packed, the last minute checks were being made and I was making some sandwiches and a picnic for the journey. The kids were excited and into everything and getting under our feet.

Dad and I put the kids in the car that was on their private gated driveway. We strapped them into their seats as we were literally 5 minutes away from leaving. We went to finish the jobs in the house.

The next thing we knew, the eldest came running into the house, upset. ‘the car. moving.’ or something along those lines.

It took a millisecond to register. We all ran out and down the drive way.

Basically, the eldest must have somehow knocked the handbrake off. The car began to roll backwards and the eldest jumped out of the moving car and ran to tell us. That is one tragedy escaped. They could have been run over or fallen and hurt themselves.

The car (a 4×4) had rolled down the relatively gentle hill, smashed through the wooden gates and had come to a stop, on the road, horizontally, blocking the entire road, on a blind corner with a 60mph speed limit. Someone must have been looking out for the family that day.

We all got to the car, one of us grabbed the baby and the Dad who had the keys on him, quickly jumped in and drove the car back onto the drive.

No one could have ever predicted that this would happen. They were so, so lucky.

Some people will have left their kids in the past and thought ‘oh come on, nothing would have happened to the kids’ but it did. This is a true story. These things do happen and the outcome will not always be as remarkable as what I witnessed.

We all have those days when we are exhausted, or our children are grumpy, sleeping, naughty or the rain is falling like a monsoon but we need to really weigh up the risks. Even when we think we’ve got it covered, there are outside influences. Would your child stay in the car in all situations? I wouldn’t trust my son. He’s still in a 5 point harness but he can unbuckle himself if he really tries. If he wanted me for some reason, I think he’d be out of that car and would come looking. But would he find me or would someone find him?

How many times are cars bumped by others in a car park? Even if it weren’t a high speed collision, and your child were not hurt, they most likely would be scared.

So there we go. I don’t want to preach but I did want to share my story as we do things that we think are harmless, safe in the thought that the worst will never happen to you, but it did happen to me and the outcome could have been horrific.

Do you leave your child in the car? At what age do you think it is safe?