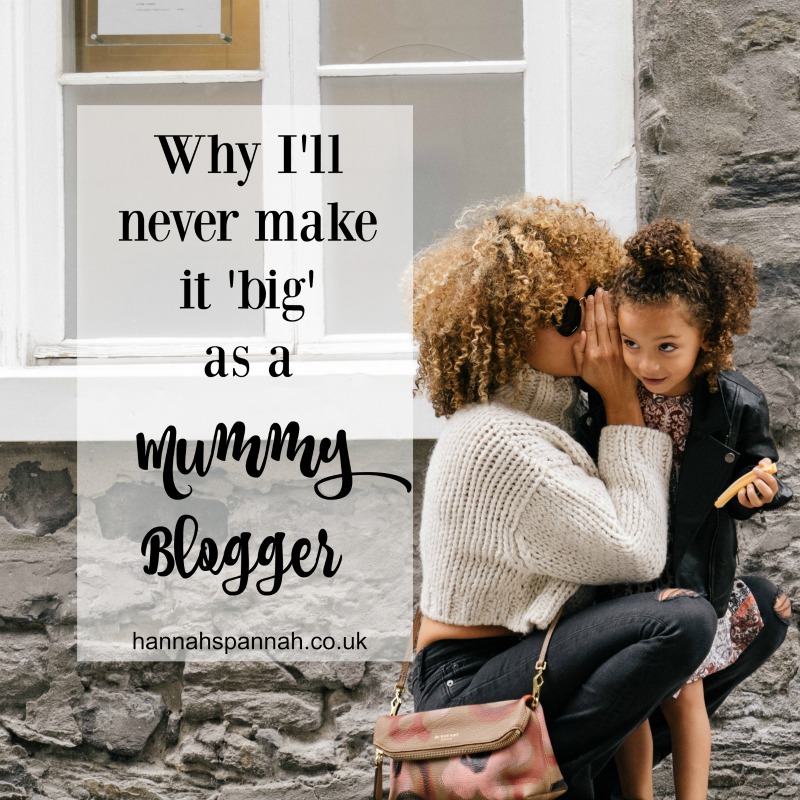 I’ve been thinking about this for some time. It’s hard to put the words together and make them sound ok and that I’m not some smug angelic t*@t mother wanna be. This is why I’ll never make it ‘big’ as a Mummy blogger

Lots of people start blogging for lots of reasons. I initially started blogging whilst in the depths of very severe post natal depression and new physical health problems and investigations. Writing helped me cope. I also began to write about my son so that I could document and remember all the things that we did – I wanted a record to show him that we did do lots of things, if my health kept me bed bound, just in case he ever thought I was a rubbish Mum that never went anywhere with him.

Thankfully, my health, with treatment, has improved to the point that I can live semi independently now that he has started school, but I still continue to blog.

Other people, who’s blogs I love, such as the insanely funny ‘Hurrah for Gin’, the ‘Unmumsy Mummy’ and many more, hilarious tell the tales of motherhood. I can’t compare myself to them. They have been doing this for a lot longer and are very good at what they do. I’m not in the same league as them but even if I was, my posts wouldn’t get shared as much as theirs. I wouldn’t be getting the hundreds of thousands of likes and shares and reader numbers. I never will.

I’m ok with that. I accept that and I think they are so well deserving of their success. However. What I hate….what really pee’ s me off, is the general consensus that if you write about the good times, if you enjoy parenting, if you manage to keep yourself fit and care about your appearance, if you don’t moan about being a parent….. you are ‘smug’ and looking down on other mum’s by supposedly showing a small 5% of your life in carefully curated pictures and blog posts and that you think you are better than other Mum’s if you offer ideas to help others.

A ‘journalist’ (can you call her that?) wrote a piece for a newspaper where she praised ‘slummy mummy’ bloggers who write about ‘hilariously honest musings’ and the ‘messy realities of motherhood’ – insinuating that those who don’t, are lying, making it up and not being real. Questioning those of us who craft with our children or think up ways to make childhood as fun and magical as possible with – “Do those women really have nothing better to do?” It depends what you class as better. Your better may be different to my better but both can be argued as the best, it just depends on who you are.

I am not a perfect Mother. I am overweight. My house is small, dark and cluttered. I have money worries and I have moments when I lose my temper. But. All I have ever wanted to be, in my life, is a Mother. I’m sorry! That doesn’t make me think I’m a better Mum or woman for that matter.
I know other people have felt the same and then got the shock of their lives when the child has arrived and I’m not saying that even if it’s all you’ve ever wanted, if you’ve lived through loss and devastation before your miracle arrived, that you can’t moan about parts of being a Mum, but what I am saying, is that I can’t moan about it and I know lots of people who are the same.

I might moan to my Mum or my friend about the early wake ups but I know that it’s just a part of life as a parent, that kids don’t just decide to not sleep and set some internal alarm clock, just to terrorise us. I understand it, expected it and prepared myself for it. I actually prepared for much worse than what I have got (although he did sleep upright, in my arms for pretty much the first 2 years of his life due to underlying health conditions so was no perfect sleeper). I can’t write a funny post about hating being woken up or hilariously pondering when he’ll finally sleep though the night as because I just accept it, its just life to me and I don’t hate being woken up.

This doesn’t make me some do-gooder Mummy – I have chronic fatigue and take a huge amount of strong pain medication and waking up and getting up is bloody hard – seriously hard, I think I just have so much guilt about being ill that I hate the thought of him thinking I’m not there for him.

I worry so much about nutrition that I can’t write a funny post about just giving a tea of nuggets, smiley faces and ketchup and how that’s the way it is because it’s Friday. I wish I could but it makes me anxious. That’s not my fault but I don’t think I’m better than you because I have to ensure balanced nutrition for my own anxieties. There are the odd crappy meals when I’ve been ill or we been on the motorway but I could never write it off as ok and would have to plan the next few days to make up for it. He does eat pizza like a good un and cakes etc by the way!

I can’t moan about when he gets ill and how hard it is (and yes, it is bloody hard) because I feel sorry for him. It’s not his fault and he’s suffering more than me. If you write about the trials and tribulations of kids vomiting all over the bedroom and how shit that is, I will laugh, and not think anything other than agreement at how hard it is but I can’t think ‘FML’ because I walked into motherhood with my eyes wide open. I guess I’m quite laid back and relaxed about it.

I’m lucky. I was a nanny and a maternity nurse for 15 years before having my son and there’s nothing I’ve not seen. I used to work 24/6 so experienced the sleep deprivation but I’ve also had the pressure of being well presented, cheery ALL the time, cooking nutritious meals ALL the time, providing stimulating, educational and fun activities ALL the time and ensuring the house was clean and tidy, the washing and ironing done for up to 4 kids, homework done and uniforms laid out for the next day, before my bosses came home from work. Now as a Mum, I don’t have that pressure and being a single Mum means that I have no husband to feed or look after so in some way, being a Mum is easier than being a Nanny!

When my son is the cheekiest boy that I’ve ever met, when he is so defiant that it makes my blood boil, when he walks mud all over the fresh cleaned rug or has no idea what’s wrong with flooding the bathroom, I discipline him. I can lose my temper, I can need to walk outside and count to 10 because I’m worried I could explode, I can feel as though I can’t cope but thanks to my experience, training and knowledge (I used to teach childcare and development at level 3), I know that these things are normal. I know that it’s a phase, its almost a right of passage that they all go through and that it’s almost to be expected, I can understand it and can’t be fed up or annoyed about it because I knew it was coming before he was born.

That doesn’t make me smug. I don’t think I’m better than anyone else. I think I’m lucky. I think its easier for me in some ways. As a mother, I read so much and research development, behaviour, the ways different countries approach childhood, discipline, freedom, education etc. I enjoy it. It interests me. I’m not boring, I’m not parading as having this parenting malarky down. Believe me, I have not but I can’t help that I love it more than anything else.

So many parents and parenting bloggers are the same. We can’t help but feel blessed. We can’t help that it makes us feel bad to moan or think about our children in annoyance. I would hope to raise my son with a mega sense of humour and that he would read anything I wrote with a pinch of salt, but I can’t help but feel sadness at the thought that my son would ever read that I was pee’d off because he woke me up to play, or that I was so tired and fed up because he was ill etc.

I do get tired. I do get fed up. I do get cross and I do sometimes feel exasperated with no idea how to deal with a certain pattern of behaviour but I’m not smug. I’m not promoting an unrealistic side of parenting. It’s just different.

On the other hand, I don’t always think that bloggers who complain about certain aspects if life are actually doing that, I just think they are fabulously able to write about the hard times, make them into a a funny story and help other Mum’s not feel crap for doing the same.

A lot of the problem is the media and people’s own self confidence in who they are as people and parents.

Just because I love being a mother, baking, crafting, don’t mind mud or paint, and enjoy playing with my son, does not make me a better mother than a woman who loves her children and her career and works full time. Just because I don’t go out often, deal with a hangover and childcare and have days where I just want to hide from my son, doesn’t mean I am or think I am any better then a mother that has a life away from her kids. Just because I write about how blessed I feel and how much I love being a Mummy, it doesn’t mean that I think Mum’s who don’t express this publicly, fell any different to me. And just because I am raising my son in the way that I think is best, doesn’t mean that I think you’re not doing as good a job if you do it differently. We’re all just doing our best to raise the best little people that we can an equip them for the world.

People are all different. Mum’s come in all shapes and sizes wth different likes and dislikes but just because the media and society have portrayed a certain image as what a Mother should be like, it doesn’t mean that you’re not as good as, if not better if you don’t fit that mould.

It’s just another way to pit women against each other and it’s totally uncalled for.