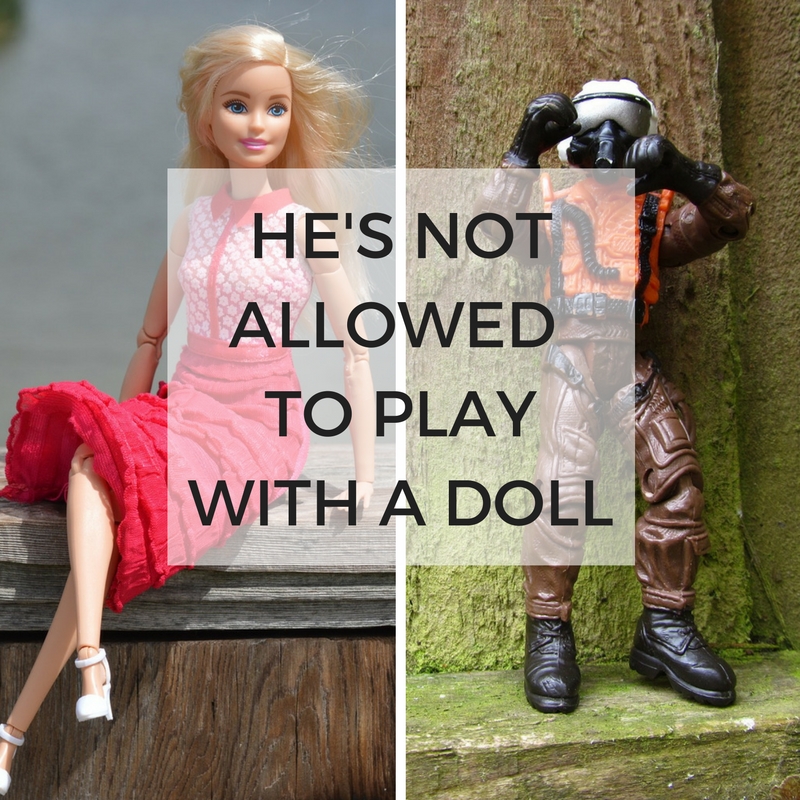 He’s not allowed to play with a doll. The ‘He’ is my son. The voice comes from my ex.

Why on earth do so many people (not always but in so many cases, men) hate the thought of boys doing anything that is supposedly for girls. I hate it.

My son is almost 5 years old. His favourite toys are diggers and dumpers, he loves to wrestle and play fight with our labrador. He is attracted to mud and water like a magnet and thinks that picking his nose and farting is hilarious. He has, from the get go, enjoyed playing with whatever toys are around and I have purposefully never told him that he can’t play with a certain toy, wear a certain colour or have his nails painted etc. When we’ve been at playgroups, he has played with pushchairs and prams. he’s enjoyed pushing the around and there aren’t many indoor alternatives that are ‘made for boys’. Other than the occasional wooden block trolley, or shopping trolley (are they more widely accepted for boys?) there’s not much for them to push around. Those with younger siblings will mostly see their Mum’s pushing pushchairs and they like to emulate adults. Boys are as caring as girls are and why the hell are we not all celebrating this?

In a world where there are celebrity male (and heterosexual) hairdressers, where we all have barbers on our high streets, where there are daily adverts for male grooming products and a man going to a salon is no longer something out of the ordinary, is it not ok for a boy to play at brushing a dolls hair? How many Dad’s can’t do their daughters hair? Why can Mum’s? Because as girls, it’s acceptable for us to practice as kids but why not boys?

Dressing dolls is a fabulous way for kids to increase their fine motor skills and dexterity and also learn life skills. Children need to start school with the ability to dress themselves. Practising on dolls can be easier and less stressful for children but boys are not supposed to have this practice. Why are ‘dolls’ that are targeted at boys always crime fighting, angry, physical characters? 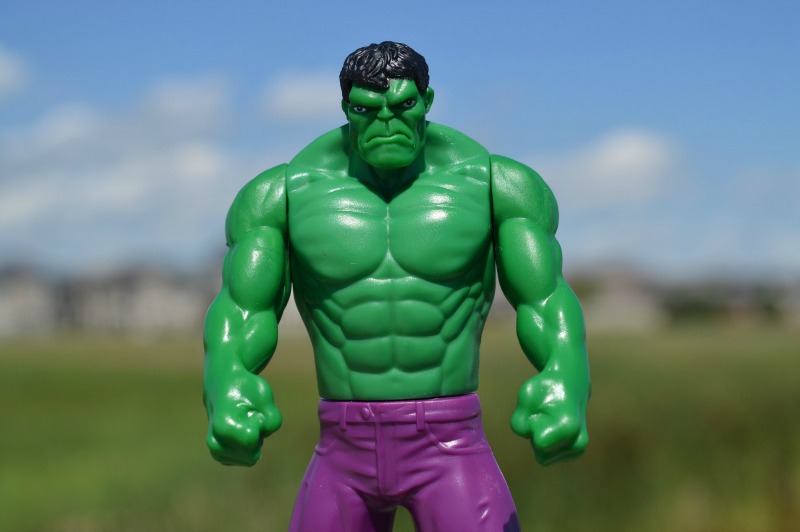 My son loves to have his nails painted. I occasionally do mine and whenever I do, from the beginning, I have painted his if he has wanted me to. As you can imagine, his Dad absolutely hates it. Why? What is wrong with it? My son see’s colour. He see’s individuality. He see’s being able to what Mummy does.

That takes me to colour. There is a whole bloody rainbow out there. Why can boys only express themselves in primary colours and their darker, greyer hues? How may men wear pink shirts or ties? So many. It’s stylish and attractive. Why can’t boys accessorise with a pop of colour? Now that takes me to shoes. Lelly bloomin Kelly. They are some of the most coveted shoes for girls and what is the boy’s alternative? Hardly anything on the high street. I did recently find a brilliant barefoot shoe company that makes bright, fun shoes for boys and they can be personalised with different straps, just like Lelly Kelly but still. When my son was younger, he used to be drawn to those shoes like a magpie. And that’s exactly why. The colour, the sparkles, the glitter, they make the shoes look exciting and boys shoes are so boring. Oh wow, they have a grey dinosaur on the side or a motorbike. How fun. Yes, you can get light up shoes and thank god you can but the kids themselves can hardly see those lights. So, what did I do when my then 3 years old son was fed up that he had to get boring blue trainers? You bet your bottom dollar I sewed a couple of sequins on to the toe for him. I do not care what anyone thinks. You could hardly see them but so what if you could? He loved them. 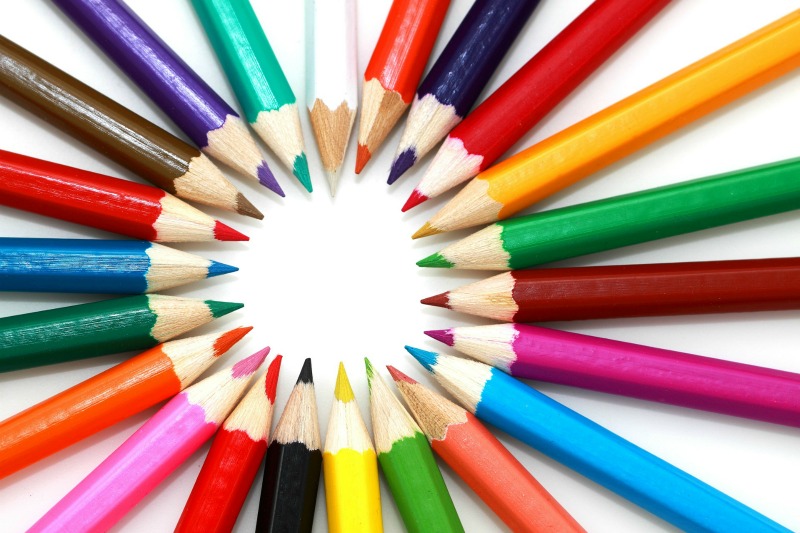 I hate the fact that it’s ok for girls to have short hair but little boys with long hair, past a certain age, can be frowned upon. Girls can wear trousers now when once, they were only for boys. Its equality for all! No it’s not. Boys who dress up in princess dresses are ridiculed and laughed at.

We went Halloween costume shopping a couple of weeks ago. My son isn’t into scary, gory costumes. He instantly gravitated to the witchy, sparkly costumes. I tried to suggest others but those were the only ones he wanted. I knelt down and chatted to him. I said that he could wear whatever he wanted and if he wanted that costume then that was totally ok but that we might come across children that might say ‘that’s girl clothes’. His little face dropped and I instantly wanted to punch myself in the mouth. I tried to reassure him that anyone can wear whatever he wanted but that some boys and girls think that boys can’t wear dresses. I tried to make it silly and funny and that they thought that but he had lost his confidence. I just didn’t want anyone to say something and upset him on the night. Thankfully, I found a Darth Vader costume and as he has heard of Star Wars, he was really excited and felt grown up to have it as I won’t let him watch anything like that.

There has been a bit of a revolution recently, surrounding superheroes. Girls can be superheroes too. This is brilliant and important as strong women and girls need to be represented with toys and up until recently, it was really hard to buy anything other than Wonder Woman but I think the same needs to be available for boys in the opposite vein. Where are the baby wearing Ken dolls, or more of a choice of boy dolls in general? My son found a Barbie doll at our house that we couldn’t find the owner of. He loved it. He liked that it was a toy that he could take in the bath, wash her hair etc. He liked having her around. He likes girls. He’s being raised by a single Mum, his Auntie and Nanna. We are the people he spends the most time with. Thankfully he gets his rough and tumble time with his Dad and my Dad but he has seen that I can do anything a man can do. Flat packed furniture, fuses, car maintenance etc, not a problem. Anyway, I’ve digressed, but as much as he like his friends that are boys, he equally likes his friends that are girls. 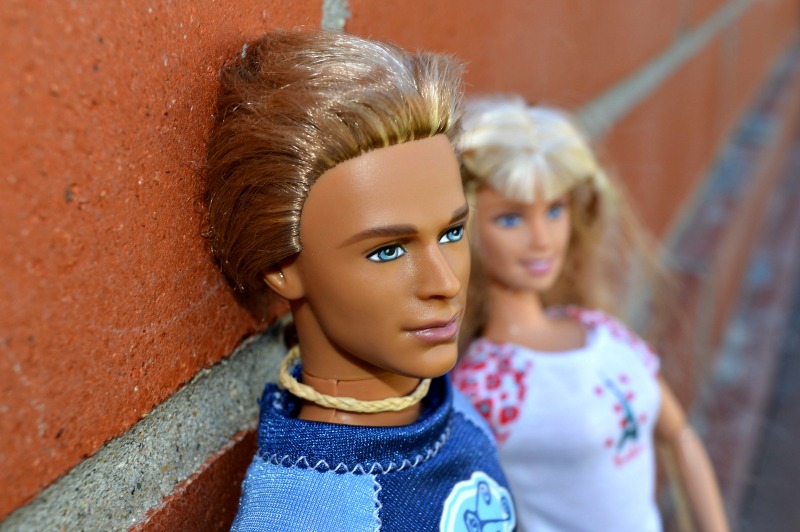 He took Barbie to Daddy’s house. It never came back. I asked his Dad to look for it but he couldn’t find it…..

So you know what, we went out and bought him a new one. He likes to change her clothes. She goes in the bath and she sometimes comes out with us. He plays with her no more than any other toy that he owns but so what if he did?

I think the big problem is homophobia. No matter how much people like to say that they are ok with the LGBT community, I think a lot of heterosexual men and homophobic women are afraid that their children might ‘turn out’ to be gay. Some people still think that sexuality can be learnt/imposed upon someone by their environment. It’s so bloody infuriating.

The other thing that really annoys me is, so what if my son does grow up to be gay? Who cares. What if he is transgender?  I want him to be brought up knowing that he can be whoever he wants to be. That he will be loved, cherished and respected no matter what. That no matter who he is, he never has to hide himself from me. Me allowing him to do things that girls do will not make him gay just as letting girls wear trousers, play football and become plumbers has not made any woman a lesbian.

I hope the world keeps on changing.