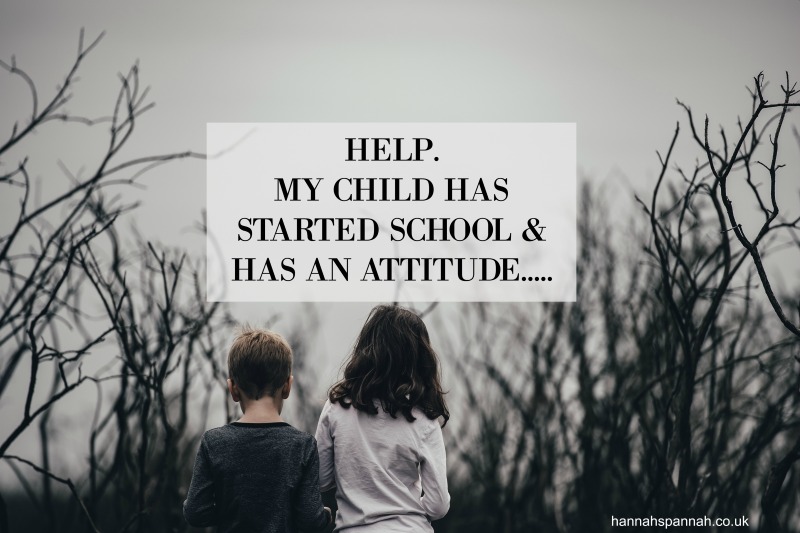 I know that I’m not the only one that is going through this, but when you’re in it, its hard to see what is going on. I just want to scream, Help! My child started school and has an attitude. Where has it come from?

Has this happened to you? Did your gorgeous, sweet, loving and playful child start school and then within a week, do an about turn and turn into a grumpy, grotty devil child?

Talking to my friends, it’s really common but where does it come from? Are they picking up the attitude from the playground? Are they cross with me because I have sent them to school full time?

The answer, I believe in most cases, is quite simple when you think about it.

Our gorgeous children have in most cases, just gone through the biggest change of their lives so far. They may have been to Nursery or Pre-School, prior to this, but school is different. They are in a different environment with lots of new children and people around them. They have so many new things to experience – sitting still in assembly and listening to grown ups talk about things that they may not have heard before. Just sitting for longer than a story can be hard for some. Then there are the much bigger kids that might look intimidating and they all seem to know what to do whilst our little ones are still finding their way around, possibly getting used to going to the bathroom alone, finding their way and back without being tempted to enter into a bit of innocent mischief with the soap and taps!

It’s a whole new environment to work out. Queuing up for lunch, getting changed for PE, learning new rules and codes of behaviour and the pecking order, making new friendships or feeling to shy to talk to children they don’t know. So many new things. And we talk to them about being good, eating up their lunch, being polite, listening and doing as they are told.

Now I don’t know about your 4 year old, or newly 5 year old, but that is a lot for my son. It’s a bombardment of the senses and most children will find it very tiring. They spend all day (we hope) being good, sitting still, listening and of course playing but it’s still a long day and they do what a lot of us do when we are tired and overloaded – we snap at those we love the most and feel the safest with.

Our children aren’t just being naughty, they are releasing the ‘stresses’ of the day, in the only way they know how. Now, I’m not saying that you have to give them a free pass through this stage of adjustment – they still need to know that they can’t behave or talk ‘like that’ but if we can, we need to be understanding of their emotions.

My son started school last Wednesday and went into full days (9am – 3.30pm) straight away. On Thursday night, after having a later tea to celebrate his Dad’s birthday, he had an epic melt down. His attitude was horrible. He was grumpy and uncommunicative in any way other than grunts and crossness. In the end, he melted into huge sobbing tears and said that he didn’t know why although I did, he was tired and overwhelmed, no matter that it has been a hugely positive and wonderful experience so far, starting Primary School has taken it out of him. Today is Thursday and he almost fell asleep on the way home and we have had tears again and unwillingness to do as is asked of him.

It’s hard not to get cross when they won’t do as you ask them, if they fight with siblings or speak with an attitude but try to keep in mind that this time will pass soon. They are adjusting to being a school pupil and even something as simple as getting used to wearing a uniform if it’s the first time, can be a big deal for some children. They’ve had a summer of relaxed fun where they have had more choice in their day and it’s hard at the beginning but you should notice an improvement in a couple of weeks or after the first month. Sleep, rest and time to chill out should be all that they need to help them adjust. You also might want to pause after school activities as well. My son’s gymnastic class actually told us not to come for the first month as they would be too tired and I was so grateful to them for this. My son still has lots of physical energy after school but mentally, he is tired and has no more self control left. We will be restarting activities after a month though and we’ll see how he copes.

If you are going through this and if things don’t improve and the behaviour change is massive, then never hesitate to talk to your child’s teacher and ask if they have noticed anything. If you are reading this in advance of your child starting school…..brace yourself.