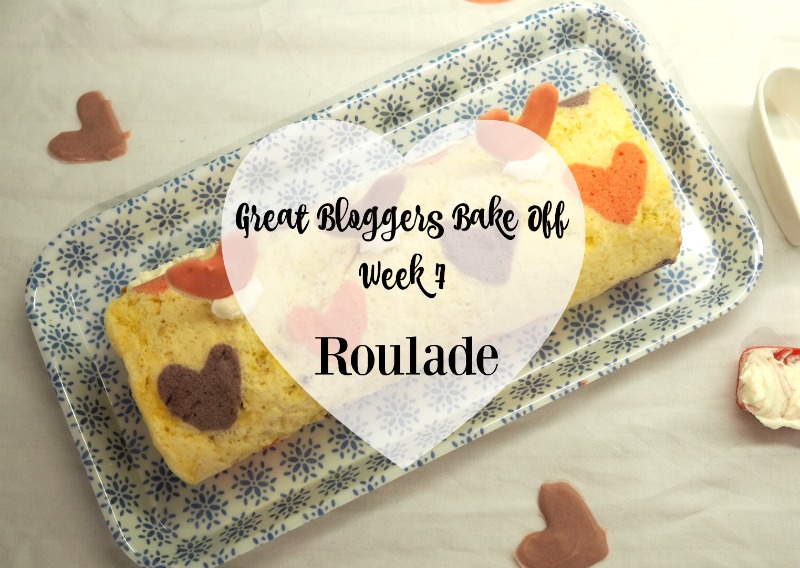 Week 7 – only 4 more weeks to go and this series will be over. This week is desserts week and I chose to make a Roulade for the Great Bloggers Bake Off.

I didn’t want to just make a plain and boring Roulade (despite never having made one before) and after seeing what Andrew did by piping stripes onto his, prior to baking, it got me thinking.

I wasn’t sure if piping would be the best for me as I wanted the shapes to look as uniform as possible and so I made a bit of a stencil. I took about 4 pieces of card, sellotaped them together and cut out a heart shape. I then wrapped the inside of the heart with sellotape so that the card wouldn’t disintegrate.

I then made a thicker baking ‘paste’ for the decorations.

Now it was time to stencil the hearts onto the baking sheet. I very casually ‘eye balled’ the spacing but didn’t do too bad a job. In hindsight, I wish that instead of putting the pattern vertically, I had pasted them horizontally but it didn’t matter too much. When I had finished the hearts, I put the baking tray into the freezer to set for 15 minutes. 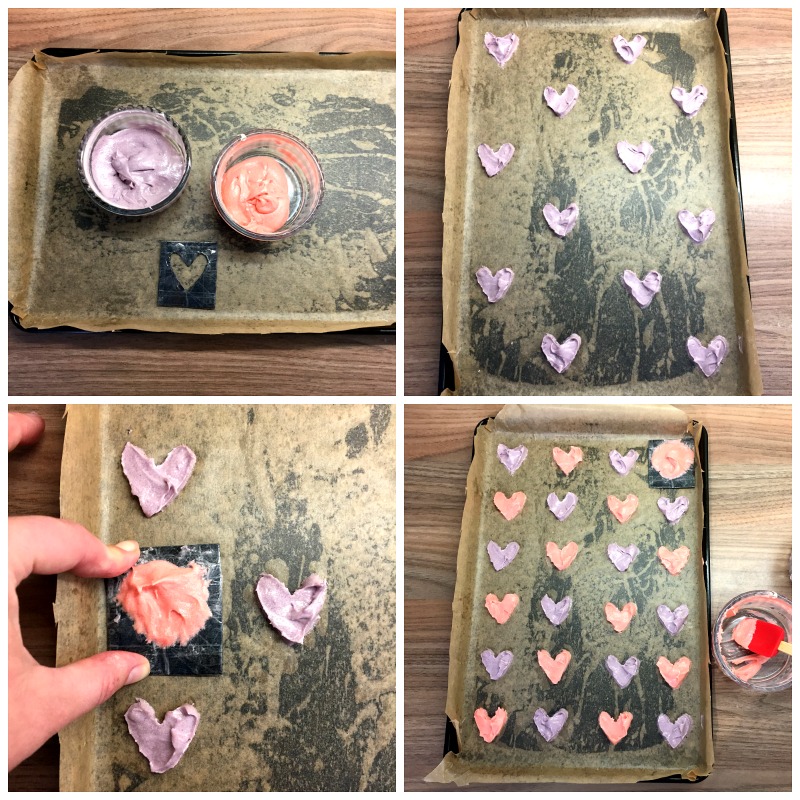 Next I made the sponge. Like Salassi, my recipe calls for butter.

I had preheated my oven and so took the baking tray out of the freezer, poured the cake mixture on top of the frozen hearts and gently tapped the tray on to the work surface before baking. 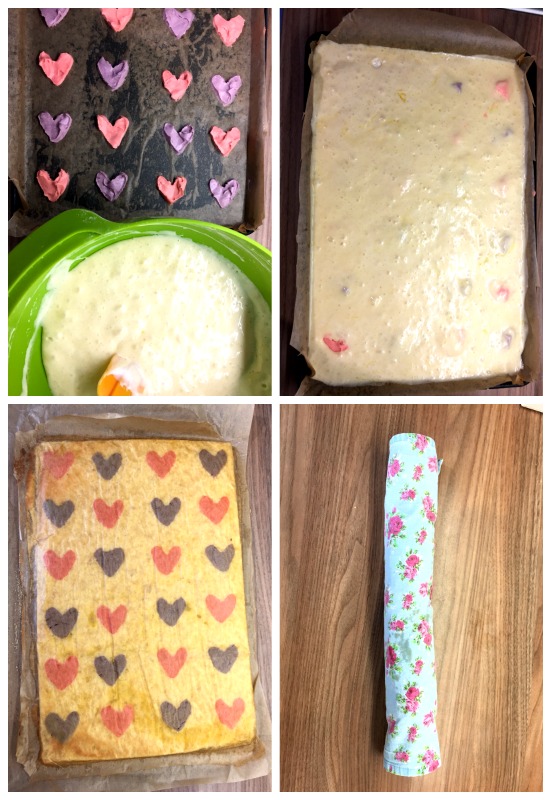 I checked it after 7 minutes but in the end, it took about 10 minutes. I was terrified of over baking it and it cracking when I rolled it!

Rolling it with the pattern isn’t quite as simple as without. First I had to flip the sponge out onto some baking paper, then flip it over onto a clean tea towel, and then gently roll it into a cylinder.

As it cooled, I made some simple coloured white chocolate hearts with the same stencil and made my butter cream.

As the sponge had cooled, I unrolled it carefully and then spread it with jam. I piped my buttercream on and then gently rolled it back up. 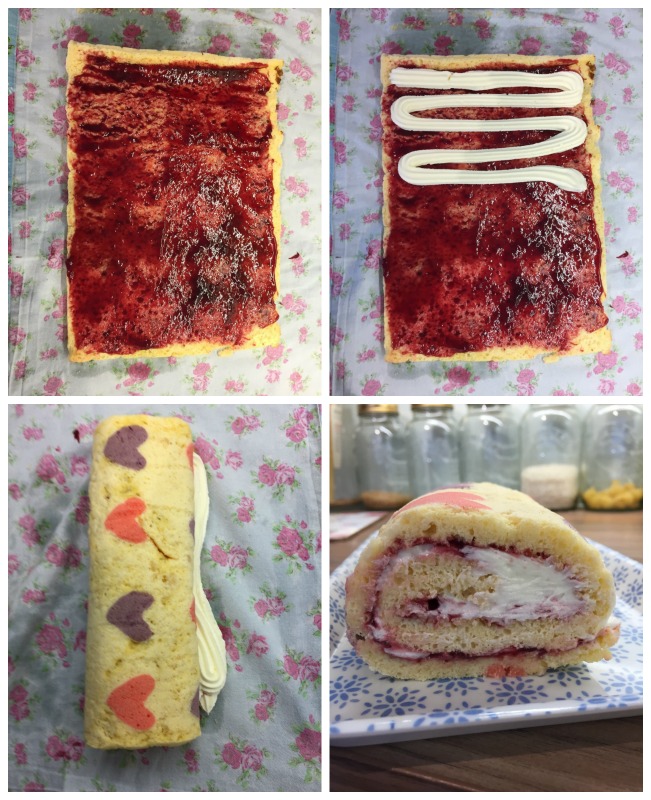 I’m really happy with the finished result. It’s not perfect and I think that the effect would have been better if the pattern was the other way round on the cake but still, I don’t think it’s bad for a first attempt. 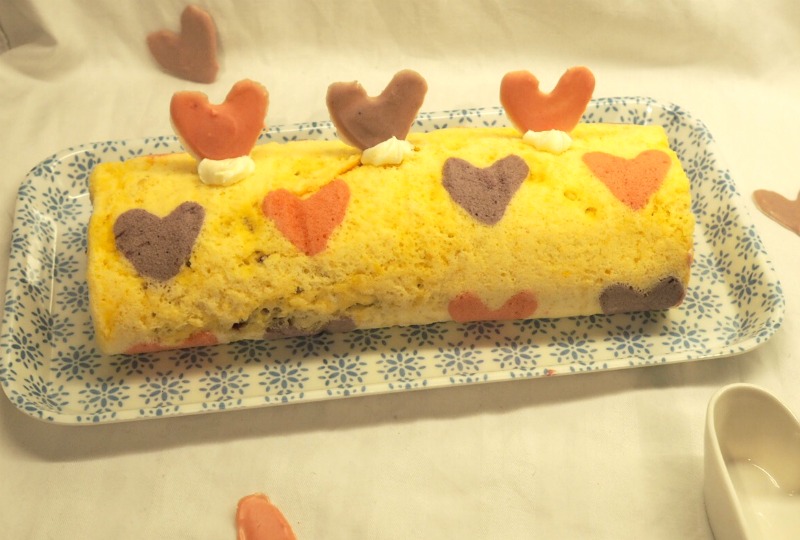 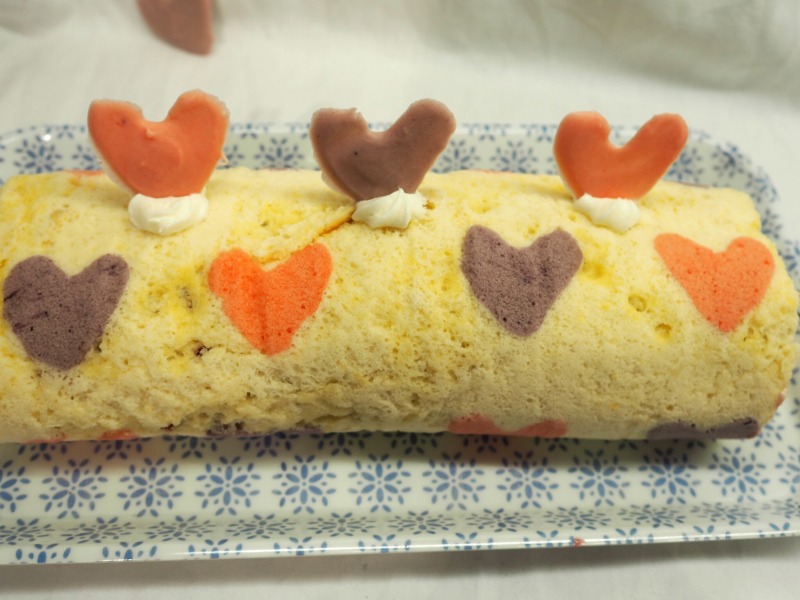 My other bakes as part of the Great Bloggers Bake Off have been: 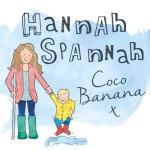