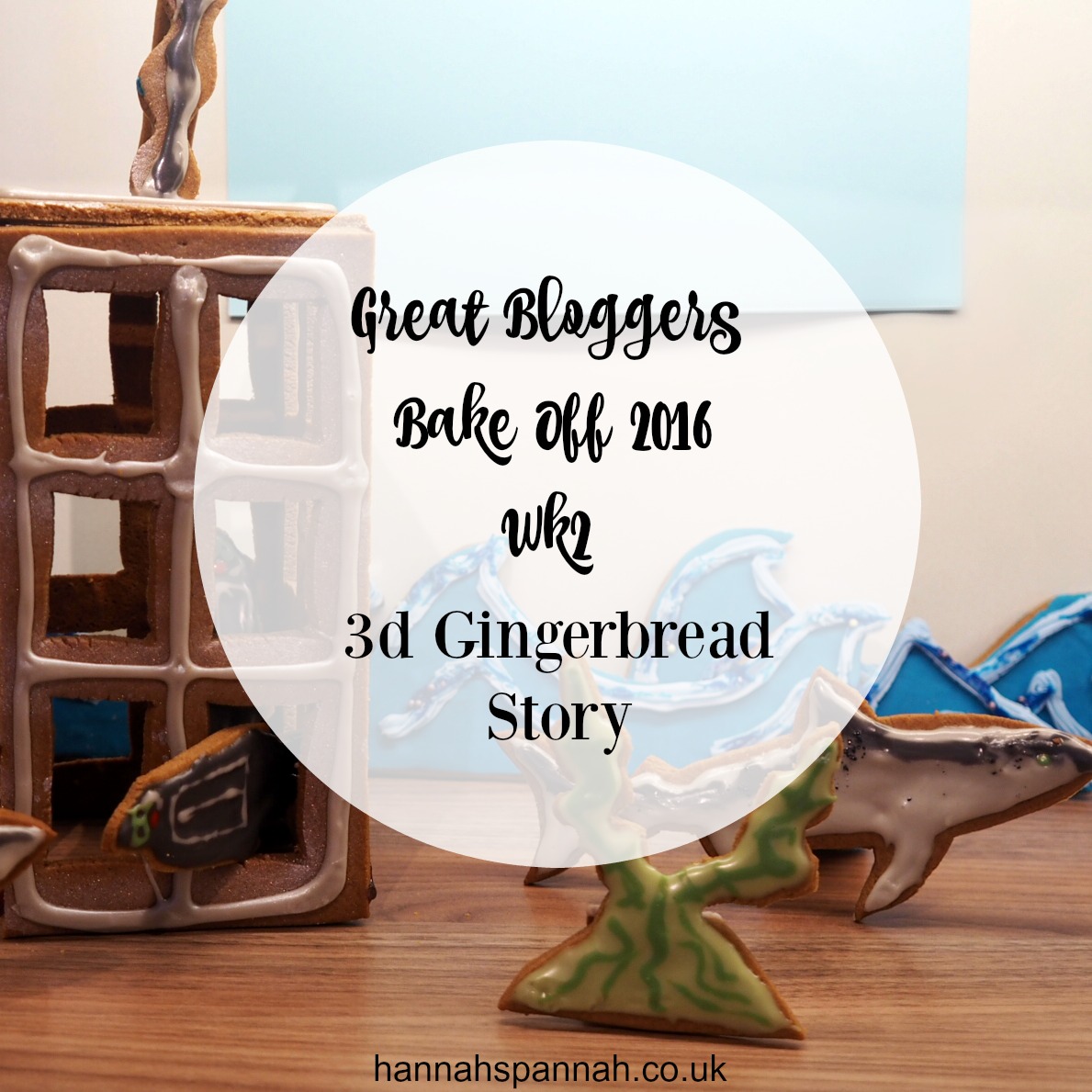 Welcome back to the Great Bloggers Bake off. As if I didn’t have enough to do, I decided this week, to make the show stopper, the Gingerbread Story. Oh boy.

The Great British Bake off theme 2016, for week 2, was biscuits.

The signature challenge was Iced Biscuits – 24 consistently baked and iced.

Showstopper =3D Gingerbread Story over 30cm tall and including 8 characters.

Icing, at this point, is not my strong point. I need to practice piping and this was not the time. The thought of Viennese Whirls didn’t blow my mind and I do like making gingerbread houses with my son at Christmas and so this was the one. I have to say that I chose this before I realised that it had to be 30cm tall and have 8 ‘characters’.

This being said, after I watched the episode and saw that one contestant made 5 gravestones, I wasn’t too bothered.

The story had to have something to do with our lives, or to be from an experience in our lives. I immediately knew what I wanted to make.

In 2004 (how is that 12 years ago?!) I travelled to Australia, on my own, for the sole purpose of cage diving with Great White Sharks. Yes, I am one of those people that loves sharks and does freaky things like get in a cage and have it be sunk to the sea floor so that I could watch gigantic scary creatures. 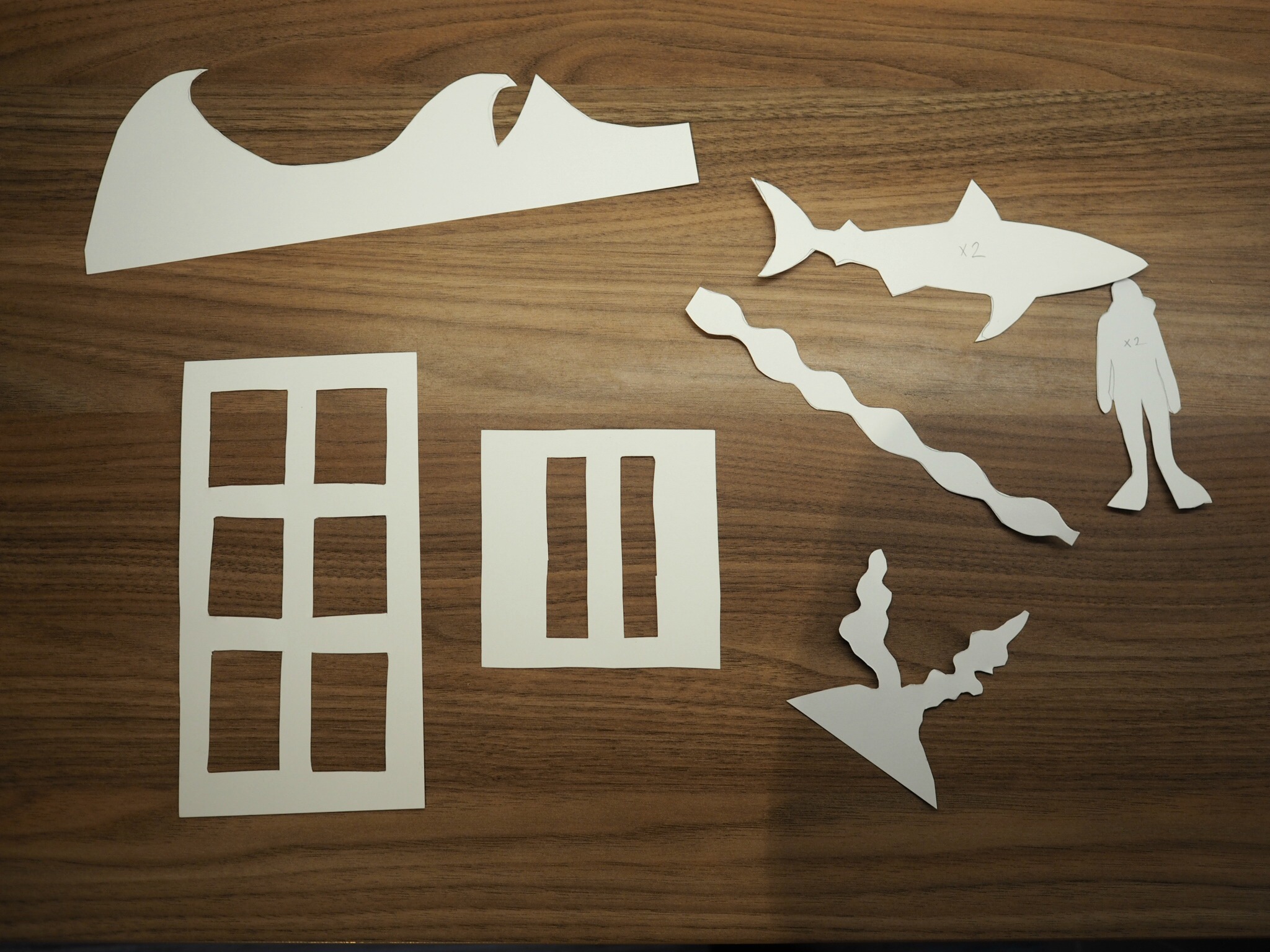 Next came the dough. I love to make a soft gingerbread with an egg in the recipe but after watching the judges both wanting a crispy gingerbread and the contestants saying that the structures were stronger without an egg, I adapted a different recipe.

My biggest tip to anyone making a gingerbread structure or house, would be to cut some greaseproof paper first, roll the dough on to the paper and cut the piece out there and then so that you don’t have to lift it up and move it on to a tray which could change the shape of your cut out. Instead, you can just slide it onto a baking tray and it will retain its shape. Keep going until it’s all cut out and baked. 24 pieces in total for me (if you include the rectangles of biscuit to be used to stand the ‘characters’ up.

Then it came to a little decoration. What do you think of my piping work?! Fabulous isn’t it! Ha ha! Like a lot of the contestants, I simply didn’t have enough time to spend on the piping. I also don’t have a lot of the necessary equipment so just did my best. I made a grey icing for the cage and when that had been piped and had dried, I sprayed it with silver food colouring spray. Fun! I then moved onto the divers – one is myself and the other is Andrew Fox who I went diving with. Hope you can see the likeness Andrew! 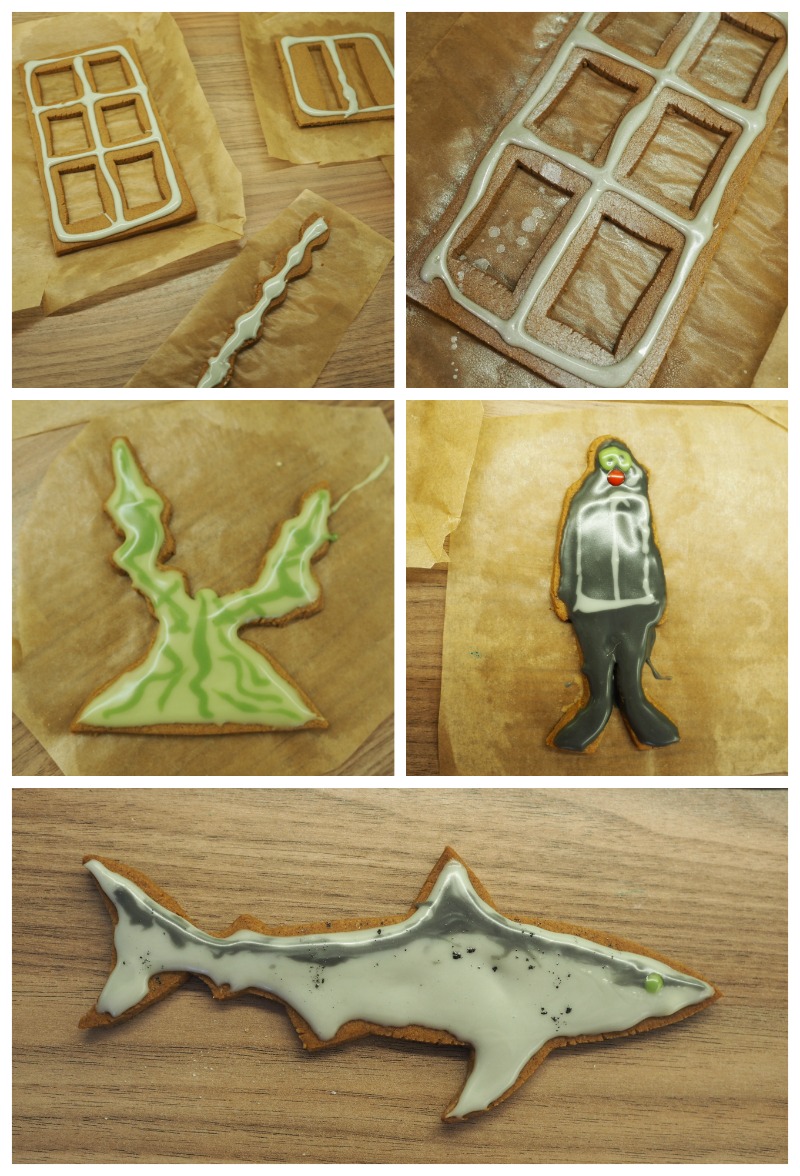 For the waves, I rolled out ready made royal icing and cut it to shape. I then iced it with lighter blue icing and then a little darker blue. 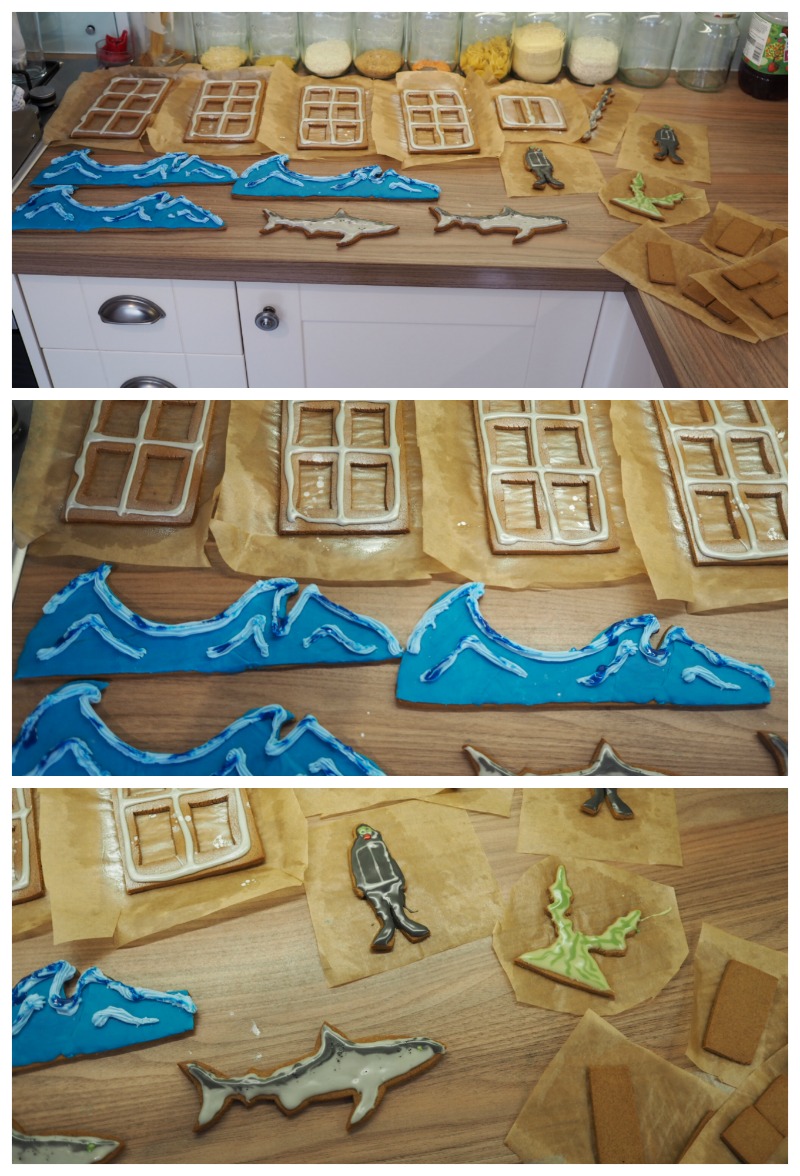 After everything was iced and dried, I began to put it all together. I decided, from experience of making gingerbread houses in the past and using icing as glue, I chose to use melted sugar as the glue in this instance. It worked! I was on my own when I made this and so there are no pictures of me putting it together but it went really well. Just BE CAREFUL with boiling sugar as the burns are painful! I got a tiny spot on my little finger and it hurt!

I placed one diver into the cage and then put the diver that depicts Andrew, half out of the cage as he photographs the sharks professionally and I remember being so nervous for him when he did so during one of our dives!

So here is my finished 3d Gingerbread Story. Cage diving with Great White Sharks in Australia, with a cage, 2 divers, 2 sharks, a piece of sea weed and 3 waves. Oh and a chain to make the structure over 30cm tall!

It’s not perfect but I am proud of it in some kind of way! Excuse the picture – I would have moved it to a better back drop but I didn’t dare and so I covered the ugly plug socket with a piece of card! 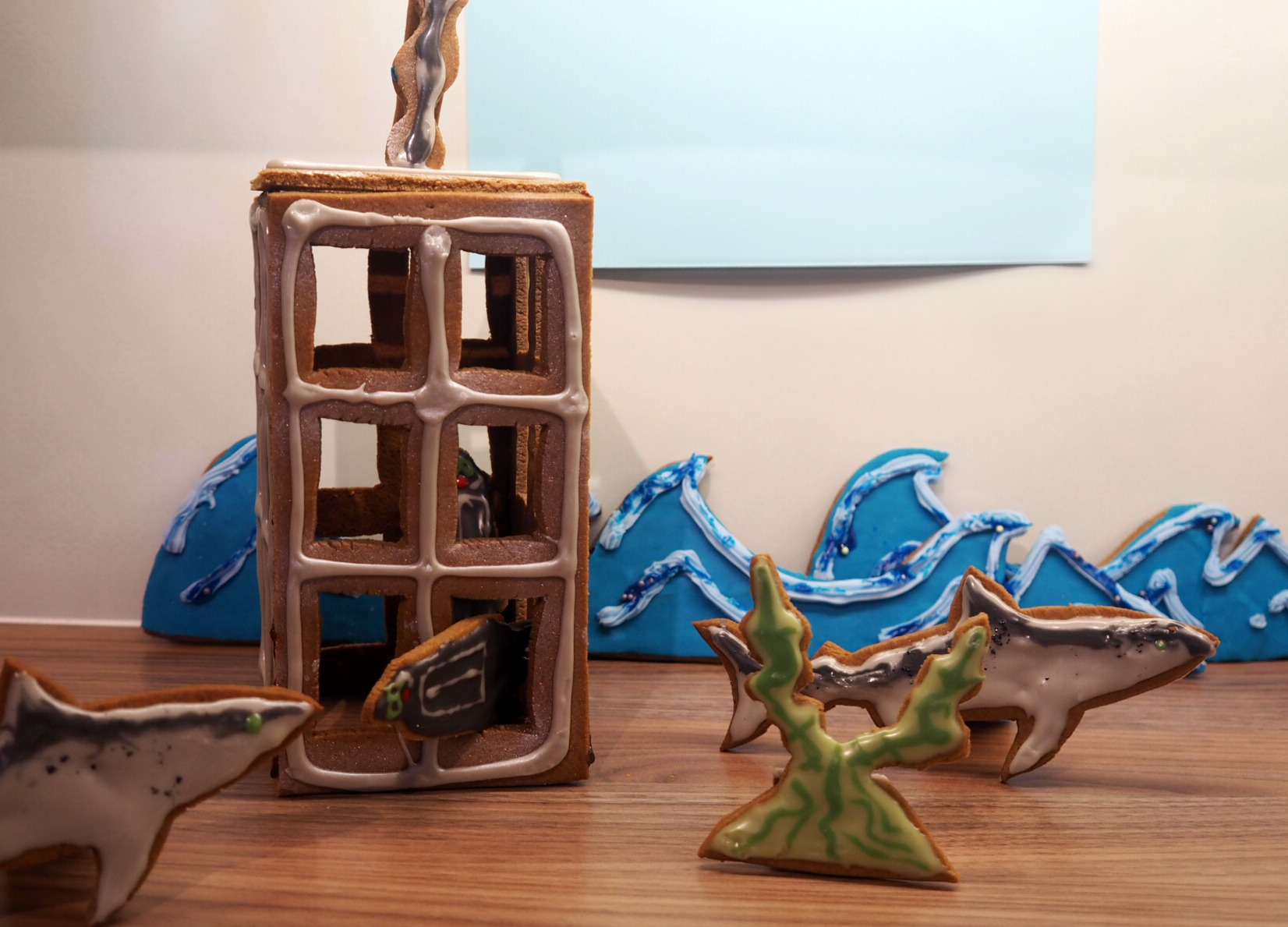 I hope you like the look of my 3d Gingerbread Story. If you missed it, last week I had a bit of a fail with my Giant Mirror Glazed Jaffa Cake. Let me know what you think!