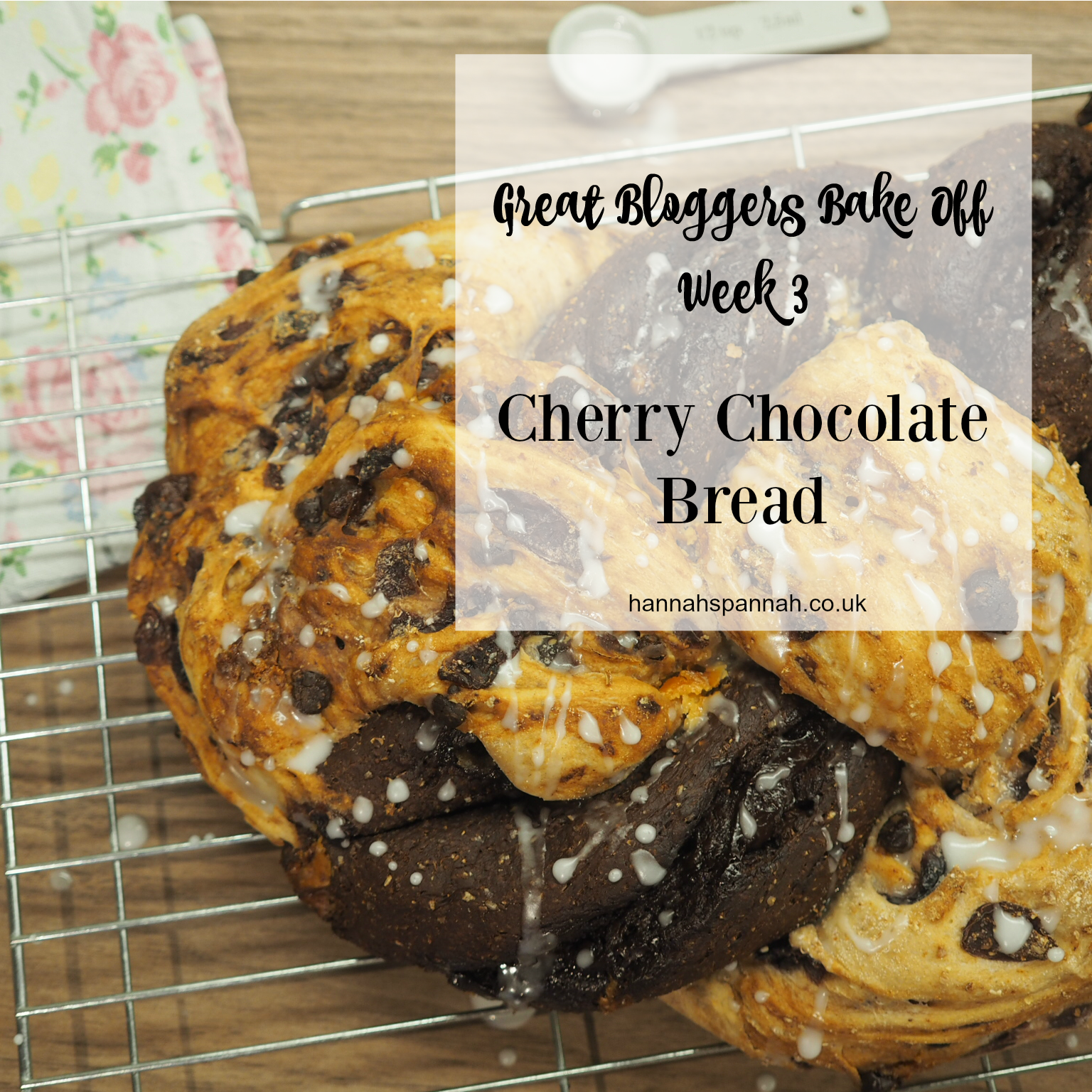 Ready, steady, baaaake…. It’s  the Great Bloggers Bake Off Week 3, and this week is bread week. Guess what? Last week was biscuit week and I only went and got star baker for my gingerbread scene! Woo hoo! I may have peaked too soon, but I’ll take it!

I’m putting this out there straight away – I’ve not baked bread for ages and when I have, its usually been hedgehog rolls with kids when I was a nanny and they are not always the best connoisseurs and will eat virtually anything if they’ve baked it themselves.

So, the signature challenge was Chocolate Bread, the technical was Dampfnudel (google it if you want to know more about it) and for the showstopper they had to bake a savoury platted centrepiece using 3 different flours.

Ok. Damfnudel. That does not float my boat. A centrepiece with 3 different flours? Not happening. I don’t have enough cash, know how or inclination for that. Chocolate bread? Err, hello? Chocolate? Bread? It’s practically a cake! Well, it’s not and it isn’t allowed to be otherwise Paul would not be happy. It has to have the texture of bread but the taste of chocolate.

I started by googling recipes to adapt and it turns out that both of the ones I liked, were by Paul Hollywood himself. Clever man. I couldn’t decide which one to bake and so decided that I would make both and then entwine them to make one loaf and also add a twist or two. mainly by adding more chocolate, which may or may not work. Who knows!

The first recipe I followed was his Cherry and Chocolate loaf as the first prove for this one was longer than the second recipe.

The dough was really nice until I got to the part where I added the cherries. It turned into a wet, sticky mess and I thought I’d never get the cherries incorporated but thankfully he says you can add more four and boy did I. I have no idea how much but I added a little at a time until it no longer resembled slop.

It then went to prove and I started on the second dough.

This bread calls for strong bread four but all I had in the cupboard was strong wholemeal flour. Fingers crossed it works! If so, it’ll be a little better for you. Yay! You can eat more, it’s positively a health food…!?

Mistake number one. You are supposed to let it prove for the first time, BEFORE you add the chocolate chips. Oh well. They went in with the rest of the ingredients, and some white chocolate for luck. Paul would be calling me an idiot right now if he knew.

That then went to prove.

After an hour (which means the first cherry dough had an hour and a half to prove), I went to see how they had proved and shape the dough, ready for the next prove.

Holy cow. The cherry dough rise was brilliant! It never fails to impress me, the magic of yeast. The chocolate dough. Well. It looked the same as it did an hour ago. Nooooo!

I checked Paul’s recipe – surely the wholemeal flour and the adding of the chocolate couldn’t have had that much of a drastic effect? Paul’s wording for the first prove is to put the dough back in the bowl and leave it for an hour to ‘rest’. He doesn’t say rise. Maybe it will be ok?

With a little bit of hope, I split each dough into two pieces and shaped them into long strands.

I don’t buy Nutella but when it came to this bake, I thought that I would buy some, however, when I got to the aisle, I noticed this chocolate hazelnut spread that said it had 83% less sugar than most brands and so knowing that it would probably not taste all that great, I bought it anyway. Why not? 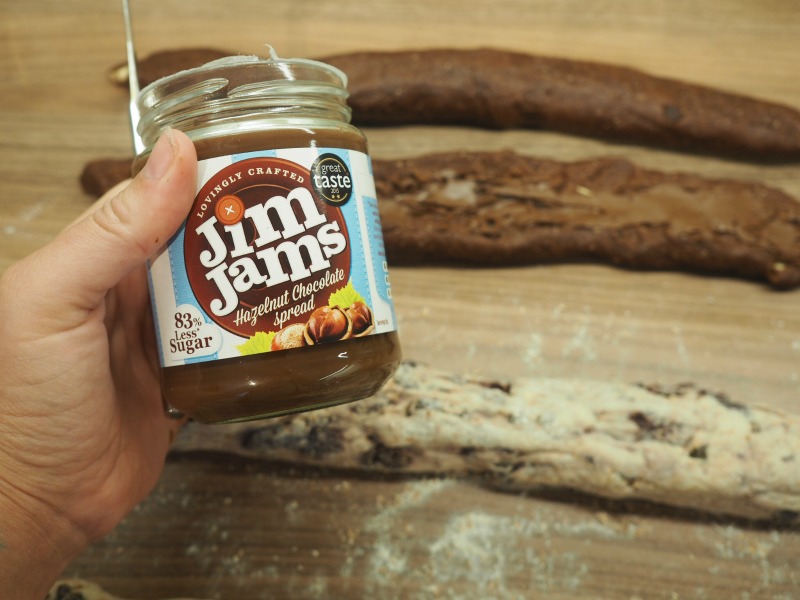 So, it turns out that it tastes amazing. I decided to add some to the middle of the chocolate strands, ‘cos why the hell not? (By the way, I’m not working with the company, I just really like it!) I did this and then moved them onto a baking tray and using an internet tutorial, I had a go at a 4 strand plait. I did it!

Then it was time to let it prove again. Please let the chocolate part rise as it is meant to this time!

It had been another hour and I went to look at the dough. 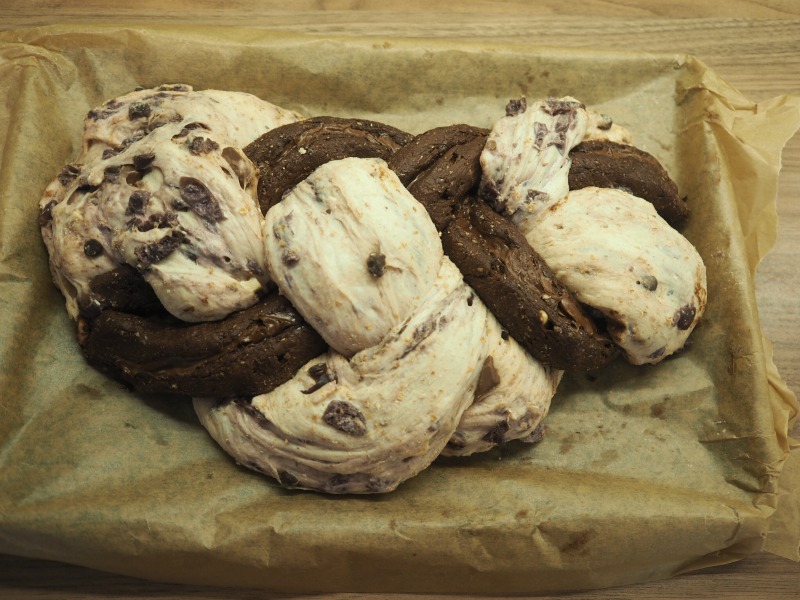 Crap. The chocolate dough didn’t rise. I’m guessing that it’s because of the wholemeal flour. Darn it. Hey ho, it was time to shove it in the oven.

The baking times were slightly different but in the end it didn’t matter as the dog started ‘talking’, barking and turning circles around me, showing me that is was time for a walk. It had been in the oven for about 15 minutes at this point and so I turned it down a little a took the dog out. I don’t know how long it was in for but it was looking a good colour when we got back and so I took it out. It smelt great. In fact the house smells amazing. 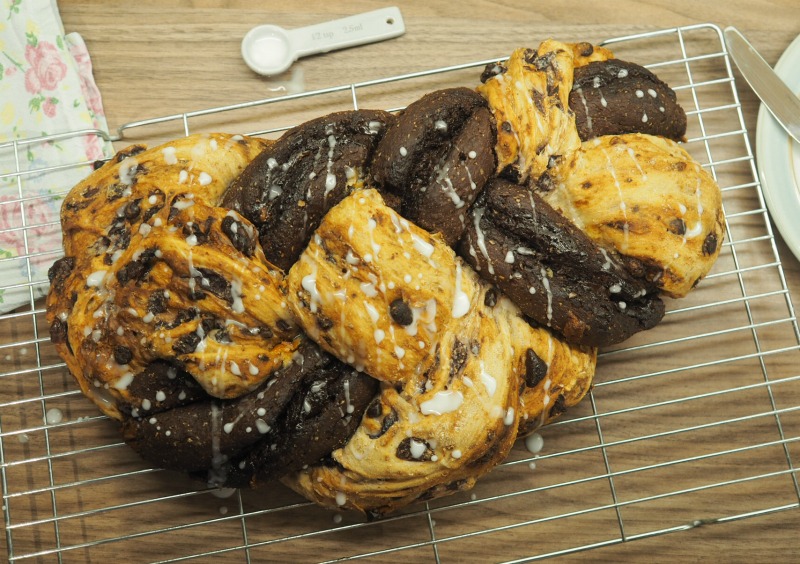 I left it to cool before slicing and tasting. I was a little hesitant about the chocolate loaf and so tasted the cherry loaf first – it was really tasty. It tasted like bread, tasted like chocolate and had the texture of bread with gooiey bits. Win. Then I tried the chocolate part and was pleasantly surprised. It was a closer texture than the cherry one, of course but it was still light and tasted really nice. 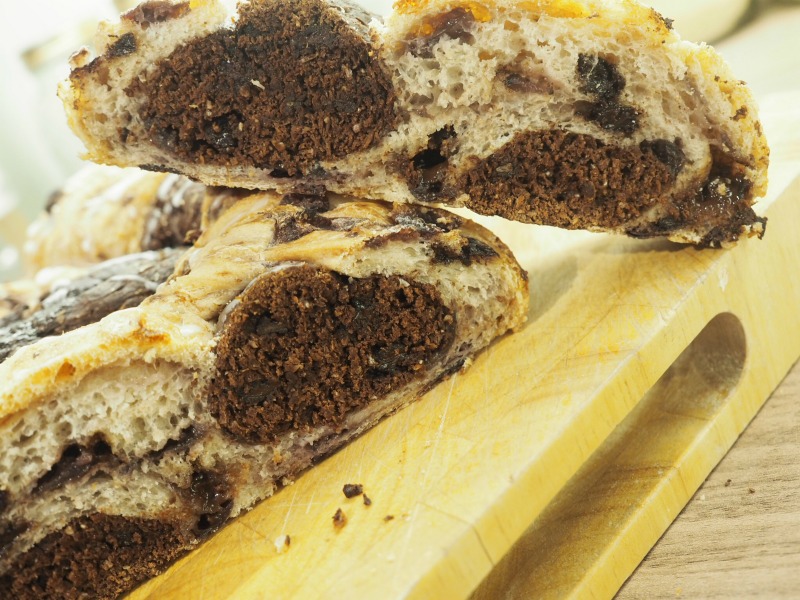 So what have I learnt this week? That the right ingredients count and that I need to stop complicating things.

My bakes so far this year.