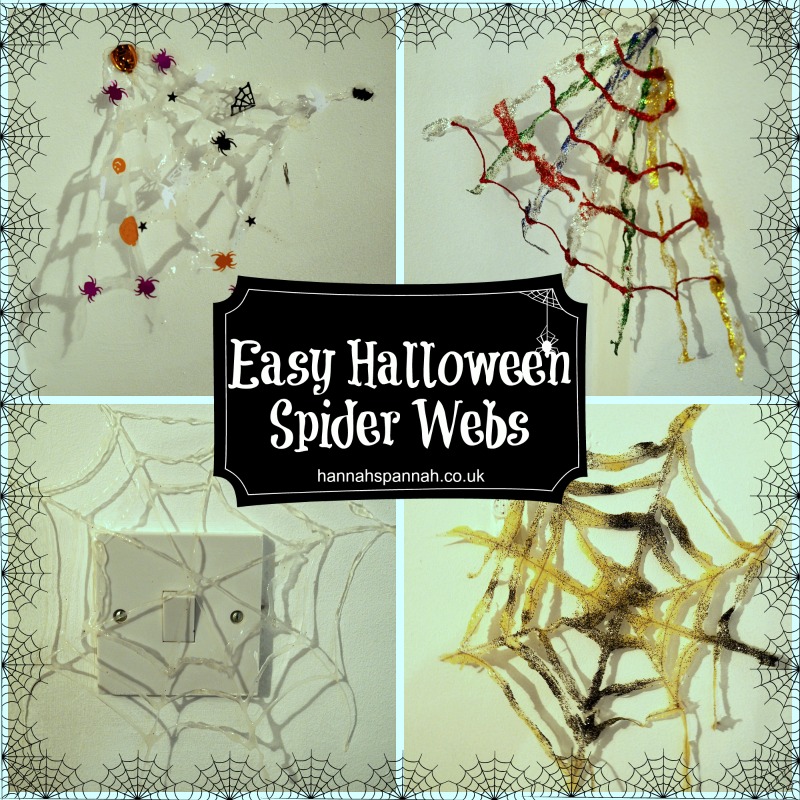 Time is flying this year. I don’t mean to make it go any faster for you by posting this, but with Halloween on the horizon (or at least being the next ‘celebration’ coming up), I wanted to show you our Easy Halloween Spider Web Craft.

Last year, we made a few Halloween crafts and still have them to put up again this year and so wanted to try something new.

I’ve seen this technique on Facebook, but people use hot glue guns generally. I do have a glue gun but not everyone does and so I wanted to try it with good old normal white school glue and see what happened.

What I learnt is that it’s best to make the glue lines dense with glue if that makes sense – the more thinly spread out that they are, the harder they are to peel off, so after the kids have done their bit, you might want to add a little more glue – this will all make sense as you read the post! I do wonder if it would peel of a plastic paper sleeve better (you know the ones you put in ring binders?) but I didn’t have any at hand, so used baking paper.

For this craft, you will need: 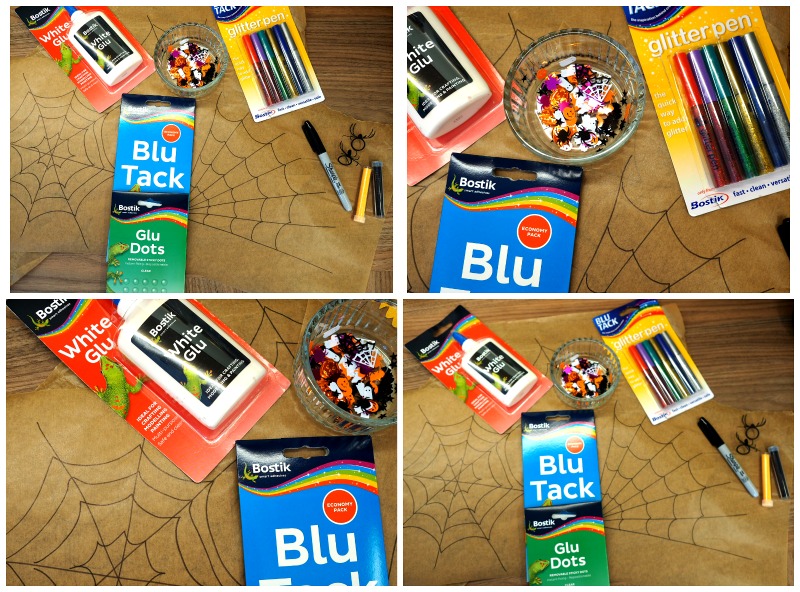 So, I started with the baking paper and pen. I drew a web shape, or in fact, 4 webs, two of each design. Full webs and corner webs.

Then I turned the paper over and indulged my crafty side by making the first one on my own when my son was at school. I simply squeezed the glue onto the paper, following the lines that I drew and then left it to dry. However, I found it hard to squeeze the glue out, due to my stupid weak hands and wrists and knew that my son would also struggle. 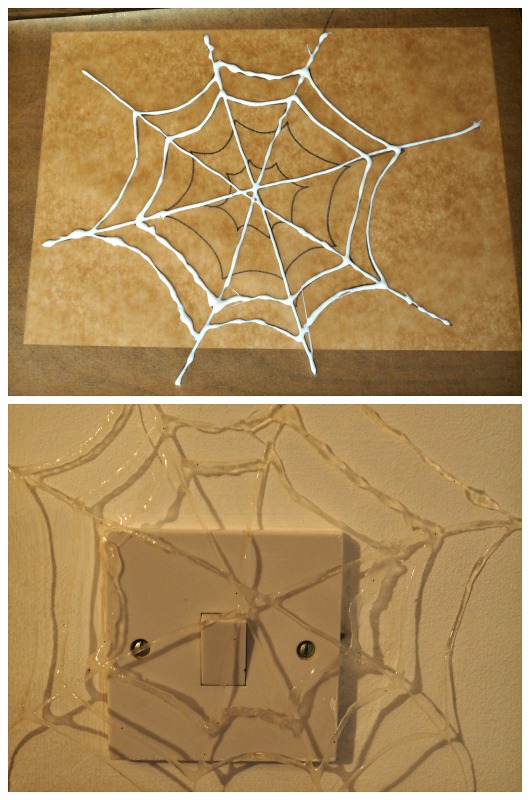 Baring this in mind, I thought we would try a different technique – glue and a cotton bud. Bear found this quite easy to do and really enjoyed it. I added a little more glue after he had finished, but as I wrote above, I wish I had added a little more. Don’t worry about being precise – if the kids go off piste, it almost adds to the overall look. Yay! I like crafts where mistakes can make them better.

Bear tried glitter glue webs which worked well and sprinkled halloween confetti shapes on one and orange and black glitter on the other. That was his favourite bit and I saw his age and development through this as he was really careful and precise. 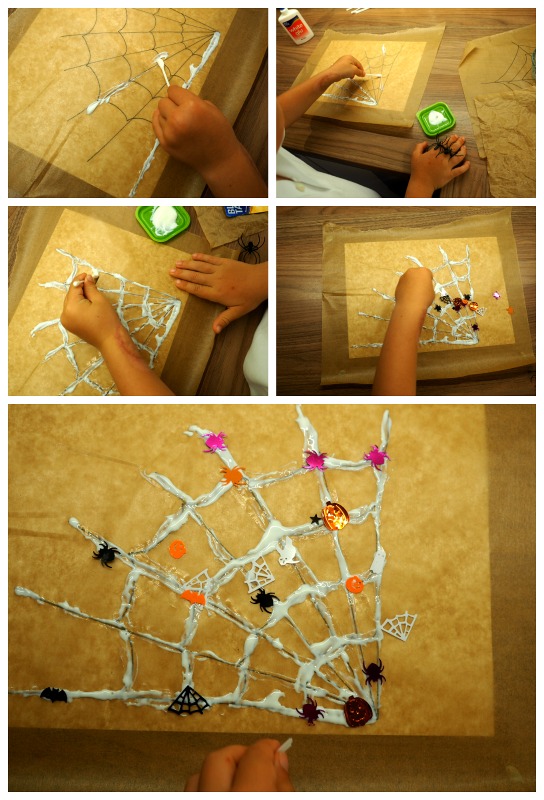 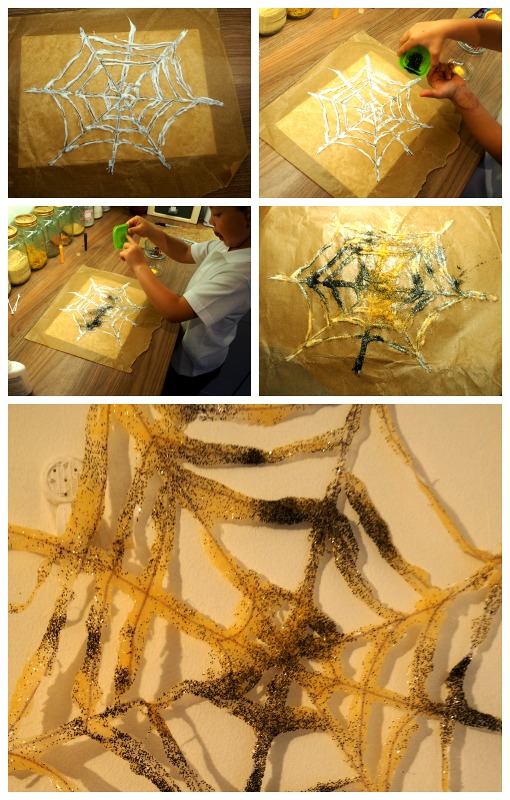 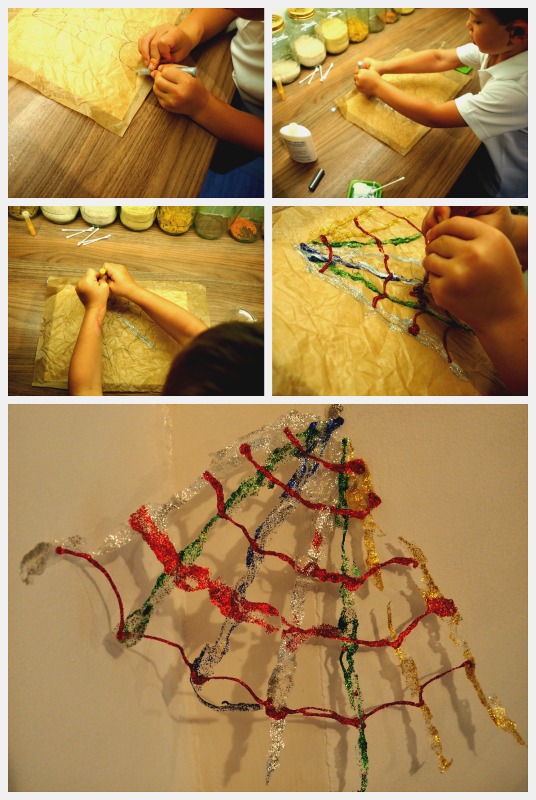 We left them to dry and then it was my job to peel them off. The one that I made on my own was easy to peel off, my son’s, less so, because the glue was thinner and flatter but I managed (be patient as it’s worth it!) with only one or two breaks. I dealt with that by laying them back on the paper and glueing the breaks with a blob of glue and leaving them to dry again.

When they had fully dried after being fixed, I peeled them off and then stuck them on the inside of my windows. Tadaa – Easy Halloween Spider Webs to help decorate the house. You can also use Blu tac to hang them on your walls or even better the Bostik Glu dots don’t leave a mark when removed and are invisible.

I hope you give this a go and like it. I also made some easy Halloween Food last year that I will be repeating again.

Disclosure: Bostik supplied the craft materials to enable me to create this tutorial