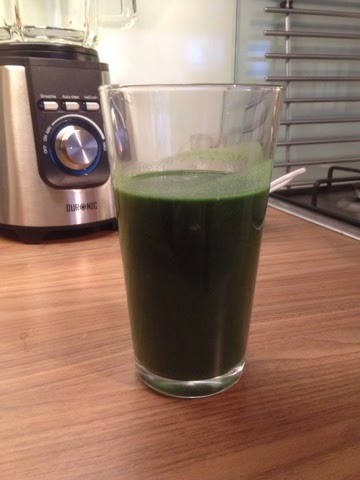 Well, the thought of something new, certainly helped me to get out of bed this morning after my oh so (non) refreshing almost 5hrs sleep. How on earth Margaret Thatcher lived off this small amount of sleep, every night, is always questionable to me! I wish I could.
Each morning starts with hot water and lemon slices to ‘fire your stomach up’.
I’ve watched other people request this to drink whilst I’ve had my double shot no foam latte, and wondered why on earth? Turns out it’s quite nice. I thought it would taste like cold water with lemon in it- just a hint but the lemon is nice and strong and I didn’t mind it at all.
An hour later and it was time to try my brand new juicer. I was quite scared that I’d put an apple in and the motor would stick and burn out, due to how reasonable the cost was compared to others- the revered Nutri Bullet is almost £100 and mine didn’t even cost half that. The Nutri Bulllet does look good though!!
Take a look if you’re interested:
This is the one that I purchased, and this is the Nutri Bullet.
So, I degress, as always. The first juice. Hmmmmn. The juice itself was really nice. Then you add the Spirulina powder and Wheatgrass powder and things change! It’s not awful but it’s a taste that will need to grow on you. I think the texture of the powder in the juice put me off most however, I didn’t follow the rules completely so that could be my fault. You are supposed to then blend the juice with the supplement powders, half an avocado and ice cubes. I forgot to make Ice last night and that could be where I went wrong. The extra whizz, time and water might make the powder dissolve…? Time will tell. Ice cubes are almost frozen for the rest of the day.
So here is the juice that you drink at breakfast and again at 11am: 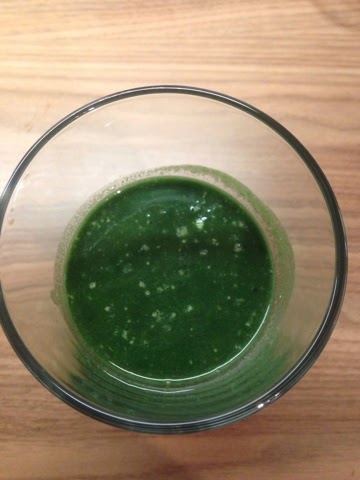 You don’t get much greener than that!!
The Spirulina and Wheatgrass powders give it the deep intense green colour.
The first one was a bit of a chore. I expected to love it and started to drink it but wasn’t so sure. I drank some lemon water in between mouthfuls to make it easier.
However…..the 11am juice, exactly the same and again with no ice cubes, went down so much better. Maybe I am already adjusting to the new taste. I also drank a cup of hot water with mint leaves in, alongside the juice and I actually enjoyed it!
My next juice is in a couple of hours and I am in no way hungry at all which is fabulous.
Before I go any further, I should confess my sins. The Bear forced a piece of banana into my mouth at snack time and I ate it without blinking. Then I realised and quietly said ‘oh sh*t’ to myself, balls!!
The real confession is my weight.
Due to my lack of mobility, I ballooned in pregnancy but thankfully I’m on my way back down. It’s shameful though. My poor wii avatar is a chubster!! 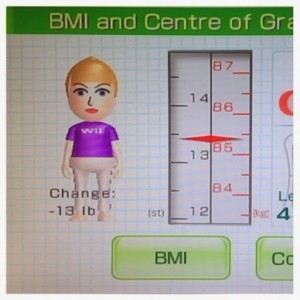 So. 13.6 stone shall we say? OMG. Horrific. Before pregnancy, my fighting weight, as in my usual weight that I seemed to stick at, was 11.7 stone. I fluctuated up and down but always went back to there. It was well within the healthy range for my height but my dream was to be 10.7 stone. Quite a way off from now! Buuuuut, the good news, my little silver lining, is that I’ve lost 13lbs since I last weighed myself. That was probably me at my heaviest, before the drs found the right drugs that would help the pain and my life improved somewhat.
Back to juice- The next two juicies of the day were really nice- none of the suppliments were in there- that’s the difference! I wonder if you could take the spirulina and wheatgrass on capsule form and if it would work as well? Jason Vale grows his own Wheatgrass and juices that. I wonder if it tastes different? Anyway. I shouldn’t moan, it’s not that bad.
I also had some ice cubes ready and so as per the instructions for the ‘Turbo Juice’. I juiced and then blended the juice with ice and avocado and wow! It was a thicker, creamier, goegeous smoothie! I’m hopeful that the morning ones will be just as good as they contain avocado as well. Ice cubes are essential!
I’m having an early night as I’m not feeling good. I’m not hungry which is great and I feel ok but I’ve done a lot with my Bear today and all the juicing does mean standing on your feet a lot. I don’t think it’s the juicing that’s made me feel this way, just over doing it.
Fingers crossed for the morning!