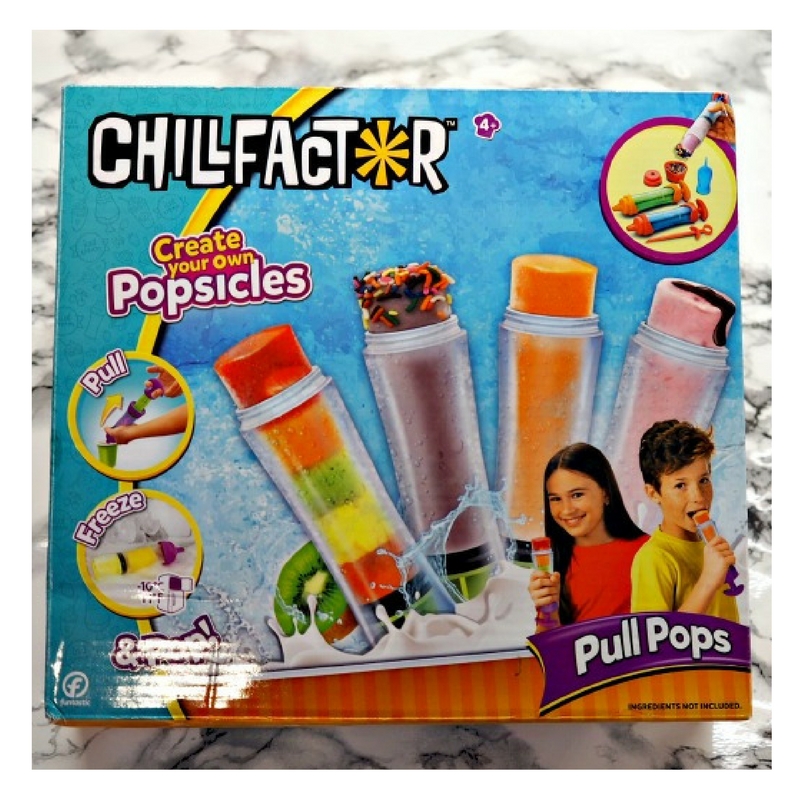 Bear was so excited when he opened this package and realised what we had been sent to review. The Chillfactor Pull Pops kit comes with everything that you need (except the edible ingredients) to make ice pops / ice lolly’s, super easily and quick, once you perfect the technique.

You can watch our video of how to do it and see our initial mistakes and trouble shooting or keep reading.

How to make Chillfactor Pull Pops

First of all, empty the box and give everything a wash. You get two pull / suction plungers that are each made up of two parts, two clear moulds, two nozzles, a flavour shot squeezy bottle, a small mixing bowl (not shown), a flat nozzle and a flavour spacer to make a channel in a pop for a syrup. 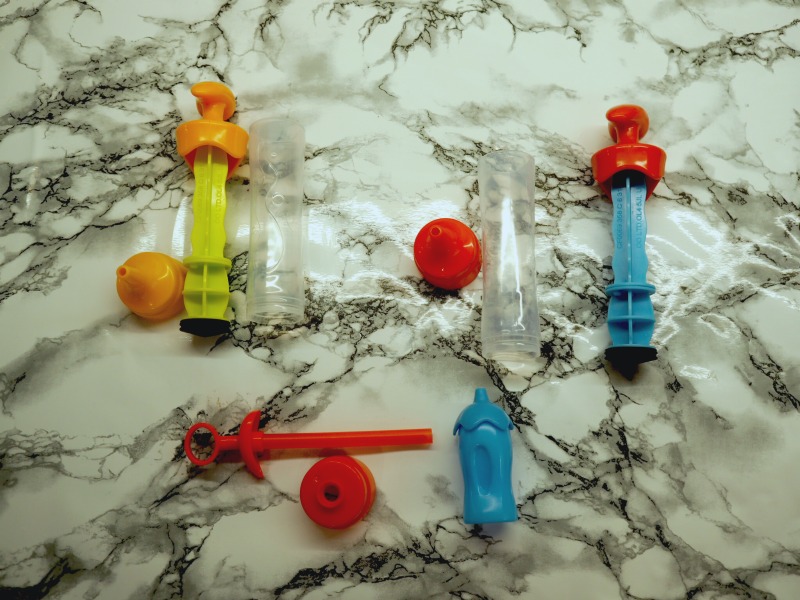 I would recommend that you take the two plungers apart as shown below and then put them back together. I didn’t and it was a bit stiff the first time and all my liquid came out as I broke the seal when trying to do it. 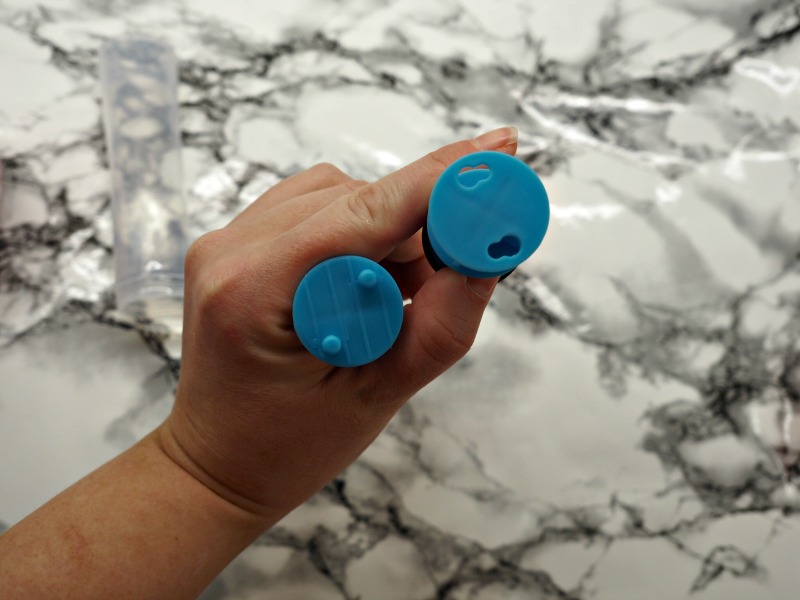 So, take your chosen liquid which could be smoothie with or without pieces of fruit, juice, yogurt, flavoured milk etc and after putting a pointed nozzle on the end of your pull pop, slowly, draw the liquid into the clear mould. On this occasion, I decided to try making one which will have a drizzle of syrup down the middle and so I needed to leave a gap at the top and not fill it 100% full. If you are going to make a simple one flavour pull pop, skip to step 6. 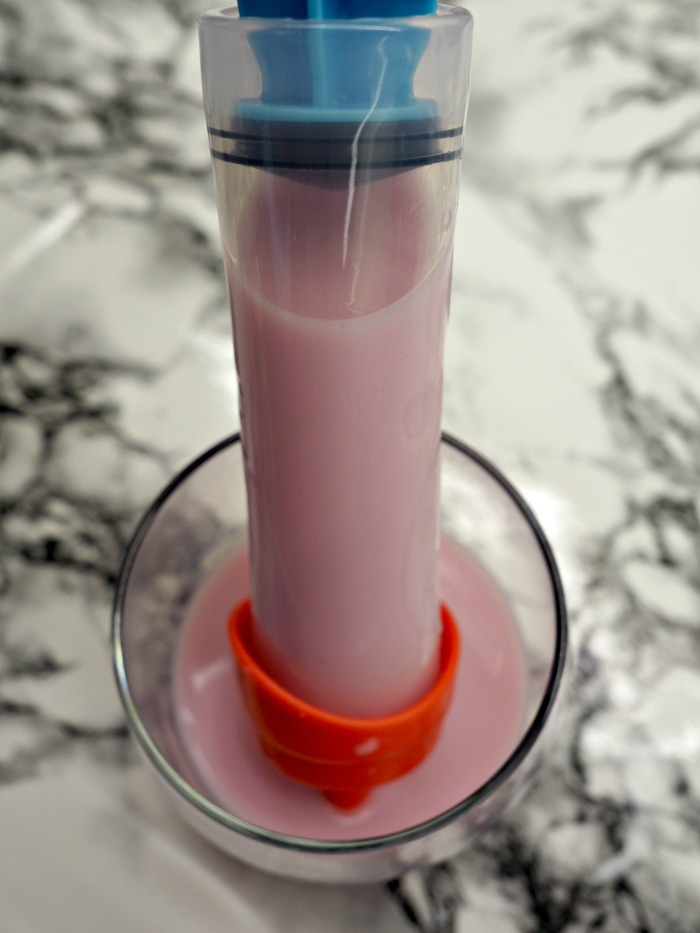 Turn you pull pop upside down, and take off the pointed nozzle (pull). 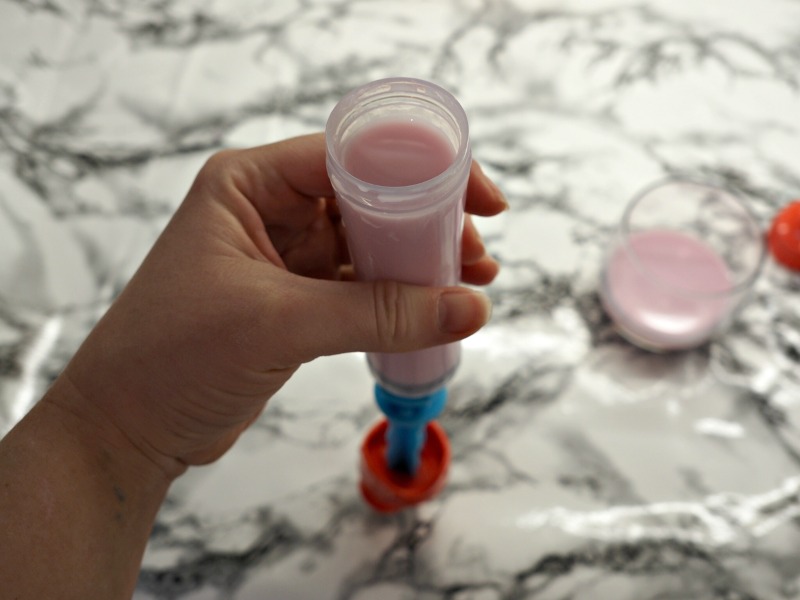 Put the flat nozzle on top of the pop and insert the flavour spacer. 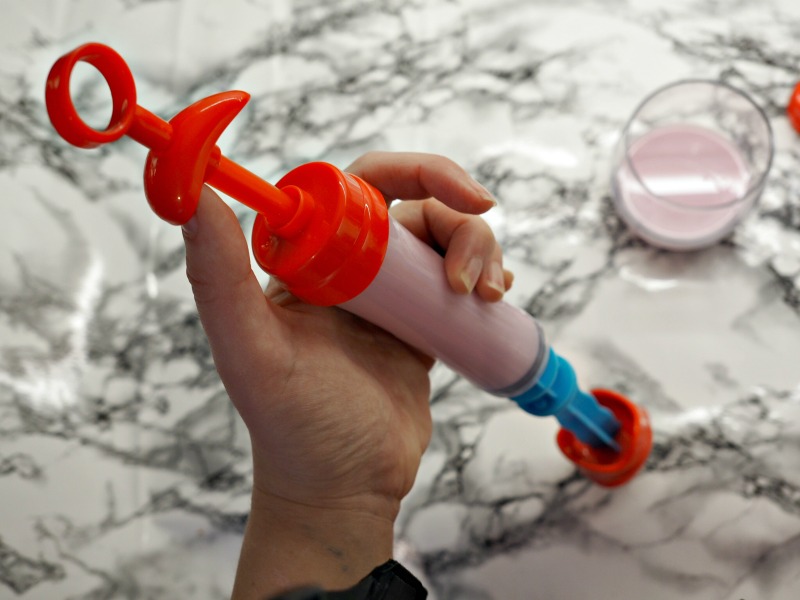 Carefully twist and pull the bottom part of the plunger handle off so that it can fit in your freezer. 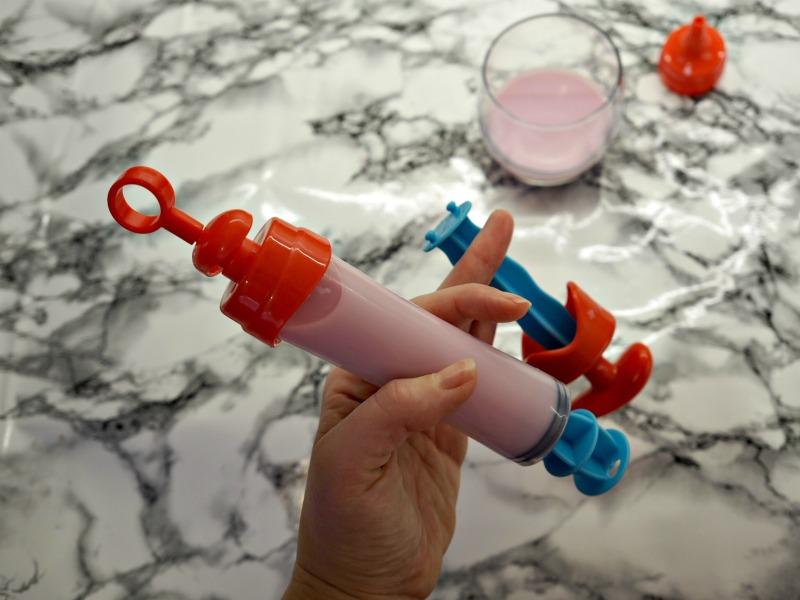 Put your pull pop in the freezer for at least a couple of hours or until frozen fully. I found it best to stand it in a plastic cup. 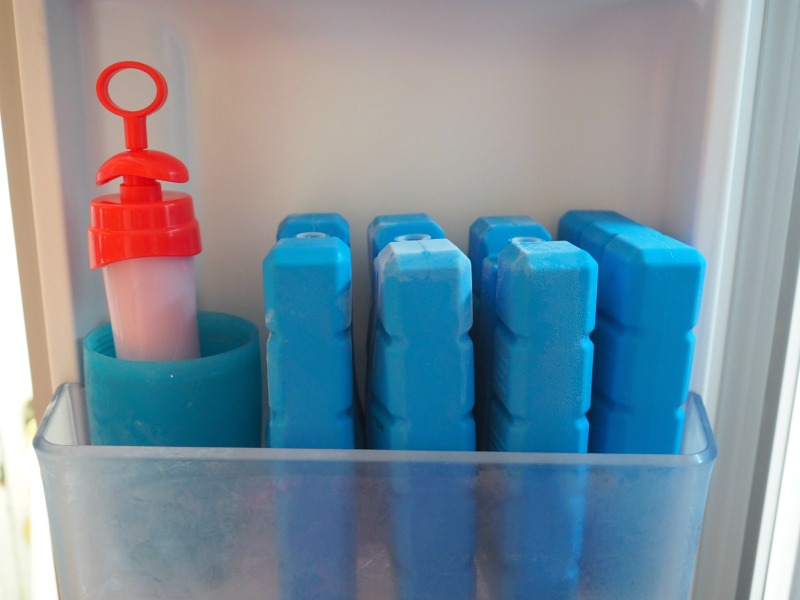 When frozen, take your pull pop out of the freezer, clip the bottom part of the plunger handle back on, take the nozzle off and enjoy your ice pop! You can rub it between your hands to warm the mould slightly which will then release the pop to be pushed up as high as you would like.

Or, if adding an extra flavour and/or sprinkles, take the pull pop out of the freezer and remove the flavour spacer and flat nozzle. 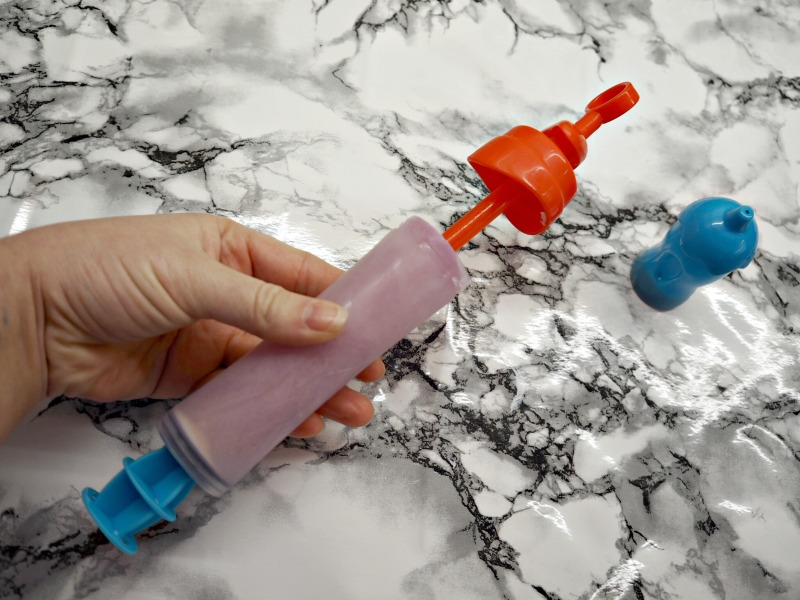 Take your chosen flavour syrup and squeeze it into the middle of your pop. 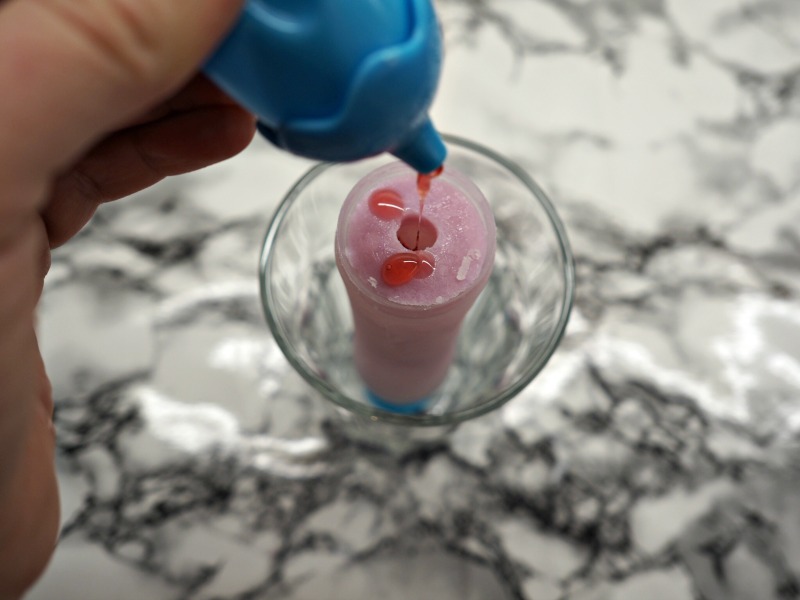 Add sprinkles and hand over to your child. 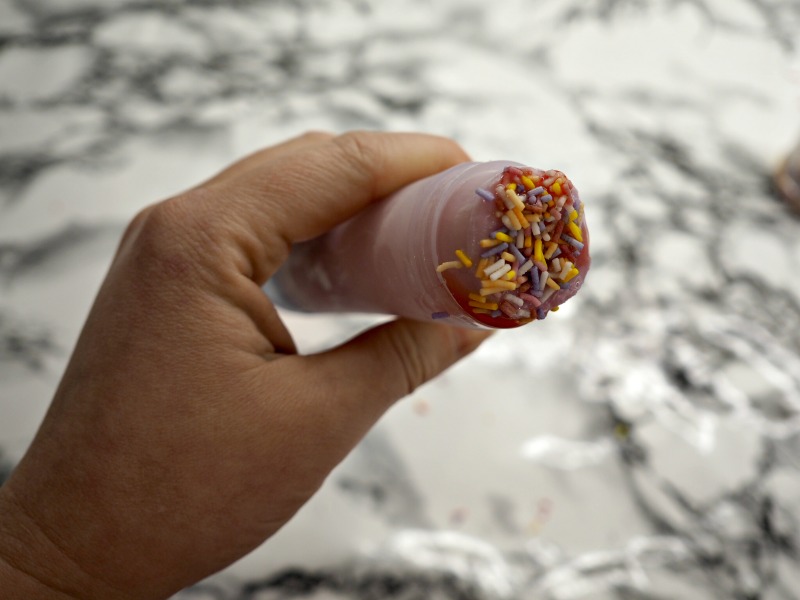 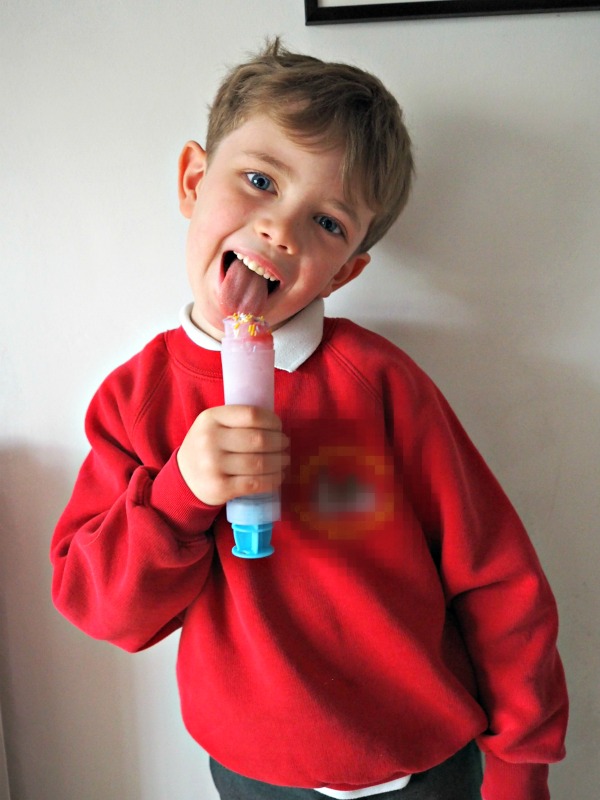 What did we think?

At first attempt, as you will see on the video, we made a couple of easy mistakes. We pulled the plunger too fast and so there was a big air space in our pop. We broke the seal easily which allowed the liquid to come out and did it again when trying to take the handle off before freezing. However, we learnt from our mistakes and easily rectified our technique and didn’t have these problems again.

I found it really easy to use in the end and Bear loved that he could do it on his own and has gone on to make them again and again. They will obviously come into their own at summer time and I’m looking forward to making some home made smoothies with hidden veg and getting some extra sneaky vitamins into my son.

I’m considering trying it with wine and soda and will let you know how that works!

I would definitely recommend the Chillfactor Pull Pops kit which retails at £9.99 for the set of 2 or £4.99 individually.

Disclosure: We were sent the Chillfactor Pull Pops kit for the purpose of this review, however, as always, all thoughts and opinions are our own. 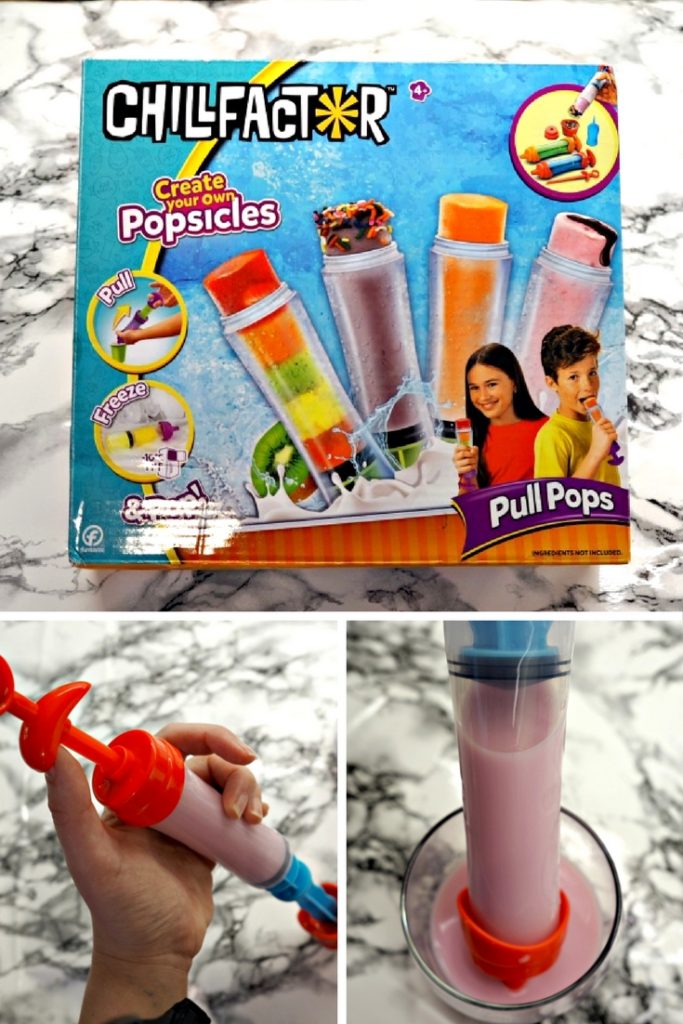