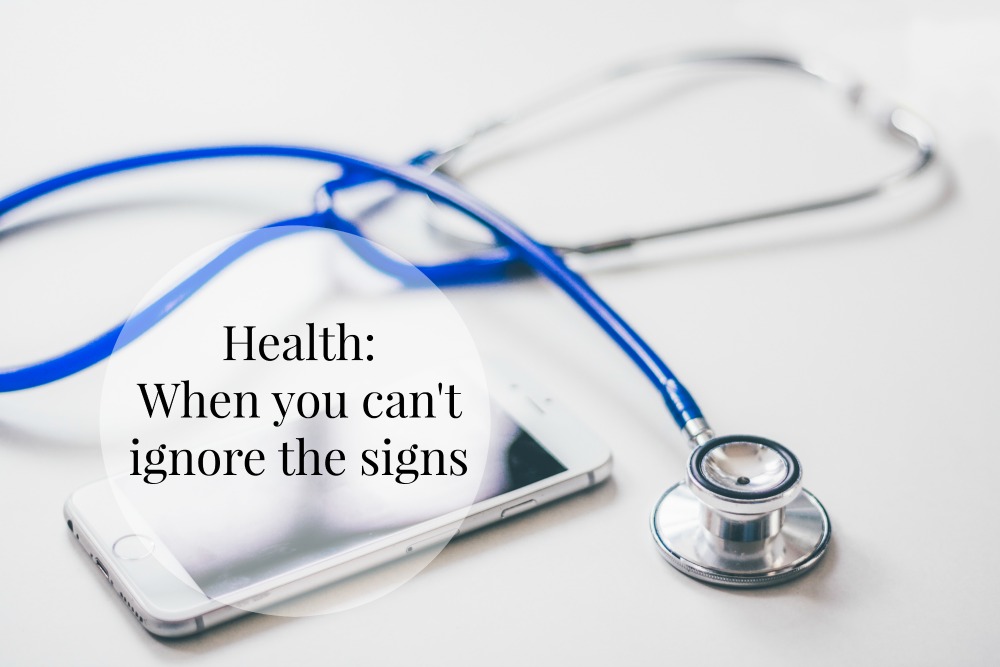 When you can’t ignore the signs.

Most of you know that I am not in the best of health. If you don’t but you want to know more, I tell my story in two parts. Part 1 and Part 2. It’s taken a long time to finally get diagnosed and treated, and in some ways, I’m still in that process now, over 4 years on. It gets quite wearing I have to say. I do, for the most part, just try to get on with life and live it as fully as I can but I obviously feel quite fed up. Before my pregnancy in 2011, I was in great health. I worked full time and went to the gym, travelled the world and enjoyed skiing, scuba diving, water skiing, hiking, you name it.

Anyway. When you have a list of conditions including Sero Negative Inflammatory Arthritis, Fibromyalgia, Chronic Fatigue and Hypermobilty a bad back and pelvis, you kind of think that that’s surely enough. These conditions are a lot to deal with and all the meds that come with them add on their own side effects. Due to being on my own with a young child, I’ve not been able to get back to work but as my health stabilises and my son gets older and starts school, I hope to be able to find a job anywhere, doing quite frankly, anything.

So. I thought I had enough to deal with. How many conditions can one person have? My life, to me, sounds ridiculous, let alone someone else. I had a bad experience with an on line Mum’s group who thought I was faking my ill health, Post Natal Depression and my husband leaving and since then have wondered if other people might think the same. Coupled with Bear’s not too great ENT health and people might think I have Munchausen’s syndrome or something.

But, such is life that I’ve had a couple of new health warning signs to deal with. One that I’ve had for at least a year and haven’t thought much about and one that has become more severe over the last couple of months.

The first thing I noticed was a small off white watch in my left under eye area – shining brightly like a beacon in my huge dark eye bags. It has slowly grown over the last year or so but as it’s so noticeable to me, I presumed that one of the dr’s I see must have clocked it and knew that it wasn’t serious and so didn’t mention it. 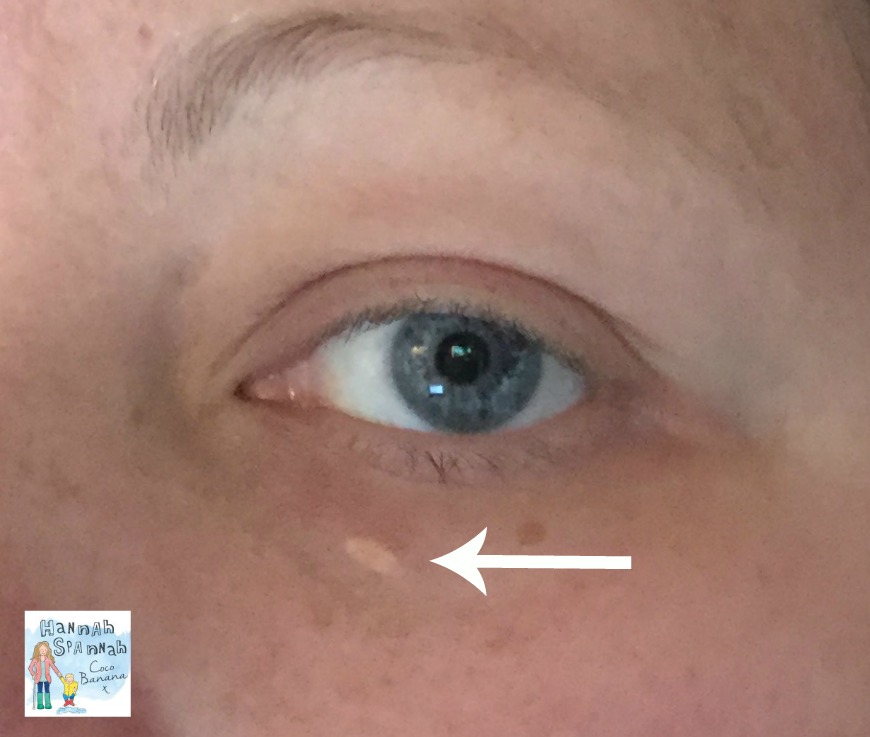 Well. a couple of weeks ago, it came into my head at night when I was sat in front of mr Google and so I did some research. All the search results pointed to it being a possible symptom of Familial Hypercholesterolaemia which can in turn lead to heart disease. Oh Joy. I didn’t panic but obviously thought I should mention it to my dr but I felt silly going about a discolouration on my face. It didn’t hurt or itch and wasn’t anything like skin cancer so if she was then to tell me that it was just part of getting old or something, I’d feel like a right hypochondriac! I decided I would mention it next time I went for a visit to the dr’s but that I’d not make a special trip.

The other thing that had been happening was that my boobs had been k i l l i n g me. They were sore all of the time, if Bear banged me, or lent his elbow on either but especially the right, they really hurt. More so than can be usual. Taking my bra off at night wasn’t a release that a lot of women talk about, but in fact, it really hurt as my chest took their full weight. I put it down to them being bigger than before pregnancy and that losing weight would help.
The pain continued and there was no ebb and flo. It was unlikely to be a normal hormonal thing as I take a progesterone only contraception pill that has stopped my periods as a treatment for endometriosis. Again, it wasn’t anything that I felt I needed to mention to the dr as I know that pain is rarely a symptom of anything sinister going on, such as the big C.

A couple of weeks ago, the pain on the right especially was excruititing and when I squeezed out a cloth, the pain was so much worse. As it had become so very painful, pretty much all the time, I thought, ok, time to mention it just in case there was an easy fix but it could wait until next week.
The pain increased and I can only describe it as the feeling you get when you’re engorged during breastfeeding. Feeling fit to burst, heavy and hot and the shape of my right breast was changing. It was larger and fuller than before and in comparison to the left.
I was checking my breast for lumps regularly in case I had a cyst or something but this became unbearable. That weekend though, I noticed a clear liquid from the right.

That’s when I did what you shouldn’t do and hit Google. Hmmmmm. That was fun. A couple of things such as the pain pointed to something such as hormones or a strange drug side effect but the enlarging of one breast and the clear discharge were not symptoms that could easily be explained away and every website, although reassuring that it didn’t necessarily mean that it was, couldn’t not mention the word cancer.

Again, I didn’t panic, it was more than likely nothing but I figured I’d visit the dr that week and mention it. I did try to get an appointment but due to one thing or another, there were either no appointments by the time I got through the 8.30am telephone queue or I forgot to ring.

Then, the pain went away. Not fully, but reduced greatly…….then I found a lump. I wasn’t sure but I asked my Mum to feel where I had and she could feel it too. (We’re very close, she used to be a nurse and I am not shy with my body at all!)

So, I managed to get an appointment and off to the Dr’s I went.

First I mentioned the discoloured lump/spot/area under my eye and the dr immediately said that yes, it was a Xanthelasma and that it can be linked to high cholesterol, Hypercholestrameia or a lipid problem (although not always). A fasting blood test was booked and she asked if there was any history of heart disease in the family. Well, yes there is. My maternal grandfather died of a heart attack, my maternal grandmother has been in heart failure for a couple of years (although she is in her 90’s), my Dad has had 3 or 4 heart attacks and a stent fitted and may need another and my mum takes statins. So yes. Big fat yes. Marvellous. The test is next week so fingers crossed my cholesterol isn’t too high. It’s time to get on top of my diet regardless though.

Then I mentioned my breasts. She agreed that the pain was probably nothing to worry about and as a symptom on its own, they’d probably not do too much about it but with my mentioning that I could feel a lump and the clear discharge, she’d do an exam and take it from there.

Again, it didn’t really bother me. I lay down with my top half unclothed and the Dr asked me to raise one arm above my head as she examined me and then the other as she examined the other side.
To begin with, she said that everything felt fine but then she too, like me and Mum, felt a hard like pea on the right. The next question was “Is there any history of breast cancer in your family?” and thankfully, touch wood, the answer is no.
However, I received a referral to the breast clinic which is standard procedure if the Dr feels a lump. I got an appointment through quicker than my bloods actually and so am there on Friday for I imagine, an examination and mammogram? I’m not really sure.

How do I feel about all this? To be honest, ok. Of course I have laid in bed at night and had one or two thoughts of ‘what if?’ I think it’s only natural. More so for my son than anything. What would happen to him and how worried I’d be that he would lose touch with my family if anything were to happen to me but those thoughts are quickly out of my head as they are unbearable. There’s no point worrying unless I need to.

Fingers crossed none of the symptoms will end up being a condition to deal with. I really could do without something else.