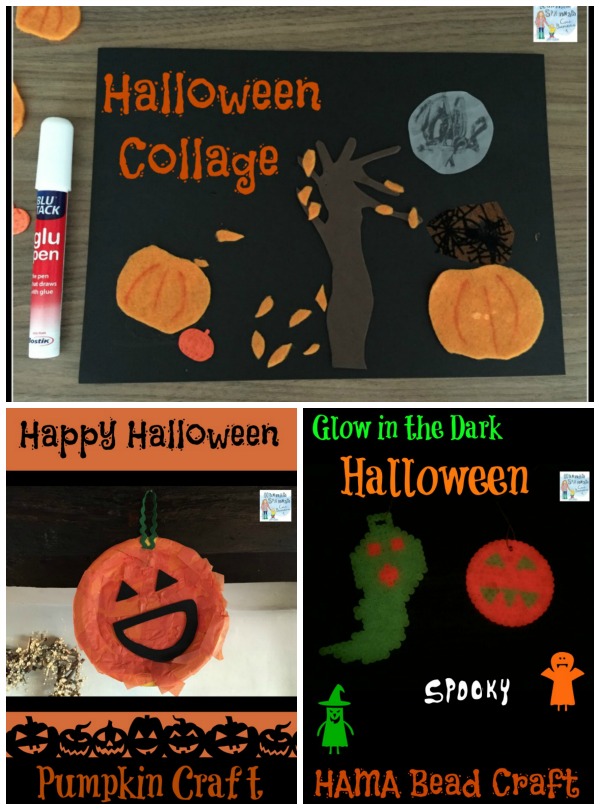 You know, we are really lucky sometimes. Little man and I love to craft and make things using different media but it can be expensive and you often have to buy more than you need which is frustrating.

Bostik, the people behind blu tac / white tac and lots of different glues and sticky pads, sent us a brilliant mix up box of things to craft with for Halloween and two of their products to try out.

So, we began with the most obvious and easiest – a pumpkin! Little man is only 3 years old so we are still keeping things quite happy as somehow he has the idea of Monsters which make him upset and so we don’t need more to scare him! 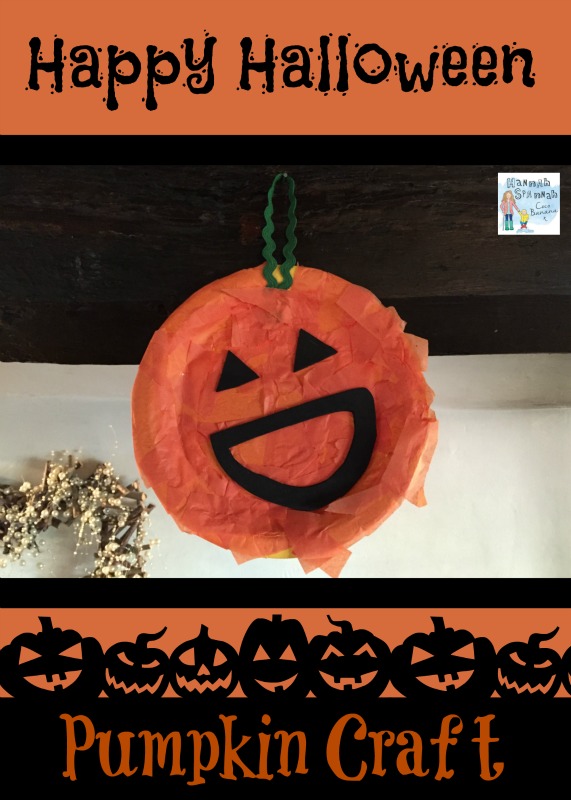 We started off with a large piece of black crafting foam – A4 size but smaller would be fine and even card or paper would work.

Some orange tissue paper, some green ribbon, a paper plate and Bostik foam pads and Glue Pen. This was the first time that we had tried either of the glue products. 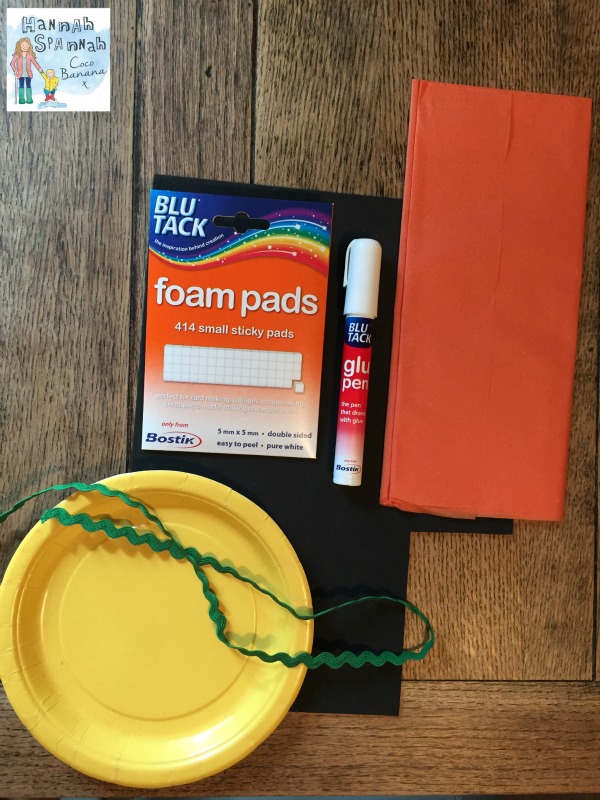 My little man can use scissors but wasn’t in the mood today (he prefers to cut just as we need to go out out or when it’s time to eat. Anytime other than when it’s offered to him on a plate – literally!) So, I cut out the pumpkin 2 triangle eyes and a big smiley mouth. I cut and tore lots of tissue paper, cut the ribbon to the right size and then called little man.

We applied glue to the plate where we wanted the ribbon to be. The pen is so good and is going to be a permanent addition to our craft box. It’s so easy to use and it makes no mess! Don’t get me wrong, kids could still stick a lot of things together that you don’t want them too (!) but it doesn’t ‘run’ anywhere or come out in a bog blob like other glues. You pump the pen a couple of times to begin with and then that’s it, you can use it like a pen. It would be really good for kids to write their name with and then sprinkle glitter on but that’s for another day!

Anyway. The pumpkin. Glue for the ribbon. But to make it stay in place immediately, we used a sticky foam square to attach it. That would actually have been enough on it’s own but I’d never used them before so didn’t know!

Little man then drew with the glue pen, all over the plate and then stuck the tissue on. He then stuck the face on and we reinforced where the ribbon was attached. Tadaa!! A happy hanging pumpkin.

Our next craft was a Halloween Collage. 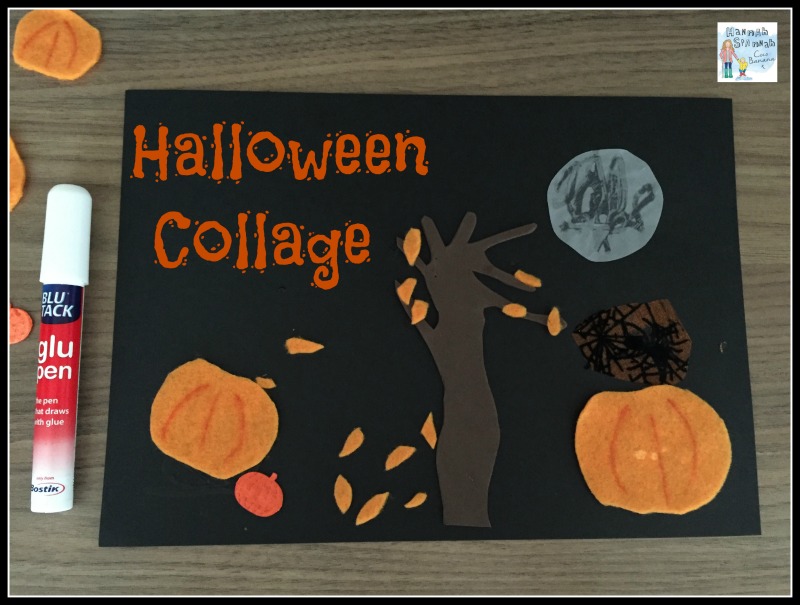 Again, I prepped the details in advance. You could use anything you have to hand – that’s the whole beauty of a collage. Anything goes!

I cut out a tree shape from brown craft foam, different sized pumpkins from orange felt, some orange felt leaves, a moon, some pumpkins off an amazing ribbon and a spider and web or two. A piece of black card for the background and the Bostik Glue pen again. Fab.

Little man loved this craft. He was able to do it all himself without any help and I love the finished picture. 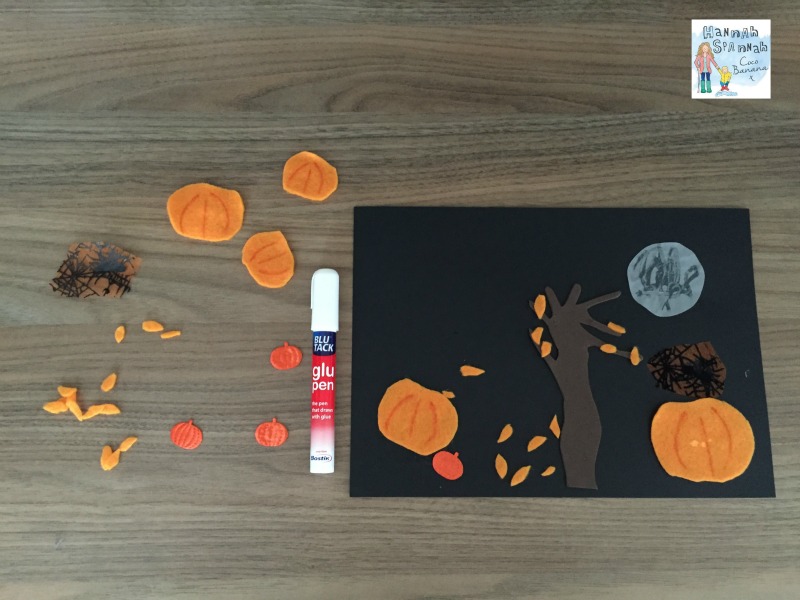 Our final craft was a little more technical and more suited to older children, however, little man handed me the coloured beads that I asked for and helped me place some when I showed him where to put them. I’m talking about….. 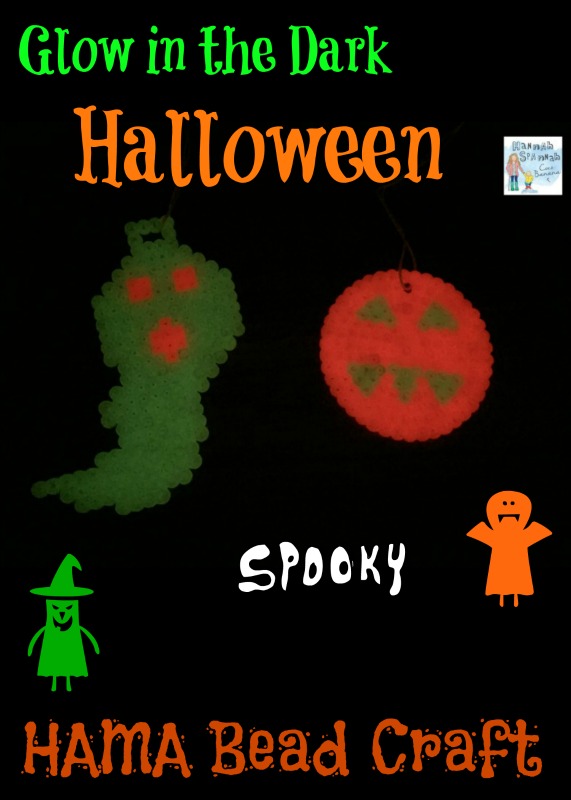 The craft box contained Glow In The Dark Hama / iron beads! Wow! They supplied a small circle base with them and we used that to create a pumpkin. It’s very important to note the whole that we left by missing one bead out. This is so that we can add string once it has been ‘ironed’ and cooled and then hang it from our trick or treat buckets!

If you’ve never heard of them, these craft beads are tiny plastic tubes. You can buy them in an array of colours from craft shops and online and also the bases that you need. These also come in different shapes such as butterflies and stars and larger ones for free hand. You make your pattern by putting the tube beads on the spikes on the base. These hold them in place until you have finished. You then cover the beads with a supplied piece of paper or some grease proof paper and then iron it gently until the beads begin to melt and stick together.

Next, we made a ghost which was a little trickier as it was free hand. If you would like to make it yourself but prefer a pattern to follow, I have included a Free Printable Hama Bead Pattern for this ghost. Click Here

It’s quite hard to see but I added extra beads to this one to make a loop that we can again thread string through in order to hang it. Little man decided that he didn’t like the ghost but the pumpkin is nice! 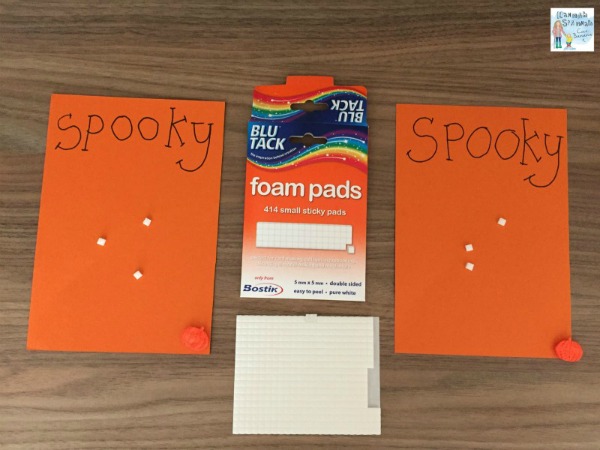 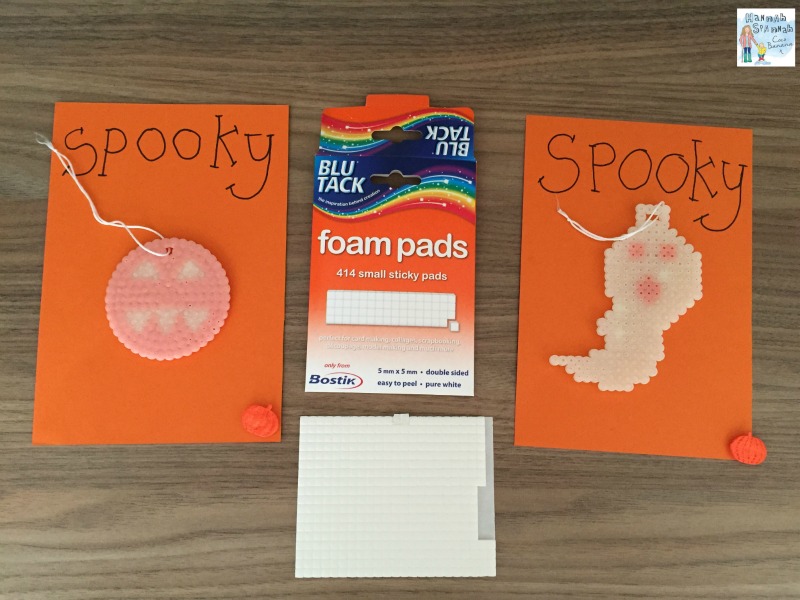 I hope you like the look of our crafts and will give them a go with your children.