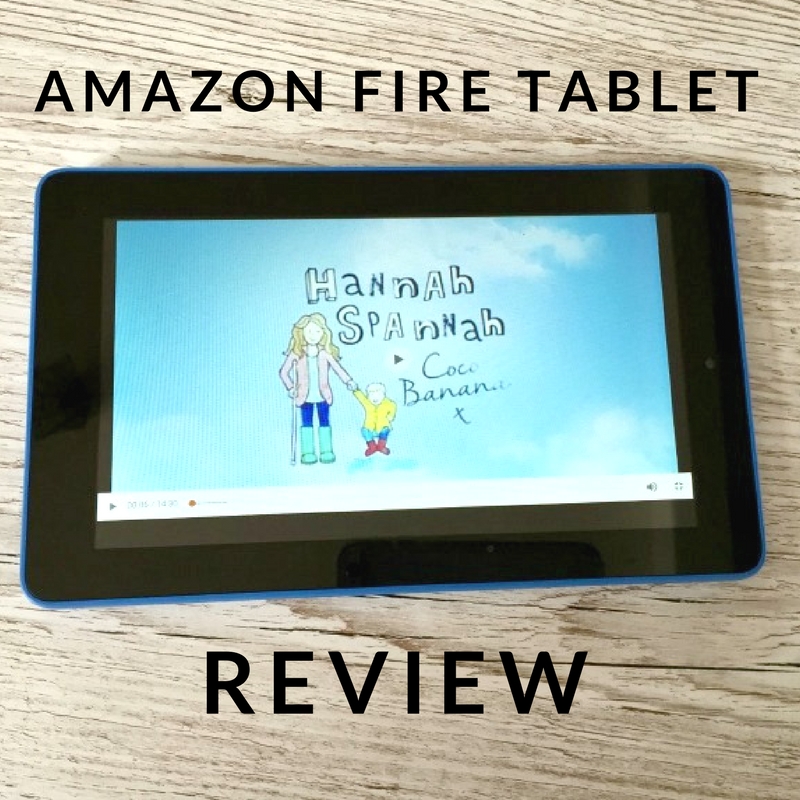 I love technology. I love my gadgets. Once upon a time, we had a tablet computer in my house but I lost that in the divorce (let’s not discuss that) and since then, I hadn’t had the spare cash to buy one. We were recently sent a Amazon Fire Tablet to review and I really wasn’t sure what to think.

Part of me just thought, oh no, what have I done, as my son, Bear, was so excited to receive it.

I think most parents have an internal struggle about their children and electrical devices, be it the television, computers or tablets. Bear goes through fazes, but we are in a particularly ‘fond of’ game consoles faze right now. However, it was almost the Easter Holidays when it arrived and so I relented and let him spend time on it as we were out and about a lot, most days.

Once he got his hands on it, it was his.

The Amazon Fire Tablet had arrived.

When it first arrived, I decided to open it when he was at school which was a good decision. I signed in with my amazon email and password and it was immediately set up and ready to go. It comes preloaded with lots of apps such as calculator, email that you can sync your accounts to, books, films, apps, etc. You can set up different user profiles including specific child profiles but it asked me to sign up to ‘Fire Kids’ for £3.99 a month and at this point, I didn’t know if I needed to or not.

I decided I would just set up my profile and download apps for him to use, on that profile. I was thinking of it as similar to my popular fruit named phone. I thought I would see how easy it would be for Bear to download a movie and spend my money and it was ridiculously easy. I had hoped it would come up with a warning such as ‘you are about to buy this movie, are you sure?’ but it didn’t – suddenly I had rented the BFG for 48hrs! This terrified me.

I continued to set the Fire Tablet up for my usage. I easily found a couple of free books to download to use it as a Kindle which I was really excited about as I don’t have one. 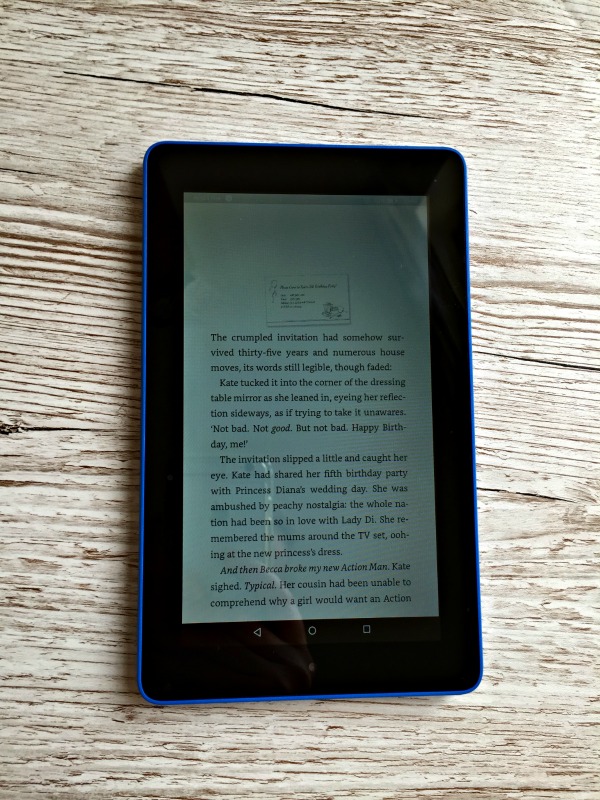 I also went ahead and downloaded a suggested starter pack of free app’s and customised it before hand so that I just got the suggestions I really wanted. I added a few more to it and before I knew it, I had the Fire Tablet set up, ready for my use as a Kindle, a social media browser, for catch up tv, email’s and also to watch youtube on. 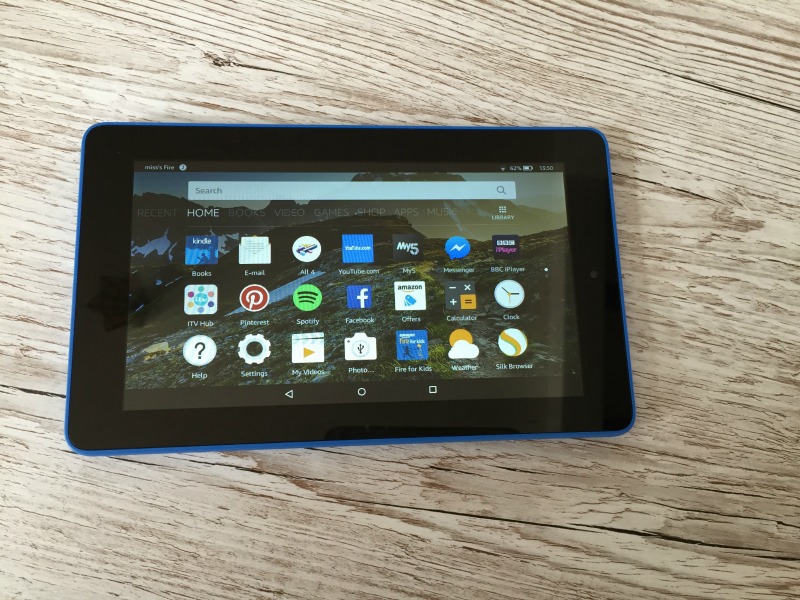 I was looking in the app store for games for Bear etc but I was still worried about leaving him unattended with the tablet and finding out how much ‘I’ had spent on ‘in app’ purchases half an hour later.

I explored the Fire Tablet a bit more and set up the password so that Bear couldn’t go on it without my say so, but the more I thought about it, I decided that I would take advantage of the Fire Kids first month free offer and see what it was like. 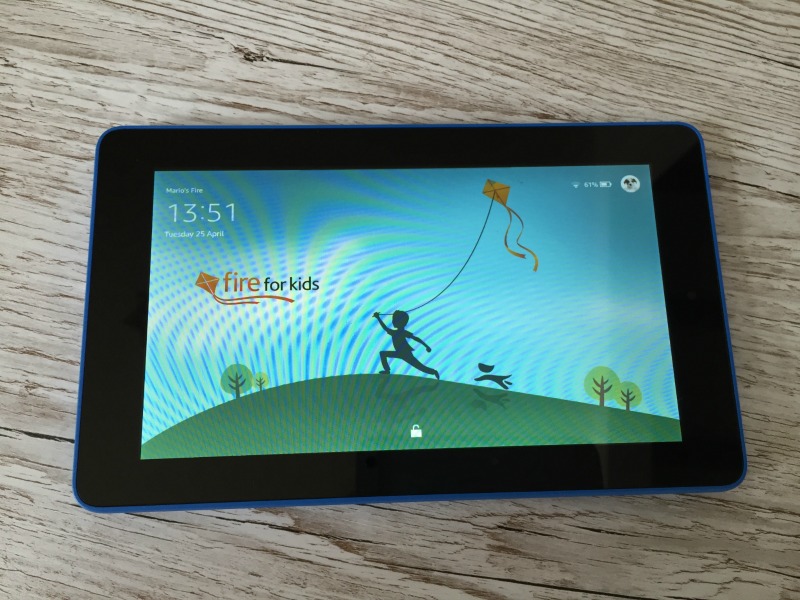 I was so glad that I did – the first month is free and then it’s only £3.99 a month thereafter and for what I have seen so far, they get a lot for your money.

I set up a profile for Bear, under his new alter ego of Mario (yes, as in Super Mario, don’t ask), chose the appropriate age group for him so that only age appropriate content was available to him and dove in.

I am honestly really impressed. If Bear tries to get into the Fire Tablet under my profile, he is asked to enter the password but if he changes to his profile (which is really easy to do) it is immediately unlocked and he can access his area. 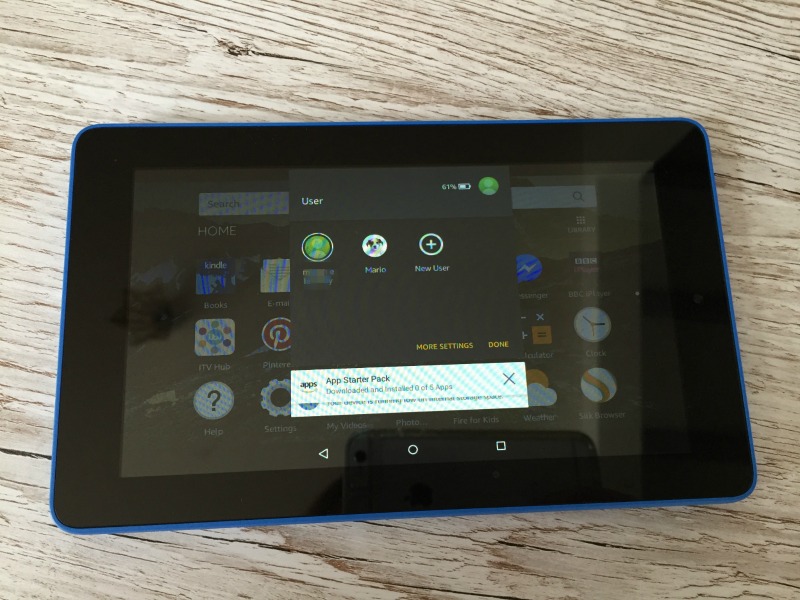 When you open that profile, you reach this screen, with Home, Books, Videos, Characters and Browser if you choose.

The pictures you see below, are of games in the carousel – these are the ones that have been played with most recently and you can remove them from this area by pressing and holding until the option to remove comes up. 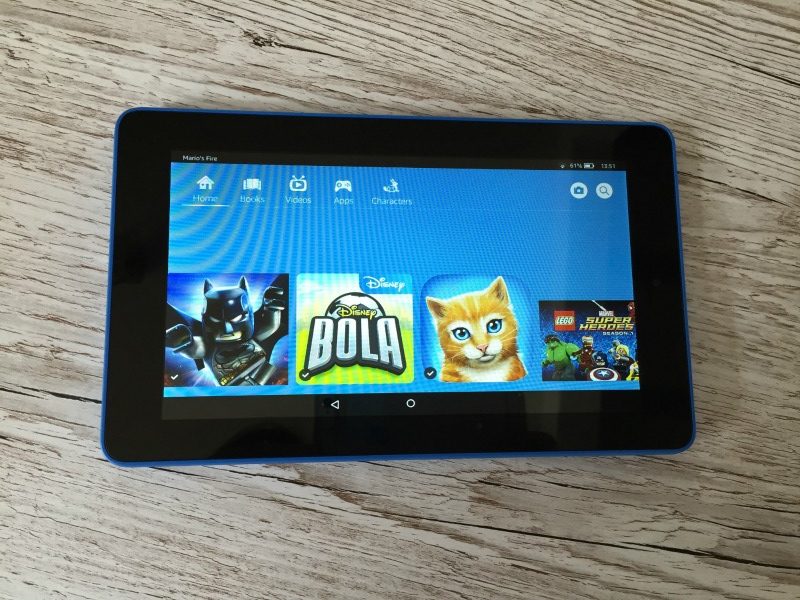 I was so impressed with the books that are available – there are more titles and genres than I could ever tell you about but they had popular books such as the Harry Potter Series for older children, lots of interesting and educational books about space, animals, vehicles, science, the human body and other categories and well loved favourites such as Mog and the Mr Men series. There are so many! I also found that if you click the Characters tab, you will see an icon that says ‘Read to me’. The books that are available here, are wide and diverse but are spoken books so that if your child cannot read yet and you are giving them the tablet whilst you get some jobs done, they can listen to some fantastic and well loved stories. 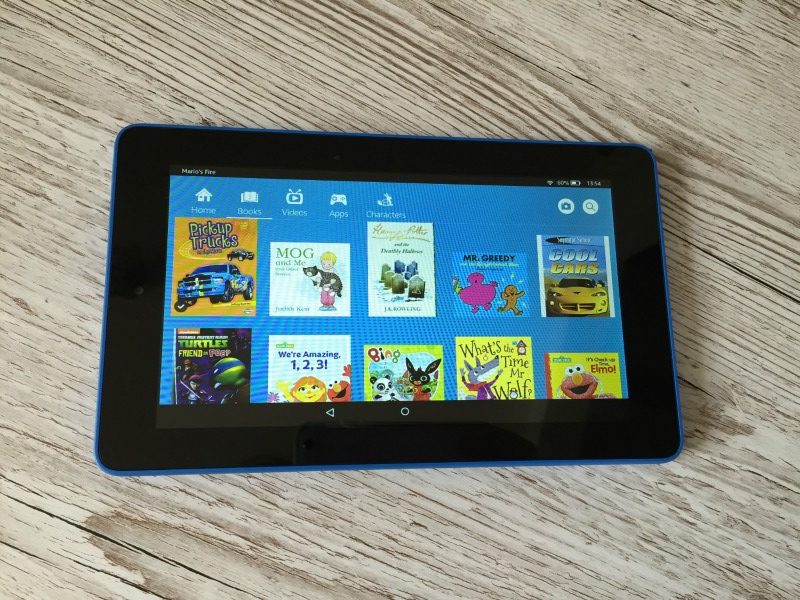 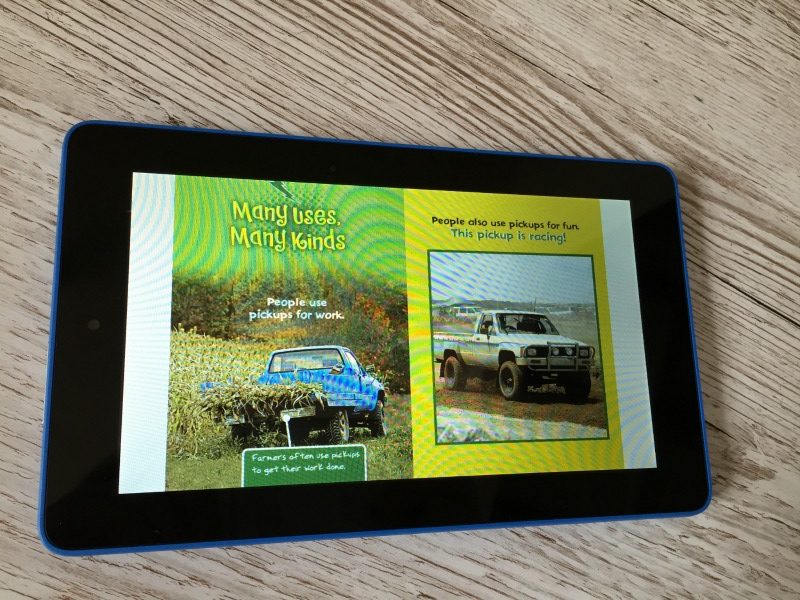 There are lots of different types of shows under the video category. Again, there are so many massive hits such as Paw Patrol, Lego Batman, Peppa, Sponge Bob, Fireman Sam – you name it. The only disappointing thing is that you can’t download them to watch them later – you need wifi to be able to watch them. This is fine but for travelling, it would be nice to have the odd show for emergencies. You can access the games and books that you have downloaded when you don’t have wifi though so it’s not as if you have nothing for plane journeys etc. 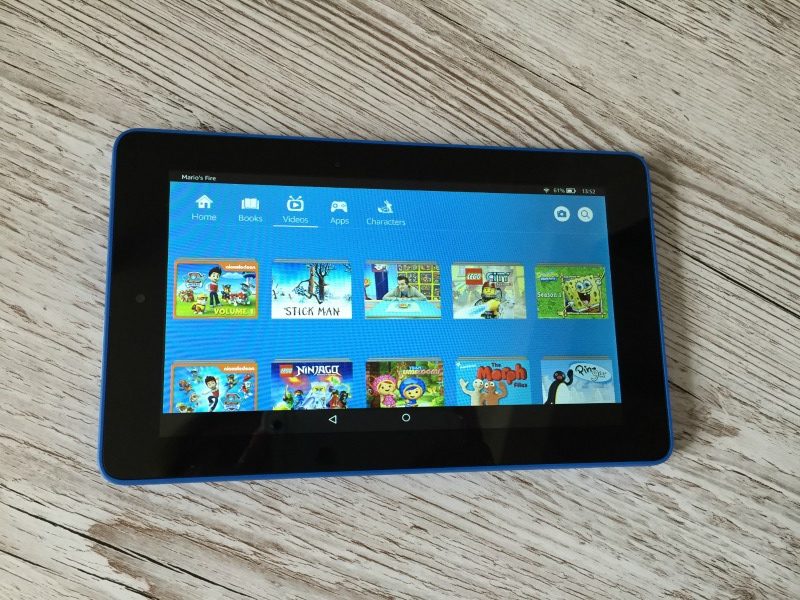 The games choices are excellent. A bit too good as Bear wants to play Lego Batman 24/7! We’ve found a football game, car racing games, strategy platform games such as the Lego games and they also have Sims like games where you are taking care of a menagerie of pets that need feeding, grooming, cleaning etc.

Even if you or your child don’t really know what you are looking for, once you have set up Fire Kids, you can search through books, videos and apps or if your child has a favourite, by character and then once chosen, the available books, games and or video’s will be shown.

Your most recent viewed will be on the opening carousel and under the Home tab but you can remove these as and when you feel necessary.

You download the games, as you do books, and they take up some of the memory space on the Fire Tablet but again, I have been impressed that Bear has a good few games and books under his profile and I have a few apps and 2 new books and only now has the Tablet suggested that we need more space. Thankfully, the tablet’s storage capacity can be upgraded easily as it has a slot for a Micro SD card.

So as I mentioned at the beginning of this review, I struggle with how long I should be letting him play for etc but I found that under parental controls, I can set a weekday and weekend bedtime so that no matter how hard he tries, he cannot use the Fire Tablet between say, 6pm and 8am for example.

You can also limit how long your child can watch video’s, play games or read books, or not allow any entertainment until a certain amount of reading has been done etc. You can choose to enable or disable access to the web and if you do enable it, you are only enabling access to age appropriate sites. I had a quick browse and it’s great for finding suggested videos in a different language or for finding Science or History content and ultimately, you can set a password so that they cannot enter their profile without you unlocking it.

That’s the tablet and it’s use, but what about the Fire Tablet itself?

It feels well made and certainly not flimsy although I will definitely be getting a screen protector and case for it.

My only criticism would be the positioning of the on/off switch. It is on the top (or bottom)  if you hold it like a book, as in my first picture above but the Fire Kids mode makes you hold it horizontally and quite a few times, Bear has accidentally pressed and held it, turning it off, mid game. Now he’s fully aware of it and he makes sure that he has turned it the right way so that the off button in on the top of the left side and you can easily overcome it but it’s a bit of a shame.

The battery life seem quite fair although I don’t have anything to compare it to and I guess it all depends how much gaming and watching goes on compared to simply reading from it. We’ve not been disappointed by the battery life or thought it was short by any chance.

I really would recommend this tablet to pretty much anyone but especially for children. At Christmas, I often see parents asking “I’m about to buy my child’s first tablet. Should I buy a specific kids one or an adult one?” and I would always suggest the Fire Tablet as it offers so much for toddlers and younger children, right the way through to teenagers and adults. I’d see it as a challenge to see if my child could go through childhood with the one tablet! As far as technology stands at the moment, this offers everything.

So thank you Amazon, for sending us this Fire Tablet. I now have to buy another as Bear has claimed this one as his!

Thankfully though, and shockingly, the Fire Tablet 7 is available to purchase for £49.99.

I hope this was helpful if you are considering buying one.

Disclosure: I was sent the Fire Tablet for the purpose of this review and as always, all thoughts and opinions are my own. This post contains an affiliate link which means if you buy a tablet after clicking my link, I get a penny or two in commission.