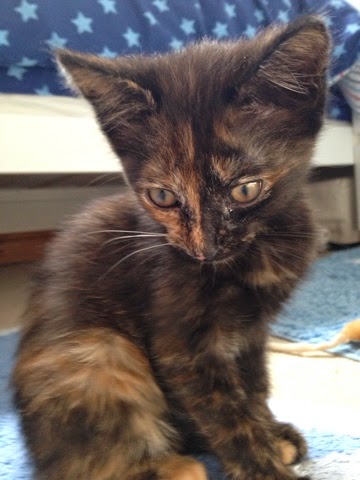 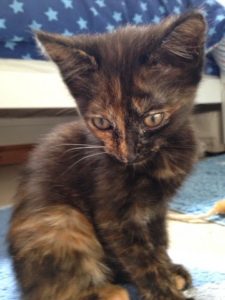 My health has been rubbish and has taken over my life for the last what, 8 weeks or  so?!
One thing that has been going on in the background that I haven’t mentioned is that  we have a new kitten! Yay! Little tiny furry baby!
Look how tiny she was?! She was born on May 4th 2014 and she was 9 weeks old when she first came.
She’s called Honey (Angus named her) and is such a funny and mischievous little monkey!
I already have a wonderful tom cat called Tiwi (he was a rescue cat and came with the name!) and as he’s 16 years old, I was a little worried as to how he would accept her.
I kept Honey in Angus’s bedroom with everything that she needed for the first week. They were both aware of each other but we introduced the two of them slowly, over the course of a week and things were….ok?!
Tiwi hissed at her a few times and just went outside but over the last three weeks, he’s begun to get used to her and I actually see much more of him than before. That’s a big bonus. 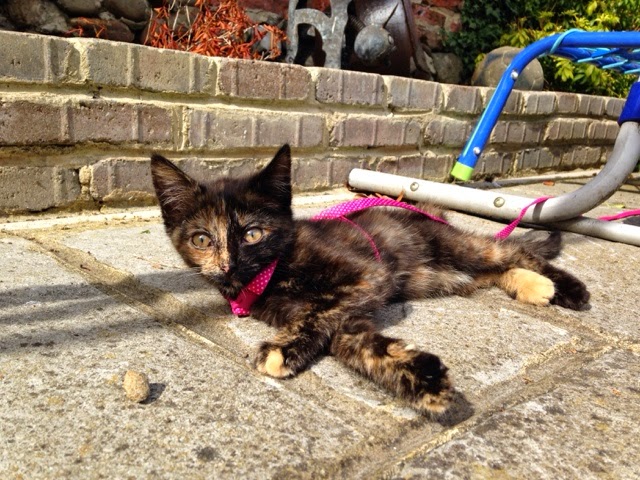 She’s vaccinated but until she has a microchip and has been spayed/neutered, I’m just letting her explore our garden and get used to ‘her’ environment on a harness. She really doesn’t seen bothered by it! I think because we started using it in the house straight away, she’s just used to it. 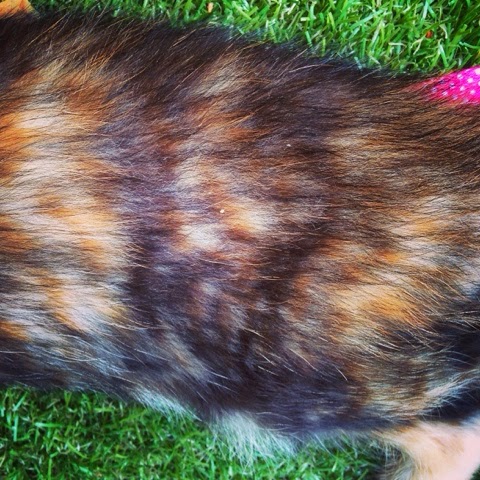 Honey runs all around the house like a typical kitten and flips, jumps, rolls, runs and weaves around Tiwi, at the same time, play tapping him whenever they are close.
Most evenings are spent like this;
but look! They have started to sleep together!! Oh my goodness, it’s what I wished for. 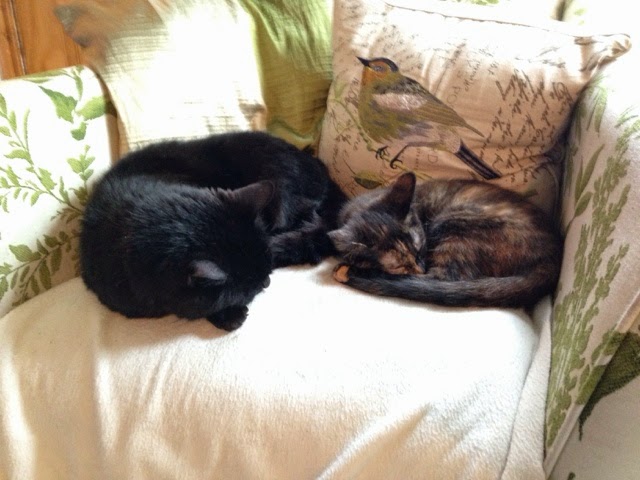 Most importantly, Angus has a little friend. He adores her! Sometimes a little too much but he has learnt how to carry her correctly and is the one that let’s her out of the kitchen every morning and gives her breakfast. (She sleeps in the kitchen as when she has the run of the house, she wakes us up at 5am by climbing the curtains and tearing around!).

Her worst trick is hiding. I have absolutely no idea where she hides but she has found a spot in my bedroom and she occasionally likes to go there and be completely silent. we can call her, tap her fork on her bowl, shake her toys, you name it, but she stays hidden. My mum has nearly been in tears once as she couldn’t find her and thought that Honey had somehow escaped, despite our vigilance with doors and windows. She has just done it to us now- Angus went into the garden and didn’t close the door behind him. After 45 minutes of shouting and rattling, she quietly walked down the stairs and jumped onto my knee! I was almost resigned to the fact that she had gone out but there she was. Monkey!

*Sadly I have to update this post as just before Christmas 2014, I had to make the heart wrenching decision to put Tiwi’s suffering to an end. He went to sleep peacefully and is buried in my garden. We all miss him so much but he had chronic renal failure and was very unwell. RIP darling Tiwi.